Researchers at the Annenberg School for Communication at the University of Pennsylvania discovered that watching advertisements that showing vaping can increase the desire of current and former smokers to pick up a conventional cigarette.

In the new study, published in the journal Health Communication, the researchers assessed the urge to smoke among 301 daily smokers, 272 intermittent smokers and 311 former smokers. They then had the participants watch three e-cigarette commercials. Some of the commercials showed vaping, and others did not.

After they viewed the advertisements, the men and women were once again asked about their urge to smoke. Their responses showed that the daily smokers who saw vaping ads had a greater desire to smoke a regular cigarette, and a higher likelihood of actually doing so during the experiment.

The former smokers who watched the advertisements with vaping were more likely to report decreased intention to abstain from smoking. Intermittent smokers showed no significant changes.

The researchers say the data suggests that watching the commercials with vaping could lead to actual smoking behaviors or interfere the ability of former smokers to refrain from picking up the habit again.

“The jury is still out on the efficacy of e-cigarettes to reduce tobacco use and tobacco smoking,” says study author and communication professor Joseph N. Cappella in a video about his study. “If it turns out to be the case that e-cigarettes are a good vehicle for reducing tobacco addiction, then we not want to stand in the way of advertising…but it doesn’t mean we couldn’t carry out that advertising without the vaping cues in order to not have these deleterious consequences.”

MORE: The Future of Smoking 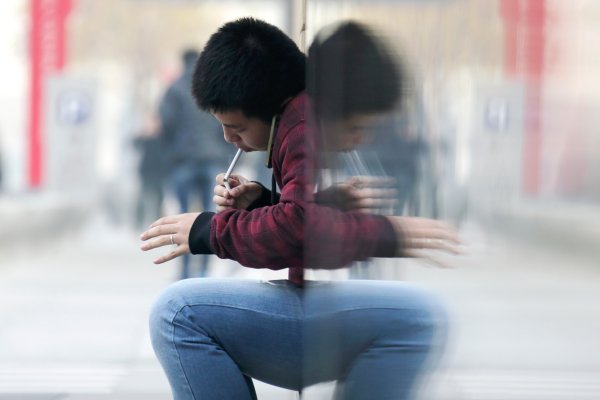 WHO Global Tobacco-Use-Reduction Target Likely Missed
Next Up: Editor's Pick