Keeping with a tradition on the “Jimmy Kimmel Live” show, President Obama read mean tweets about himself Thursday night. But compared to what he’s gotten from Congress, the tweets were fairly tame.

Obama himself made that point.

“I have to say, those weren’t that mean,” he told Kimmel after the segment. “I’ve gotta tell you, you should see what the Senate says about me all the time.”

For example: After the Charlie Hebdo terror attacks in France, Obama was criticized for not going there to show his support.

Texas Republican Rep. Randy Weber tweeted: “Even Adolph [sic] Hitler thought it more important than Obama to get to Paris (For all the wrong reasons.) Obama couldn’t do it for right reasons.” Weber later deleted the tweet and apologized.

But it wasn’t the first time. In a series of other tweets from January 2014, Weber called Obama the “Kommandant-in-Chief,” a “socialist dictator” and suggested that POTUS stands for “Poor Obama Trashed U.S.”

Some of the tweets aren’t so much mean as they are cutting in good sport. After Obama joked during the White House Correspondents Dinner in 2013 that Republican Sen. Mitch McConnell wouldn’t be a good drinking buddy, McConnell tweeted a picture of himself having a beer with an empty chair for Obama, complete with a glass of red wine and the message “Greetings from Coal Country!”

And sometimes the mean tweets are friendly fire. Democratic Rep. Marcy Kaptur once jokingly tweeted (and deleted) as the stock market hit a now high that Obama was the “worst socialist ever.”

Still, most of the meanest tweets come from off Capitol Hill. Businessman Donald Trump is a serial offender when it comes to saying mean things about Obama. Here he is blaming Obama for a bad call in the Super Bowl:

Even KitchenAid, a company that makes kitchen appliances, accidentally tweeted something mean about Obama. In 2012 someone tweeting for the company posted about the president’s grandmother, who died before he took office, “Obamas gma even knew it was going 2 b bad! ‘She died 3 days b4 he became president’. #nbcpolitics.” The company swiftly apologized for the tweet.

Correction: The original version of this story incorrectly described a series of tweets by Texas Republican Rep. Randy Weber. The tweets were sent in January 2014 and they are still online. 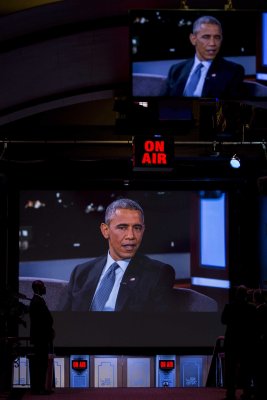