American Health Worker With Ebola Heading to U.S. for Treatment

An American health care worker who was infected with Ebola while working in Sierra Leone is heading home to the U.S. for treatment.

The patient is being flown from Sierra Leone to a specialized treatment unit at the National Institutes of Health in Bethesda, Md. The staff is expecting to admit the patient on Friday.

This is not the first patient with Ebola the NIH has treated during the recent outbreak. The staff also treated Nina Pham, one of the infected Dallas nurses who treated the first person diagnosed with Ebola in the United States, Thomas Eric Duncan. The NIH unit is one of only a handful in the U.S. designed to treat serious communicable diseases like Ebola. You can see a video of the unit here.

“NIH is taking every precaution to ensure the safety of our patients, NIH staff, and the public,” the NIH said in a statement.

Sierra Leone, where the American volunteer was working, is the West African country hardest hit by Ebola. Despite overall declines in Ebola cases in West Africa, the country had a small outbreak of the disease in February among a local community of fishermen, and has reported 11,677 cases to date. On Thursday, the World Health Organization released new numbers showing Ebola deaths have topped 10,000 and the number of cases in Sierra Leone, Liberia and Guinea has reached 24,350.

Though the region has experienced some good news, with Liberia releasing its last patient with confirmed Ebola in March, groups like Doctors Without Borders have warned the international community against getting complacent, telling TIME more coordinated contact tracing and surveillance is still needed. 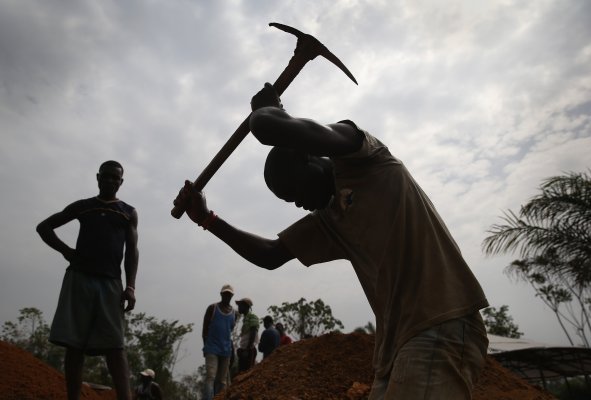