The Harsh Reality of Execution by Firing Squad

The firing squad execution chamber at the Utah State Prison in Draper, Utah in 2010.
Trent Nelson—AP
By Josh Sanburn

The Utah State Senate voted Tuesday to bring back firing squads if lethal injection drugs become unavailable, which would make it the only state in the union to allow the method.

Only three death row inmates have been executed by firing squad since 1976, all in Utah, with the last being Ronnie Lee Gardner in 2010. The method is considered cruel by many Americans; only 12% said they would be open to it in a 2014 NBC News poll. But experts say it may actually be the most effective way for states to execute inmates.

“Firing squad is the only execution method for which people are trained,” says Fordham University law professor Deborah Denno, who studies lethal injection and other execution methods. “It’s the most certain, the most expert way of executing and from all we know it would be the quickest.”

In previous executions, Utah has used five gunmen who each aim at the inmate’s heart. One of the executioners fires a blank, so it remains uncertain as to who fired the fatal shots. Any trained marksman willing to participate could theoretically be an executioner, whereas with lethal injections, prison officials or others with no certified medical training must hook up death row inmates to IVs.

There are few, if any, ways to determine how painful an execution by firing squad would be. But it does appear to bring about death more quickly than lethal injection. In 1977, when Gary Gilmore was the first person executed by firing squad in Utah following the moratorium on capital punishment in the U.S., a doctor pronounced Gilmore dead within two minutes.

There have been at least two firing squad executions that could be considered botched. One occurred in 1879, when Wallace Wilkerson moved just enough for the executioners to miss his heart. Another came in 1951 when gunmen misfired and hit inmate Eliseo Mares in the stomach and hip. But firing squads appear to have a much better track record than lethal injection. Last year, three lethal injection executions were considered botched.

“The death probably happens within seconds,” says Dr. Jonathan Groner, a pediatric surgeon at The Ohio State University who studies executions. “There is no way to measure the pain, but there’s anecdotal evidence that it’s less painful.”

Groner cites several lethal injections in the last year, including the executions of Clayton Lockett in Oklahoma and Dennis McGuire in Ohio, which resulted in prolonged deaths in which witnesses described the inmates groaning and writhing on the gurney.

But patients who die from heart complications can lose consciousness within seconds, he says. There is also a bizarre experiment from 1938 in which doctors monitored the electrical activity of the heart of a Utah man who was being executed, which showed that his heart essentially became inactive within about 20 seconds of the shots being fired.

But over the years, the public has largely decided that firing squad is cruel in a modern society that has the tools to put inmates to sleep, which often appears painless. Even Gardner’s brother, Randy, came out this week describing the brutality of Ronnie’s execution in 2010. Death by firing squad seems like an antiquated and crude practice, whereas death by lethal injection can appear comparatively humane—even though it’s unclear what sort of pain inmates are in. A number of legal challenges claim it fails the Eighth Amendment’s prohibition on cruel and unusual punishment.

“Is the firing squad needlessly cruel punishment? The executed cannot say,” says Joel Zivot, an Emory Healthcare anesthesiologist who studies executions and lethal injection. “These days, debates about methods of execution seem to be setting aside questions of cruelty evaluation and are more about having any method on hand.” 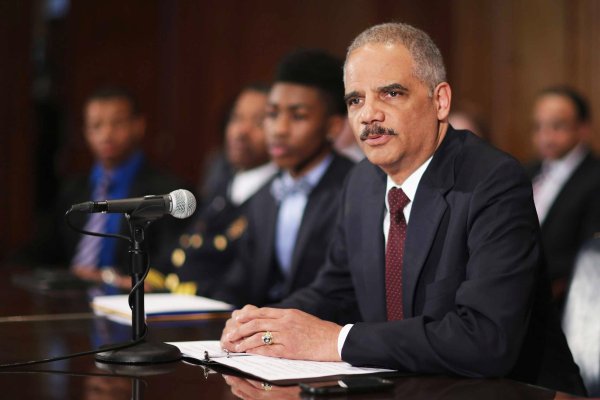 Ferguson Shooter Is a 'Damn Punk,' Says Attorney General
Next Up: Editor's Pick