Why West Africa Might Soon Have 100,000 More Measles Cases

There’s not a war college in the world that couldn’t learn a thing or two from the way viruses operate. They’re stealthy, they’re territorial, they seek and destroy and know just where to hit. And, just when you think you’ve got them beat, they forge an alliance with another of your enemies. That, according to a new paper published Thursday in Science, is what’s poised to happen with Ebola and measles—and it’s the babies and children of Africa who will overwhelmingly pay the price.

The Ebola epidemic is by no means over, but it is being contained and controlled. With nearly 24,000 cases and more than 9,800 fatalities so far—mostly in Guinea, Sierra Leone and Liberia—the epidemic is still claiming new victims, though more slowly. The crisis, however, has disrupted health-care delivery across the entire affected region, preventing children from receiving badly needed measles vaccines. That, the new study reports, could result in an additional 100,000 measles cases over the next 18 months, leading to an additional 2,000 to 16,000 deaths. Rates of vaccination against other diseases—particularly polio and tuberculosis—have fallen too. But measles’ ease of transmission makes it especially worrisome.

“When there’s a disruption of medical services, measles is always one of the first ones in the door,” says Justin Lessler, of the Johns Hopkins Bloomberg School of Public Health, a co-author of the paper. “The Ebola epidemic significantly increases the likelihood of a major measles outbreak occurring.”

Lessler and his co-authors arrived at their numbers painstakingly. First, they used health data to map and estimate the share of vaccinated and unvaccinated children in 5 km by 5 km (3.1 mi. by 3.1 mi.) squares across the three affected countries. They then estimated a 75% reduction in vaccination rates during the epidemic and projected forward by 6, 12 and 18 months. They factored in the transmissability of the virus within each region and estimated the likely number of deaths using what’s known as a Case Fatality Ratio—a mathematical tool that, as its name suggests, estimates lethality for any particular disease under any particular set of circumstances.

The final numbers—especially the potential 16,000 deaths—rightly alarmed the researchers, though lessler does admit that they are by no means a certainty. “The 75% decrease in vaccinations is a little too pessimistic,” he concedes. But the critical word in that admission is “little,” and the investigators did consider 25%, 50% and 100% rates too, before settling on 75% as at least the most plausible. No matter what, the odds are still high of a five figure death rate and a five to six figure additional case rate—and the Ebola epidemic, which led to the problem in the first place, has not even fully abated.

Lessler and his colleagues are not waiting until it does to sound the alarm, urging global health groups to mobilize a vaccination campaign now so it can be ready to launch in the affected areas the moment the Ebola all-clear sounds. The new push would first target children who were born during the Ebola epidemic since they would have likely received almost no medical attention at all up until that point, and then expand to all children in the most measles-susceptible age group—about 6 months to 5 years.

“The best time to start the campaign would be as soon as it’s logistically feasible,” says Lessler. “For every month no campaign begins, the risk of an outbreak occurring and the impact of such an outbreak worsens.”

The happy news, Lessler believes, is that done right, the campaign could not only prevent the measles epidemic from beginning, but could actually put West Africa in a better position than it was before Ebola, with vaccine coverage for measles and other diseases exceeding the pre-outbreak rates. “Previous campaigns have reached coverage in excess of 90%,” he says.

Correction: An earlier version of this story misidentified an assistant professor at the Johns Hopkins Bloomberg School of Public Health. He is Justin Lessler. 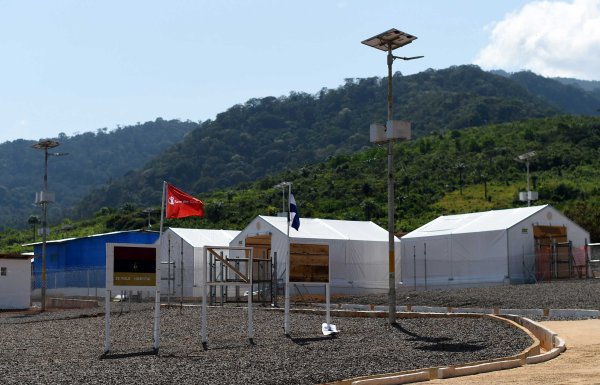 British Military Health Worker Has Ebola
Next Up: Editor's Pick