Why The Scarlet Letter Was a Mixed Blessing for Its Author

As a schoolboy, Nathaniel Hawthorne wrote secret stories in invisible ink (actually, skim milk), a habit that some biographers have considered symbolic of the anonymity he craved both in life and in literature.

The author, described by friends as “morbidly shy and reserved,” began writing at an early age, but remained on the margins of the literary world for years — partly by choice. He burned his first short-story collection after it was rejected by publishers, according to the New York Times. For him, writing was a solitary exercise, according to a book review published by TIME in 1946, which adds:

It wasn’t until this day, March 16, in 1850, that the publication of The Scarlet Letter launched Hawthorne into the literary limelight — at the advanced age (by 19th-century standards) of 45. The book, which became an instant bestseller, has been called one of the great American novels as well as America’s first psychological novel.

For Hawthorne, the book’s overnight success brought relief from both obscurity and penury. He had never made more than a meager living as a writer, and supported his family for a time by weighing coal and salt shipments at Boston’s Custom House.

But the financial relief was only temporary, according to The Atlantic, which published a number of Hawthorne’s essays and stories. “When Hawthorne died at the age of sixty, he was still having difficulty making ends meet,” a 2003 essay recalls. “He was also depressed, and was having trouble completing new projects.”

Nor did fame do much to bring the reclusive author out of his shell; if anything, it may have pushed him deeper inside it, as TIME explained, quoting a neighbor who caught only glimpses of the author, “dodging about amongst the trees on his hilltop as if he feared his neighbor’s eyes would catch him as he walked. A coy genius… Nobody gets a chance to speak with him unless by accident. He never calls on anyone, is seldom seen outside of his gate.”

Hawthorne himself looked back fondly on the poverty and obscurity of his early career, which laid the foundation for the writer, and the person, he later became. He wrote once in a letter to his wife, as quoted in TIME:

Read a full 1948 review of a Hawthorne biography, here in the TIME archives: A Real Man’s Life 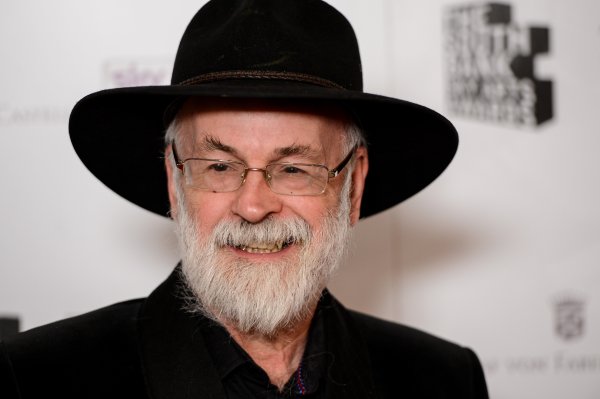 The Wit and Wisdom of Terry Pratchett
Next Up: Editor's Pick