The Historical Roots of Fraternity Racism

The response of the University of Oklahoma to the tape of its campus Sigma Alpha Epsilon (SAE) members cheerfully singing a vile racist chant has been one of shock and outrage. This has been reflected in public rallies on campus condemning the ugly racism on that tape and in the swift and decisive action by the university president David Boren in denouncing and closing down the offending fraternity. But while my initial reaction too was outrage at this racist display, as a historian who has researched segregationist student activism in the 1950s and 1960s South, my next thought was of how eerily familiar the fraternity behavior on that tape seemed to be.

The tape shows cheerful, white, well dressed frat boys repeatedly singing “You can hang him from a tree, but he’ll never sign with me. There will never be a [n—-r in] SAE.” What astonished me was how reminiscent this chant by Oklahoma fraternity members in 2015 was of the chant of segregationist fraternity members at the University of Georgia in January 1961. Though separated by more than a half century in both cases a lynching reference was combined with the chanting of a pledge to keep the segregationist fraternity tradition intact.

The only difference between the racist chants in 2015 and 1961 that I can discern is that the fraternities today seem more inclined to do their chanting in private. At Oklahoma this semester the chant came in what started out as a private fraternity setting (a bus apparently transporting fraternity members from some fraternity-related event). The privacy was, of course, violated by the leaking of the tape of the chant, but clearly the chant was not designed for public consumption. The Georgia chant, on the other hand, was made in public, at a segregationist rally at the campus historic archway entrance in January 1961 at the height of the university’s integration crisis. Some 150-200 Georgia students had just hung a black faced effigy of Hamilton Holmes, who along with Charlayne Hunter, had in January 1961 become the first African American student to attend the historically segregated University of Georgia. The white students first “serenaded the effigy with choruses of Dixie and then sang “There’ll never be a [n—-r] in the ________ fraternity house,” whose various names they inserted. Clearly, UGA students in 1961, operating in a historically segregated university and a segregated college town (Athens, Georgia) did not feel the pressure their 21st century fraternity counterparts do — at racially integrated campuses — to keep their racist displays to themselves. But if the venue was different the racist sentiment and mode of expression were virtually identical.

The coupling of lynching metaphors with the chanting of a segregationist pledge “never” to integrate is not accidental. Lynching symbolizes black powerlessness, while white pledges to sustain segregation permanently evoke the power and endurance of white supremacy. The implication seems to be that even if the university integrates the fraternity will remain an outpost of white supremacy and racial exclusion.

The similarity between the racist fraternity chants in these two centuries raises questions about fraternity history and culture that should be of as much interest to university presidents as to historians. It suggests that the responsibility for the ugly racist chant at the Oklahoma SAE rests not merely with the individuals who sang on that bus but the larger fraternity culture. How, we ought to ask, is it possible that these racist chants have endured for generations? Who is it that preserves such racist traditions and transmits them to each new college generation? This seems a clear case of cultural preservation, transmission, and reproduction. And it is all the more striking because this hoary racist tradition attracts adherents and admirers well into our century when modern science and social science have long since refuted white supremacist assumptions. Finally, we need to ask why even on racially integrated campuses, such as Oklahoma, fraternities remain so racially exclusive that such vintage segregationist chants can be sung so shamelessly. The historical roots of this racist fraternity tradition and the political, cultural and demographic props that sustain it must be understood and confronted honestly if the ghost of Jim Crow is ever to be banished from frat row.

Robert Cohen is a professor of Social Studies and History at New York University, co-editor with David J. Snyder of “Rebellion in Black and White: Southern Student Activism in the 1960s” and editor of “The Essential Mario Savio: Speeches and Writings That Changed America.”

Correction: The original version of this story misstated the author’s first name. It is Robert. 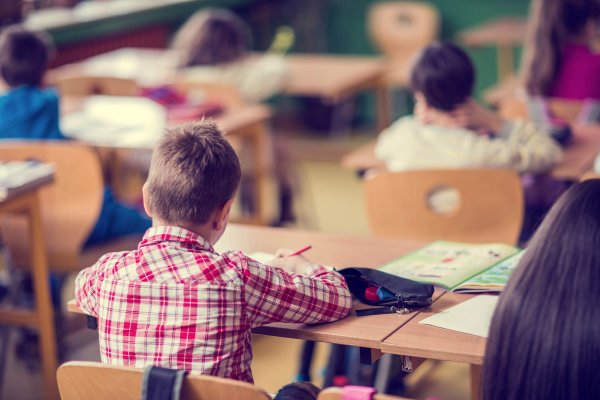 We're Not Doing Enough To End Hate Among Our Children
Next Up: Editor's Pick