The American Century Isn't Over

Ideas
By Bryan Walsh
Bryan Walsh is the author of End Times: A Brief Guide to the End of the World. Previously, he was TIME’s International Editor, its energy and environmental correspondent and was the Tokyo bureau chief in 2006 and 2007. He lives in New York.

As Harvard political scientist Joseph Nye takes a seat, he glances at the portrait that looms over the conference room. “There he is,” says Nye.

“He” is Henry Luce, the founder of TIME and LIFE magazines. (Hence the portrait–we’re at TIME’s offices.) In a 1941 editorial in LIFE, Luce urged the U.S. to enter World War II to defend democratic values and “create the first great American century.”

That term became shorthand for the period of U.S. geopolitical dominance that began around the end of the war. But from the moment the American century was born, Americans have fretted over threats to the country’s pre-eminence. In the 1950s the Soviet Union seemed poised to bury the U.S.; in the 1980s the Japanese were going to outwork lazy Americans.

Today a rising China is the great rival. A 2013 Pew poll of 39 countries found that most people believed China already was or would eventually become the world’s leading superpower–and that included nearly half of Americans.

To which Nye says: Not so fast. A pioneer in the theory of soft power and the dean of American political scientists, Nye knows geopolitics. In his new book, Is the American Century Over?, Nye makes a strong case that American geopolitical superiority, far from being eclipsed, is still firmly in place and set to endure. And the biggest threat isn’t China or India or Russia–it’s America itself.

It’s easy to forget what a global behemoth the U.S. remains today. Take military power: the U.S. not only spends four times more on defense than the No. 2 country, China, but it also spends more than the next eight countries combined. The U.S. Navy controls the seas, and the country’s military has troops on every inhabited continent. America’s armed forces have become more dominant since the dawn of Luce’s American century–not less. For nearly 50 years after World War II, U.S. power was checked by the Soviet Union. No longer.

The relative decline of American economic clout might seem obvious. By one measurement, China has already passed the U.S. to become the world’s largest economy. But that’s in part a trick of perspective. In 1945, thanks largely to the devastation of World War II, the U.S. produced nearly half the world’s GDP. By 1970 that share had fallen to about one-quarter, but as Nye points out, that was less a matter of American decline than a global return to normality. Nearly half of the top 500 international companies are owned by U.S. citizens, and 19 of the top 25 global brands are American.

But the most important reason the U.S. will continue to dominate is the lack of a viable rival. Nye dismisses each in turn: the European Union is too fractured, Japan is too old, Russia is too corrupt, India is too poor, Brazil is too unproductive.

As for China, Nye expects that as the country keeps growing, it will take up more space on the international stage. But Beijing faces major internal challenges that could derail its rise: a polluted environment, an aging population and inefficient state-owned industries. More important, China conspicuously lacks the ingredient that has made the U.S. unique–an openness toward immigrants. “As Lee Kuan Yew once told me,” Nye says, referring to the founding father of modern Singapore, “‘China can draw on a talent pool of 1.3 billion people, but the U.S. can draw on the world’s 7 billion.'”

It’s the potential loss of that openness that worries Nye. Should the U.S. decide to shut its borders or turn its back on international affairs–two recurring impulses in U.S. history–all bets are off. If political gridlock becomes permanent or income inequality keeps rising, that too could threaten American supremacy. “The question is whether we’ll keep living up to our potential,” says Nye.

He bets yes–and believes that on the whole, that’s a good thing for the world. A strong U.S. has helped keep tensions in check in East Asia and has worked to integrate a rising China into the existing international system. In July a NASA probe will visit Pluto for the first time ever, and our exploration of the solar system–led from start to finish by the U.S.–will be complete.

America is far from faultless: the invasion of Iraq and intransigence on climate change stand out as two major mistakes. But it’s difficult to imagine that the world would be a better place if Vladimir Putin’s Russia or Xi Jinping’s China were running things. “I believe this is a different country,” says Nye. Henry Luce couldn’t have said it better. 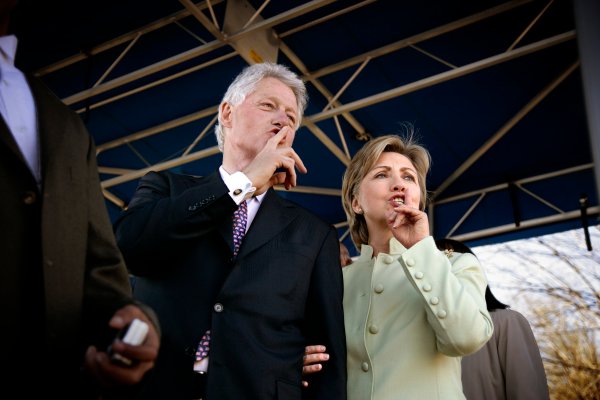 The Clinton Way
Next Up: Editor's Pick