Want to Keep Your Employees and Coworkers Happy? Say 'Thank You' Today

When I was young, every time I received a gift, writing a thank you note was an immediate requirement. I used to joke that if someone smiled at me, my mom would make me write a note. “You have to recognize people for the good they do,” she’d say. Years later, it’s my turn to thank her. From learning how good it feels to help someone succeed at work, to appreciating a friend for dropping everything to help you through an illness, there’s something so rewarding about recognition and gratitude. Especially in the workplace.

It used to be that a pat on the back or a gold watch at the end of forty years of service were the hallmarks of recognition. Or, perhaps, a shout out at the company’s annual meeting or a thoughtful “you’re doing a great job” at the end of a performance review. But along the way, we got lazy, talent went unappreciated, and then was recruited away. And companies realized they had to start appreciating the efforts and successes of their employees. Mom was right—the simple thank you is a powerful thing.

According to Bersin by Deloitte, over 75% of companies have recognition programs in a $46 billion market that includes trophies, software and yes, the gold watches. Add in incentives like performance bonuses and the market size swells to over $100 billion. That’s a lot of appreciation—especially when it comes to performance. No longer is it just about acknowledging tenure—it’s about saying thanks and providing recognition.

According to the Aberdeen Group: “Being able to track the effectiveness of engagement and recognition efforts can help organizations better align engagement with business objectives and improve performance.” Further, 41% of companies that use peer-to-peer recognition have seen positive increases in customer satisfaction.

Yet employees still aren’t satisfied. The Department of Labor found that 64% of Americans quit their jobs because they don’t feel appreciated. Our workforce research tells us that, too. In focus group after focus group, employees tell us how the day-to-day feedback they receive is developmental or critical with little gratitude or recognition for the good things they do.

Should it surprise us that companies are seemingly making an effort without little impact? Not at all. They’re expected to recognize employees. But like many workforce initiatives, recognition programs are broad, boring, and static. World at Work reports in their 2013 survey that most employee recognition programs haven’t changed since 2008. Since then, Apple has invented the iPhone and iPad, and yet we can’t find a better way to say thanks.

Companies need to step up. There is no shortage of great digital products they can invest in to drive recognition like TinyPulse, WooBoard, or TribeHR —all platforms providing direct recognition. But as my mom will tell you, it doesn’t have to be costly or complicated to say thanks. It also shouldn’t only be a formal top-down program. According to SHRM: “41% of companies that use peer-to-peer recognition have seen marked positive increases in customer satisfaction.” That means thanking your colleagues can have bottom line impact.

Started by Lars Schmidt, the Founder of Amplify Talent, #RTOK is a movement to say “thank you” publicly to the colleague, manager, or social media buddy who helped you learn, grow, or advance your career. Encouraged by his own growth and learning gleaned from others, Schmidt longed for a way to say thanks to those who impacted him.

The itch for personal recognition really started when he was an HR executive with Ticketmaster.

“My primary focus was global talent,” Schmidt says, “but during the merger with Live Nation I was asked to develop the internal communication strategy. My experience in internal communications was nowhere near the scale of this project. I had a sleepless night, then began leveraging my network and connecting with peers who’ve been through global mergers to see what they learned. I leveraged those learnings to design a strategy that was approved by the executives and successfully implemented. Despite the initial insomnia, it turned out to be one of the most fulfilling projects of my career.”

Sure, it’s easy to shoot off an email to say thanks in situations like this. But what if you could publicly recognize those you’ve learned from, who have helped you succeed or those whom you respect and admire in a free and simple way?

On March 11, Schmidt’s leading the charge in the second annual #RTOK. It’s easy—simply call out your thanks and praise using the hashtag #RTOK. You can thank a colleague, a friend or even someone you’ve learned from—an author, a thought leader, an executive—whom you’ve never met. And you can do so in a public way that allows others to become aware of your appreciation and of the person you’re appreciating.

As social media has become more prevalent (Twitter was only launched in 2006), the way we learn, grow, and succeed has changed. Before social media, you had to seek out assistance, advice, or guidance through email, a still-maturing World Wide Web, or (gasp!) the library; now, we’re learning so much and so frequently, and we often don’t have a chance to say thanks.

Schmidt, who launched #RTOK last year on a whim, is ready to make it an annual affair. “I’ve benefited tremendously through the relationships I’ve built, and the experience and insight I’ve learned, that I wanted to find a way to give back and say thanks to people who inspire me and/or are contributing to their field. There aren’t a lot of platforms for peer to peer public recognition, so the idea of creating a public day of thanks really resonated with me.”

Did last year’s effort work? Absolutely, Schmidt says, “Some knew how I felt, others were surprised and really appreciative about the sudden unexpected acknowledgment.”

And that’s what recognition truly is about. It’s not the expectedness of coming upon a work anniversary and picking out a gift, or getting the yearly, cursory thank you in a performance review. It’s a culture of thanks—a work ecosystem where gratitude is natural, and where we’re energized by recognition of those who support and help us in ways big and small. And the reality is, it can start with you, at work, now.

Want to participate in this year’s #RTOK? It’s easy. On March 11, simply thank someone who’s impacted your work life and career with the hashtag #RTOK. You can be sure @SusanLaMotte will be thanking @ThisIsLars for inspiring us to care. 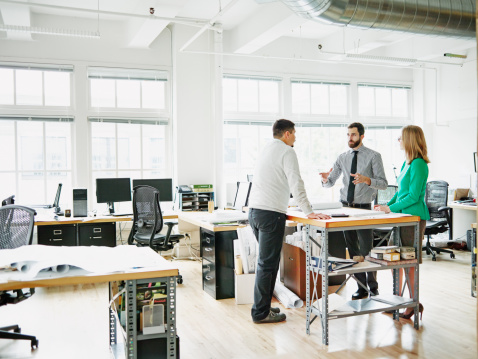 8 Ways to Get People to Listen to You
Next Up: Editor's Pick