Former Secretary of State Hillary Clinton admitted Tuesday that she discarded tens of thousands of emails from a private server kept at her New York home.

In her first extended public remarks about her exclusive use of a personal email account to conduct government business, Clinton was adamant that she complied with all applicable rules and said she went “above and beyond” by handing over some 30,000 work-related emails to the State Department.

But her admission that she did not turn over roughly half the messages in her private account and will not submit them to independent scrutiny will likely fan the controversy.

“At the end, I chose not to keep my private personal emails—emails about planning Chelsea’s wedding or my mother’s funeral arrangements, condolence notes to friends as well as yoga routines, family vacations, the other things you typically find in inboxes,” Clinton said, saying attorneys she paid categorized the correspondence.

“They were personal and private,” she added. “They had nothing to do with work. I didn’t see any reason to keep them.”

Under fire from pundits and political critics, Clinton called the unusual press conference—the most significant since she left office—to defend herself.

The former Secretary of State said that when she began the job, she made the decision to use her private address as a matter of “convenience.” She noted the “vast majority” of her work emails were sent to government employees on their official work accounts, and as a result, those messages are preserved and archived as public records on the other end.

“I thought it would be easier to carry just one device for my work and personal emails instead of two,” she said. “Looking back,” she added, “it might have been smarter to have two devices from the very beginning.”

The State Department said Tuesday that it is reviewing by hand 55,000 pages of emails supplied by Clinton. The Department will release emails from that cache on a publicly accessible website once it redacts information not covered by the Freedom of Information Act. The process is expected to take several months.

Clinton argued that when the State Department releases her messages, the American people would benefit from an inside view into her work. “I feel like once the American public begins to see the emails, they will have an unprecedented insight into a high government official’s daily communications, which I think will be quite interesting,” Clinton said.

But by deleting the private messages, Clinton has made it difficult, if not impossible, to verify whether there were any politically or personally sensitive matters she declined to turn over to State. “The server will remain private,” she said, when asked if she would make it available for independent review.

Clinton’s comments ended her conspicuous near-silence over the eight days since the New York Times revealed she had exclusively used a personal email account to conduct government business while serving as Secretary of State.

“I want the public to see my email,” Clinton said in a tweet last week in her only prior comment on the scandal. “I asked State to release them. They said they will review them for release as soon as possible.”

After the press conference, Rep. Trey Gowdy, a key Republican investigator, said he would call Clinton to testify on Capitol Hill “at least twice” to “clear up her role and resolve issues” related to the email controversy.

The ensuing controversy has forced Clinton into a defensive crouch as she is in the final stages of preparation before announcing her second presidential bid.

The brouhaha has extended to the White House, where President Barack Obama initially denied knowledge of Clinton’s private accounts, only for a spokesman to admit Monday that Obama had corresponded with her by email at the private address.

A White House spokesman said Tuesday it would be premature to judge whether the president would claim executive privilege to prevent the release of his emails with Clinton. “Let’s just let the State Department review that process under their regular order and then we can make a determination from there,” White House spokesman Eric Schultz said.

Clinton answered questions before about 100 reporters crammed into a hallway on the second floor of the United Nations, next to a reproduction of Pablo Picasso’s Guernica. The press conference followed a planned speech to a Women’s Empowerment Principles Event. Critics chided Clinton for the choice for venue, arguing the slow U.N. accreditation process and the late notice made it difficult for the media to attend the press conference.

“Hillary Clinton’s response to her email scandal is already turning into another exercise for limiting transparency,” said Republican National Committee spokesman Michael Short. “She and her team had perhaps hundreds—if not thousands—of options for a venue … but Clinton instead chose one of the most difficult places for reporters to get access to.”

During the press conference, Clinton also defended her family’s foundation, which has been under fire for accepting donations from foreign governments—including some whose practices contravene the ethos of the philanthropic organization.

“I am very proud of the work the foundation does,” Clinton said, skirting the substance of the question. “I’m very proud of the hundreds of thousands of people who support the work of the foundation and the results that have been achieved for people here at home and around the world. And I think that we are very clear about where we stand, certainly where I stand, on all of these issues.”

Clinton also criticized a letter signed by 47 Republican Senators sent to the Iranian government warning that a nuclear agreement reached with Obama may not be binding on the next administration. “Either these senators were trying to be helpful to the Iranians or harmful to the commander-in-chief in the midst of high-stakes international diplomacy,” Clinton said. “Either answer does discredit to the letter’s signatories.” 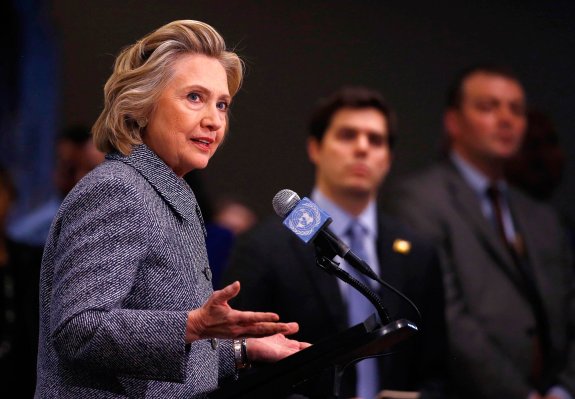