Everything We Know About The Bachelorette's Big Twist

Last night it was announced that the popular ABC reality show couldn’t choose just one woman to escort on their journey to love, so instead the show is shaking things up—the next season will star both Britt Nilsson and Kaitlyn Bristowe, who were winnowed from the herd of women looking for love with Chris Soules on the most recent season of The Bachelor.

One of the longest running tropes in The Bachelor‘s history is for host Chris Harrison to dolefully intone that there will be “a dramatic twist” that is “unlike anything in Bachelor history” and will have “everyone talking.” Usually this speech precedes a particularly gruesome hissy fit or a contestant sneaking into the Bachelor’s suite for same late-night nookie (which is so unfair to the other 11 women he’s dating), or someone “shockingly” turning down a rose—but all of that is pretty typical turbulence for fans of the reality show. Last night, however, Harrison’s words actually had the ring of truth to them.

He announced that the producers of The Bachelor were evenly split between casting Britt or Kaitlyn as the new Bachelorette, and since the fan community seemed evenly divided as well, the show was going to try something new: They would cast both women.

Here’s what ABC’s press release had to say about the twist:

So here’s what we know: the show has cast both Kaitlyn and Britt, but, much like The Highlander, there can be only one Bachelorette. Last night, Chris Harrison said something along these lines: both women will arrive at the mansion for an opening night cocktail party and then the men will decide which woman continues on her journey to love. This is what happened way back in Season 6 when The Bachelor tried to boost its ratings with a similar twist. The show cast both Byron Velvick and Jay Overbye and 25 women chose between them by handing out roses to their preferred suitor during one of the show’s infamous cocktail parties. Byron earned the most roses and went on to be The Bachelor. It didn’t end well. Yet, the producers are trying it again.

On The Bachelor: After the Final Rose, when Harrison asked Kaitlyn for her take on the twist on The Bachelorette formula she admitted her first thought was: “Well, that’s not ideal.” America just might agree with that sentiment.

Right now it sounds like what has ostensibly been a woman-powered show, where an empowered woman chooses her own life partner, is now becoming a show where two women compete for male attention for sport. Does America want to watch Britt and Kaitlyn enter a Bachelor version of the Thunderdome where the men will decide who is showered with roses and who gets the thorns? Who knows! It doesn’t sound like ABC knows yet, either. Based on the vagueness of the press release, it seems like the network is trying to keep their options open, depending on how this twist will play out with fans. If fans are unhappy, maybe the show will decide to let both women stay and find their own paths to love on reality television—just like our fore-mothers dreamed.

The Bachelorette returns to ABC, on Monday, May 18.

Read next: The Bachelor Explains His Big Decision 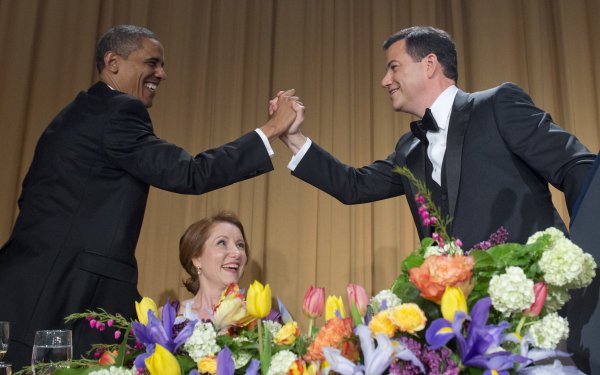 President Obama Will Appear on Jimmy Kimmel Live!
Next Up: Editor's Pick