Tonight on the Bachelor finale, Chris Soules, America’s very own Fresh Prince of Farming, engages in a little animal husbandry on himself. The gentleman farmer’s journey to find love draws to a close, and tonight he makes his decision between Chicago-based fertility nurse Whitney and the San Diego–based chiropractic assistant Becca. Will he choose the woman who loves him (Whitney) or the woman who might some day love him, but she isn’t exactly sure when (Becca)? Will the farmer take a wife? Or will the cheese stand alone? Let’s get to it.

Whitney Meets the Family: There’s little doubt that Whitney really, really likes Chris, so she really, really wants Chris’ family to like her. So when she goes to the farm she wears a plaid flannel shirt dress and does her best to blend in with the triumvirate of blonde sisters. During dinner, she gives a toast and manages to make herself cry — and then makes Chris’ dad cry. The sisters pull Whitney aside to grill her about giving up her life in Chicago to live in the micro-town of Arlington, Iowa. Whitney makes it clear that she is done making other people’s babies and wants to start making her own, which is good enough for the sisters. Then Whitney tells her possible future mother-in-law (PFMIL?) that Chris makes her feel like the “only woman,” which is pretty impressive considering that up until very recently he was dating a baker’s dozen of other women. Whitney tells her PFMIL that since her mother died, she has been waiting for someone to call mom. The PFMIL wisely tells Whitney she likes her fine, but it’s up to Chris. While Whitney has charmed the pants off of Chris’ family, Chris can’t help but talk up Becca. His brother-in-law points out that he probably likes the slight mystery that is Becca, because he took a psychology class in college and knows things.

Becca Meets the Family: Becca tells Chris’ family that she’s not in love yet, and she’s scared that Chris is going to dump her because Whitney wants to get married and have babies right now and she’s not sure. Chris thinks Becca is worth the risk, but the sisters are not impressed. Chris swears up and down that he and Becca have a special relationship, and he knows that she will fall in love with him eventually. The PFMIL grills Becca about the fact that she lives in California, and Becca shrugs that she’s not in love with him yet and isn’t ready to move to the middle of nowhere yet. Chris’ mom keeps optimistically trying to point out that Becca might be in love with him, but she’s like whatever. Chris’ dad opines that he thinks Whitney is the sure thing, but thinks Chris loves Becca.

Post-Family-Visit Scorecard: Becca isn’t in love with Chris yet, isn’t ready for a proposal, and is not sure she wants to live in Iowa. Whitney loves Chris, wants to marry him, wants to move to Iowa. While his choice Chris should be clear, it really isn’t.

Final Date with Becca: Chris goes to Becca’s hotel and tries to kiss her on the bed, but she pulls away to talk. They finally have The Talk. Chris wants to know if she has any interest in being part of his small town life, and while she swears she’s excited to be with him, but she can’t make any promises about when she would be willing to move to Iowa. She doesn’t know why she’s not in love with him. Chris looks brokenhearted as she lays out all her fears and concerns and won’t commit to anything. She finally admits that she is not that into Arlington. She says, “I’m not just gonna pick up my life and go anywhere for someone,” which is not a sentiment that has ever been uttered on this show, like, ever. They hug and try to pretend there aren’t cameras trained on them. Afterward, Chris has no choice but to go stand in a field and stare into the middle distance.

Final Date With Whitney: Whitney gets dropped off in Chris’ field (which is not a euphemism, but could be) and they go jump on a combine with his dad and harvest some corn. Whitney is so touched that he wanted to bring her here to see the harvest (but, seriously, it’s just free labor). Whitney does Emmy-worthy work pretending that she is thrilled to be on a tractor harvesting corn in the middle of winter. Then he takes Whitney to his house and says leading things like, “It’s made for a family!” and she wanders around redecorating with her eyes. They sit by the fire and try to figure out why Whitney is getting the loser edit on the show. Later, at Whitney’s hotel, they have cocktails and talk. Whitney loves small-town life (although does she know she probably can’t get her eyelashes done in Arlington?), she love Chris, and can’t wait to get married and have babies. No pressure. Chris says, “I reciprocate that.”

The Decision: As Chris mulls over his options, Neil Lane comes to glamorous Iowa to help Chris choose an engagement ring. As Chris’ disembodied voice floats over the image of a limousine cruising through frost-covered corn fields, Chris stands in a barn (which is set decorated into an inch of its life filled with hurricane lamps, decorative blankets, and flower arrangements on wrought iron pedestals) and waiting to make his decision. It should be noted that the barn is so cold that you can see his anxious breath circling his head.

First Out of the Limo: Becca steps out of the limo, wearing high heels and a long-sleeved burgundy velvet dress to the final Rose Ceremony. Chris tells her that he’s always liked her and tells her that he could see her as his wife. Then he makes the trademark Bachelor sigh. The one that means: I didn’t choose you. He tells her that she’s just not ready. He knows she will make some guy happy, but it’s not going to be him. Becca looks relieved, but probably mostly because that means she can go inside where it’s warm now and end this farce. He tucks her back into the limo and sends her off. She does her best to cry during the limo ride, but doesn’t. She claims she can’t process it and might be in shock, but also just kind of shrugs.

Second Arrival: Whitney pulls up in front of Chris’ family’s barn and Chris Harrison pats her on the back and wishes her good luck, presumably he’s talking about getting up the barn stairs in heels. Whitney looks elegant in black as she goes to tell Chris that she loves him and that she is so scared right now that he is going to dump her for a 26-year-old chiropractic assistant. Then Chris tells her that she is “perfect for him.” As he talks she anxiously studies his face, looking for a clue as to whether he will fall on his knee or send her out the door. Then he tells her that he loves her and gets down on one knee and asks her to marry him. She says yes and he slips a giant Neil Lane diamond ring on her finger. Then they sit in the barn and make out.

After the Final Rose: Chris Soules joins Chris Harrison for a little Chris Time in front of a live studio audience. He is excited to finally tell the world that he is engaged to Whitney and declares her the right person for him. Chris S. reveals that Whitney has only been watching their dates in order to spare herself any unnecessary heartache. Being a smart lady sure makes for boring reality television, though.

Facing the Ex: Before the happy couple can revel in finally going public, Chris must endure facing Becca. Normally facing The Shunned is a grueling ordeal that makes everyone uncomfortable. Becca, however, clearly doesn’t care. She is totally nonplussed, because despite Chris S.’s claim to “strong feelings” about Becca, Becca just wasn’t that into him. She basically high-fives him and is like, “we’re chill.”

The Happy Couple: Chris and Whitney finally reunite and out themselves as an engaged couple. Chris H. asks Chris S. what he likes about Whitney, and he basically says that since he can’t marry his sisters, he wants to marry someone as close to them as possible. Whitney doesn’t seem to think that’s off-putting or odd at all.

Surprise Guest: Jimmy Kimmel comes out to congratulate the happy couple — and congratulate himself for setting them up on their first one-on-one date. He brought them a wedding present, too: a cow named Juan Pablo. Chris H. leans over and says, “Ees O.K. Ees O.K.” to the poor cow, which was pretty much the best thing ever.

The Big Surprise: Chris H. finally reveals who the new Bachelorette will be. It’s not Britt. It’s not Kaitlyn. It’s both of them! Apparently they will both show up on the first night of The Bachelorette, and the 25 men will determine which of them will make better marriage material, which sounds completely bananas. The new season will definitely be one to watch. 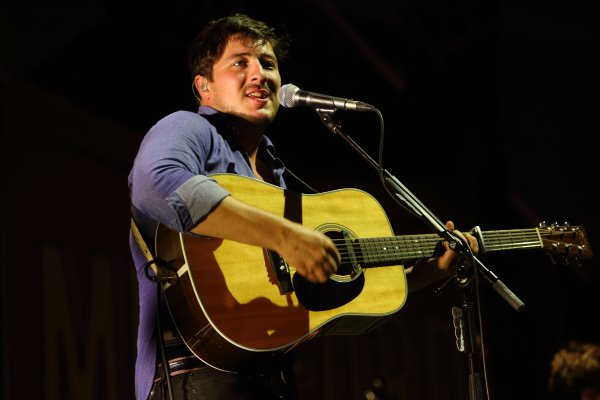