In The Divergent Series: Insurgent, hitting theaters March 20, Oscar-winner Kate Winslet returns as the villainous Jeanine Matthews. Picking up where the first adaptation of Veronica Roth’s hit young-adult series left off, Jeanine is hunting down Tris (Shailene Woodley) and Four (Theo James), two divergents — people who don’t fit perfectly into one of society’s five factions — who threaten her corrupt control of a dystopian Chicago. The 39-year-old actress spoke to TIME about playing a bad guy, the importance of young-adult fiction and which faction Rose from Titanic would choose.

TIME: You were drawn to the role of Jeanine because you had never been a villain before. What’s the best part about playing one?
Kate Winslet: The novelty of that was definitely the most thrilling, really, but also playing a character who could be many versions of nasty — there is lot that is sinister about her. That, as an actor, provided me with a platform to have a lot of fun and try lots of different things. To have that level of power over all those individuals, that was just a really exciting, new thing for me to play around with. And I could be a part of something that is a pleasure for so many people to watch. So many people are in anticipation of its release. It’s lovely to be apart of something like that.

You’ve called Jeanine the female Hitler — that’s a pretty intense label.
But you can see why! I watched Insurgent the other night, and I really sat there thinking to myself, “Oh my god, she is Hitler.” It is harsh, but it’s the truth. Her behavior is diabolical. It really is appalling. The only thing that saved me from disliking her as much as I did is that I know she never existed. Somehow that saved me. I was able to laugh. It’s what you have to do when you play somebody like that.

Is that different from when you played an actual Nazi in The Reader?
It’s an interesting thing, playing a character who didn’t exist versus playing a character who potentially could have existed. It’s very easy for me to judge and have a strong opinion about a character who is fake and will never exist. I can easily say to you, “Jeanine is a completely despicable, disgusting woman, and if I met her, I would trample her to the ground and pull her eyes out.” I can say that to you. But when one plays a character that either exists or potentially could have, I find myself feeling incredibly protective of those characters. I’m sure if you looked hard, you’d never find me saying anything disparaging about [The Reader character] Hanna Schmitz, although of course this storyline she occupies is not a very nice one. That’s something new I learned through playing a real villain in Jeanine versus an accidental villain, I suppose, in playing Hanna.

In recent years, young-adult franchises have landed a surprising number of accomplished actors: you in Divergent, Philip Seymour Hoffman in The Hunger Games, your new Insurgent co-stars Octavia Spencer and Naomi Watts. How do you explain these movies’ appeal?
I can’t speak for any of those other actors you mentioned, but for me, I’d say this is a great, quality piece of movie-making and screenwriting, and the novels themselves are spectacular to read. Both myself and Naomi have children, and when you’re a parent, watching something that their generation and their friends at school can enjoy as well is pretty thrilling. That definitely for me plays a big part in wanting to do something like this.

One can’t help but mention The Hunger Games in the same breath as a series like this one because there are so many comparisons one can draw because of the nature of these franchise pieces. But after the success of The Hunger Games and how entertaining that has been for my kids and their friends, it’s a really wonderful thing to be able to go provide them with more entertainment of that nature.

And I really did love these books. They’re very intelligent and cleverly written, very captivating for young readers. There’s a lot to be said for that. Harry Potter really harnessed the imagination of so many young-adult minds, and it’s the same with the Divergent series. As soon as the script came in and I read the first one, my children literally saw it on the kitchen table and said, “Oh my God, mom, wait a minute, that’s that book!” When you hear how much of a buzz there already is just because of how good the books are, that definitely makes you go, “Wow, gosh, I didn’t know anything about how exciting this is for young readers!” It’s not my readership, it’s not my age range, but to have something brought to your attention specifically by the 10-year-olds? That’s a big deal.

It’s a wonderful thing as an actor to be able to do that and to do something completely different. Since Titanic, I’ve been very fortunate to play diverse roles and worked with absolutely wonderful people, but the nature of the films I’ve been apart of have often been quirkier and smaller by choice. To be a part of something like this, it’s a whole new experience, and a very thrilling one.

You must be the coolest mom ever now.
100 percent. Seriously. They want me to get to school a little bit before pick-up time. They like it if I’m killing time in the playground.

You and Shailene Woodley don’t have as many fight scenes in this movie. Were you relieved, or do you miss the pretend combat?
You know, I do actually wish there had been more fighting with this one, only because when we were shooting Divergent I was actually pregnant and didn’t have a huge amount of physical strength. There was a lot, to be honest with you, that the stunt double did because of my condition! So although I wasn’t entirely back in my pre-baby shape, it would have been nice to have thrown a few punches in Shai’s direction! But I do prefer hugging her to hitting her.

At least you no longer have to spend every scene hiding the baby bump with Jeanine’s futuristic iPad.
You have no idea! That was one of the things I was excited about: We can wear the fantastic tight dresses that we had planned in the first one! We actually did completely redesign all of Jeanine’s wardrobe because I became pregnant. We had to re-costume me because the bump ended up getting rather large faster than we anticipated. It was fun to give her a slightly cooler, almost harsher look.

You’ve said before that what Shailene is experiencing now in her career is what you went through after Titanic. What advice do you give her?
I felt I was able to have a protective wing around her through Divergent. I was a safety net from afar. She hasn’t particularly needed me for the second one now because she herself will admit she learned a great deal through the experience of Divergent and the press attention that came after that. I wish I could have truly prepared her properly, but of course you can’t really, until you’re in those shoes. She definitely had to experience that for herself.

The one thing I would say is for both Shai and [her co-star] Theo [James], it’s been harder for them than it was for me. The simple reason is social media is what it is. It literally is a dominating beast, and we didn’t have that back then. And when I say back then, do you have any idea how long ago it really was? I’m turning 40 this year! Leo [DiCaprio] turned 40 last year! It’s a long time ago. Now, with the Internet, and the way social media works, it’s all so much faster and so much more intense. For these guys, there is literally no escape.

The way I coped with it is just by standing on my own two feet, focusing on the work, reminding myself that I do this job because I love it and not reading anything. Ignoring all the hype. To a certain extent, that’s what Shai has been doing because that’s her way anyway. And I will say this: She walked into the shooting of Divergent a very experienced young actress already, a very good young actress already. She is very secure and comfortable with who she is no matter what anyone tries to throw at her. All I can do is hug her and cheer her along from the sidelines.

Do you ever think about which factions your previous characters would choose, like, say, Rose from Titanic?
She would probably pick Erudite — yes, of course she would. What would Clementine in The Eternal Sunshine of the Spotless Mind do? She probably would have picked them all and dyed her hair a stripe of each faction: black on one side, white on one side, blue down the middle.

So you’re saying Clementine is divergent?
You’ve opened up a whole can of worms now. 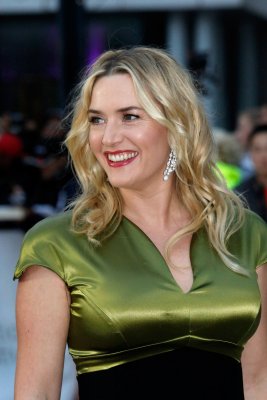 Kate Winslet on Losing Baby Weight: 'I'd Rather Be Well-Fed and Happy'
EDIT POST