President Barack Obama, first lady Michelle Obama, their daughters Malia and Sasha, as well as members of Congress and civil rights leaders make a symbolic walk across the Edmund Pettus Bridge in Selma, Ala. on March 7, 2015.
Jacquelyn Martin—AP
By Charlotte Alter / Selma, Ala.

Even Congress takes field trips. But a codel — short for congressional delegation — is either a wonky affair, with local officials lobbying for their pet projects, or a thinly disguised vacation.

The Congressional Pilgrimage to Selma to mark the 50th anniversary of “Bloody Sunday” was something else entirely. Sponsored by the Faith & Politics Institute, the bipartisan trip was less glamorous and more serious.

In a way, it was like an actual high school field trip, with lawmakers munching on Doritos while talking about one of the most brutal fights of the civil rights movement.

Starting from Montgomery on a chilly Saturday morning, a group of about 100 members of Congress plus dozens of other dignitaries boarded color-coded buses for the 54-mile drive to Selma. Sens. Tim Scott and Rob Portman were there along with fellow Republican House Majority Leader Kevin McCarthy, who joined the trip at the last minute. Democratic Sens. Elizabeth Warren and Claire McCaskill were there, along with House Minority Leader Nancy Pelosi.

We were headed for the Edmund Pettus bridge, where Rep. John Lewis and Rev. Martin Luther King Jr. marched for voting rights 50 years ago, and where President Obama was set to speak.

Like any long bus ride, people told stories. Democratic Rep. Jim Clyburn, who was active in the civil rights movement and met King several times, said that “people would be surprised at how good a listener King was,” given that he was known for his speechmaking. Despite his gravitas, King had a “tremendous” sense of humor, and loved to play jokes, he said.

Clyburn also drew a connection between the fights of yesterday and today. He said he was disturbed by revelations of institutional racism in a report from the Department of Justice on the police force in Ferguson, Mo. “When you read Eric Holder’s report, you feel like you’re in some other country,” he said. “This cannot be the United States of America.”

When we arrived in Selma, the lawmakers were herded off the bus towards the Edmund Pettus Bridge, where Obama would speak. They could be easily identified by their flowered lei, a gift from Democratic Rep. Mark Takai of Hawaii to remind them of the lei King wore in Selma as a symbol of Asian-American support for the civil rights movement.

Sweating in the sun as they waited for the President to appear, members of Congress passed the time like everyone else by taking selfies, standing on chairs to get a better view and getting friendly over apple juice and lemonade. They also chatted with some of the dignitaries who had witnessed history.

Luci Baines Johnson, daughter of President Lyndon B. Johnson, recalled being with her father on the day he signed the Voting Rights Act in 1965. Then 18, she recalls being on “Daddy duty” that day, and noted that her father called her by her middle name, which he rarely did. “He said, ‘Luci Baines, we are going to Congress today,” she recalled, “and there are going to be many brave and extraordinary men and women there.”

Fanning themselves with programs, the lawmakers and activists all rose from their seats when the presidential motorcade came across the Edmund Pettus Bridge– some held up their phones to take photos.

Obama’s speech was a return to form, full of rhetorical flourishes and light on policy discussions. “We respect the past, but we don’t pine for it,” he said. “We don’t fear the future; we grab for it. America is not some fragile thing; we are large, in the words of Whitman, containing multitudes.”

After Obama spoke, many lawmakers felt that they had just witnessed a little more history. Democratic Rep. Steny Hoyer (D-MD) said the Selma speech was the “best of his presidency” and Pelosi called it “his greatest speech.”

The speech, Pelosi said later, represented “a coming together to renew a commitment to nonviolent change.”

“We all want to find our common ground,” she said over vanilla ice cream with chocolate sauce.

Ushered back onto the buses,the lawmakers were subdued, exhausted from the heat and the haul. Our bus leader suggested we take two bus selfies: one serious, one silly. The group ate more Doritos and watched a documentary about the civil rights movement. All the while, driving back along the road between Selma and Montgomery where King had once walked. 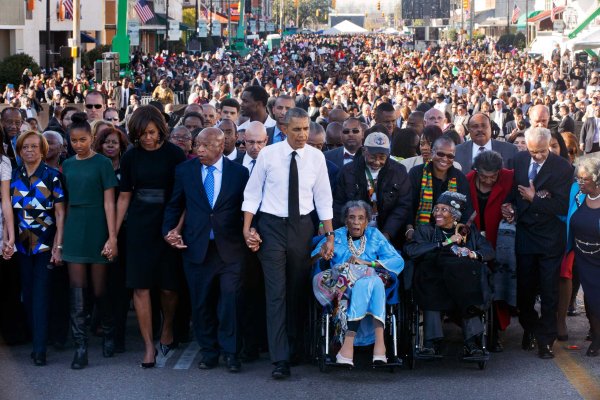