How the Arab Spring Exposed the Limits of American Power

When it comes to Revolutions, timing may be everything. The Middle East has now endured four years of uprisings with no peaceful end in sight, in part because it had the historical misfortune of entering a revolutionary moment at the same time that the U.S. — and the wider Western world — was marked by its own profound period of political and economic dysfunction.

This isn’t just a historical lesson. As Congress debates whether to give President Obama a new AUMF (Authorization for Use of Military Force), and as the 2016 presidential hopefuls propose their solutions to America’s foreign policy challenges, we need to determine what needs to be done differently, now that our economy is on a growth path, even if our politics remain dysfunctional.

When long-time dictator Zine El Abidine Ben Ali fled Tunis on January 14, 2011, the United States was in its ninth year of post-9/11 warfare. The country was still slogging through the Great Recession. Having elected a President who pledged to draw down the conflicts in Iraq and Afghanistan and focus on “nation-building at home,” the American public had little appetite for renewed engagement in the Middle East. The Obama Administration, moreover, had emphasized the need to “pivot” to the country’s long-term strategic and economic interests in the Pacific.

As uprisings spread in quick succession — to Egypt, Bahrain, Yemen, Libya, Syria, and beyond — Washington was also in its first months of divided government. A new Republican majority in the House promised to constrain the powers and purse of the Obama Presidency.

Foreign assistance, while only comprising approximately one percent of the federal budget, was an appealing target. Meanwhile, the machinery of American foreign policy — the Pentagon, the State Department, USAID, etc. — had long since become ossified by bureaucratic decay. Strategic thinking and implementation was overly reliant on the military, inflexible, and ill-prepared for such a massive upheaval.

Read more: Here is the power of American angst.

Europe was likewise occupied by economic crisis. While the Middle East simmered, Greece, Portugal, Cyprus, and Ireland needed urgent assistance. The wider Eurozone teetered at the economic abyss, as Brussels and Berlin struggled to cope with the fallout. Japan, meanwhile, was soon consumed by the triple disaster— earthquake, tsunami, and nuclear crisis— of April 11, 2011.

In this context, the G8’s initial response to the Arab Spring— the Deauville Partnership announced at their summit in France in May 2011— unfortunately ended up becoming as much an exercise in obscuring the G8’s collective lack of resources for the “transitioning countries” than the outpouring of support that it was branded as and hoped for.

Yet, the G8’s response was merely another manifestation of a wider crisis of confidence in the West, and indeed, in the entire international system: Were the BRICs on the verge of becoming the world’s dominant economic bloc? Was the Chinese model of authoritarian capitalism more capable of growth and immune to downturns? Or were these emerging economies themselves waiting for their own crises?

As the Arab Spring erupted, there was accordingly no obvious model for the region to follow— and there were severe constraints on the ability of Washington and the West to influence its course.

Four years later, we see the results: The Arab Spring to date has been a quagmire of epic proportions— or more accurately stated, a series of epic quagmires. To be sure, even if the U.S. government had the “perfect” policies, its ability to influence the outcome would have been limited. The dominant causes and course of events have been set by conditions in the region: autocratic governments that failed to provide a modicum of freedom or opportunity for their citizens; the growing divide between Islamists and traditional authoritarian regimes; the sectarian divide between Sunni and Shia; and the region’s failing economic, educational, and social systems— embodied foremost in the systematic marginalization of women, young people, and minorities.

Had the Arab Spring occurred in a different period, the U.S. government might have been in a better position to assist— as it did with the Marshall Plan following the Second World War or the SEED Act following 1989. The Mideast, similarly, may have seen the West as more of a magnet— perhaps akin to post-Cold War Latin America, where distrust of the West lingered even the region increasingly adopted western norms.

Read more: Will the radical center save the United States?

From the perspective of the Middle East, the western political model has instead seemed weak while the eastern model has remained distant. The Islamist model has been discredited— just as the secular authoritarian model before it. The region has splintered. Violence has surged. And the underlying challenges— the widespread lack of human dignity, political freedom, and economic growth— remain.

Can the region now be turned around?

In some ways, the ingredients for sustainable change remain. A new generation—more than half of the Arab world is under the age of 25— is both awakened to the region’s challenges and connected to the wider world in ways not seen, perhaps, since the apex of Arab civilization. Across the region, the Arab Spring brought to the fore a series of challenges that, while unresolved, are now firmly on the agenda in many countries.

While the region must rightly retain control over its own fate, there is more that the Washington can do to help – and more that it must learn from recent mistakes as it ramps up its war against ISIS.

In the initial stages of the Arab Spring, the Obama Administration was rightly respectful of the fact that change was being driven from the region. But President Obama has too often appeared overly cautious or indecisive. Congress is also blameworthy for repeatedly displaying a penny wise, pound-foolish and needlessly partisan approach to foreign policy.

American economic strategy in the aftermath of the Arab Spring serves as a cautionary tale.

The United States initially sought to help stabilize countries like Egypt, Jordan, and Tunisia through increased economic aid. This came in response to calls from the countries themselves; Egypt, in particular, called for debt forgiveness. In a highly resource-constrained environment, the Obama Administration attempted to meet these requests. But Congress endlessly delayed— long before Islamist parties came to power— even when it involved only the reallocation of existing funds.

Meanwhile, we relied on funding from others, like the Gulf States, each of whom had their own interests. And so conditions on the ground deteriorated, American credibility weakened, and the moment was lost.

Of course, U.S. taxpayers cannot possibly cover the cost of global crises alone. But when it comes to diplomacy, there is a basic truth: without our own resources on the table, our influence diminishes.

In today’s Washington, there is often money for military action. But advancing American interests through aid (once an accepted, bipartisan strategy) has become an “affront” to fiscal responsibility— even if it is often far more cost-effective than putting boots on the ground.

America’s military might, meanwhile, has proven difficult to utilize in a sustained manner. In Libya, the American-led air campaign against Qaddafi was successful. Ensuring stability has proved far more difficult. Libya has turned into an example of the powerlessness of American power; our military can only go so far in addressing another nation’s underlying challenges.

Syria, now an ISIS stronghold, has become the perfect storm of the Arab Spring— combining (and indeed exceeding) the worst aspects of each uprising: the kleptocracy of Egypt, the sectarianism of Bahrain, the chaos of Libya, the poverty of Yemen, all rolled into a brutal proxy war involving major regional and global powers.

Its fate, likewise, is a microcosm of the Mideast’s troubles. When Syria eventually emerges from its nightmare— a prospect for which there is no obvious path— the country will face a vast array of challenges: establishing security and a functioning government; ending sectarian warfare; rebuilding the country’s infrastructure; and addressing the underlying crises that caused the revolution in the first place. In short, Syria needs to rebuild a functioning state and society almost from scratch. This will be a long, difficult, and Syrian-led process. But it’s essential that the U.S. remain engaged to safeguard its interests.

Yet American policy on Syria remains predominantly disengaged, perhaps understandably so. Syria is a problem from hell. President Obama’s choice to keep it at arms length has been a reasonable strategic choice. The U.S., moreover, has done its best to mitigate the refugee crisis and support various attempts at a diplomatic solution. It also achieved a victory in the elimination of chemical weapon stockpiles held by the Assad regime.

Nevertheless, the cumulative effect of reasonable reluctance in Syria— as across so much of the region— has appeared more as lack of strategy than strategic choice.

While the U.S. government will never alone be able to solve the problems of the Middle East, in a region where both American credibility— and the entire democratic model— is increasingly questioned, our policies must demonstrate renewed competence and coherence.

You can’t ask for a do-over when it comes to global events, but you can build toward a reset by taking firm and confident steps, such as the new Defense Secretary Ash Carter’s move to convene a hands-on strategy session on the war against ISIS.

More importantly, as Congress debates the Authorization for Use of Military Force against ISIS, it must use this opportunity to work with the Administration in Syria and beyond. It’s time to expand our strategy in the entire Mideast to all facets of our national power: military, diplomatic, economic, and inspirational. It’s time to turn a reactive series of tactics into a strategy that flows from our renewed strength as a superpower.

Ari Ratner is a fellow at New America. From 2009-2012, he served as an appointee at the State Department. Follow him on Twitter at @amratner. An earlier version of this piece was originally published on the Project for Study of the 21st Century blog PS21 MIDEAST. This version was published in New America’s digital magazine, The Weekly Wonk. Sign up to get that delivered to your inbox each Thursday here, and follow @New America on Twitter 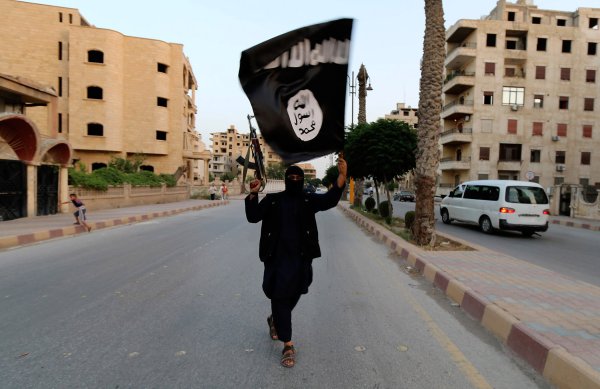 The U.S. Needs to Rethink Its Anti-ISIS Approach in Syria
Next Up: Editor's Pick