U.S. President Barack Obama speaks during an exclusive interview with Reuters in the Library of the White House in Washington on March 2, 2015.
Kevin Lamarque—Reuters
By Maya Rhodan

President Obama said Friday that the work begun by civil rights activists in Selma, Alabama fifty years ago is still not complete, as he prepares to visit the town this weekend on the anniversary of the historic march.

“This is an unfinished project,” the President said in an interview on the Tom Joyner Morning Show on Friday. “I say to my daughters the same thing I say to the young people who work for me, and that is it is a glorious task that we are given to continually try to improve this great country of ours.”

The President cited the the Department of Justice’s scathing report on the Ferguson, Missouri Police Department released this week as evidence that the country still had work to do on civil rights for black Americans. In the report, patterns of racial bias and unfair treatment of black residents was brought to light in the wake of the shooting death of unarmed teenager Michael Brown by a white police officer.

“There is, you know, work to be done right now,” Obama said.

The President gave the interview as the First Family prepares to travel to Selma to commemorate the half-century anniversary of the historic march that helped push lawmakers to pass the Voting Rights Act of 1965. The anniversary is being met with much fanfare: the President will speak on Saturday and lead a march on the Edmund Pettus bridge. Luminaries and politicians, including former President George W. Bush and former First Lady Laura Bush, will be in attendance.

In his Saturday speech, the President is likely to discuss Ferguson and the lingering battle to protect voting rights in the wake of the Supreme Court decision that struck down a part of the very act that will be celebrated. He’ll note the work of Congressman John Lewis, who was a student organizer and on the front lines on March 7, 1965, also known as Bloody Sunday. Yet, the President said Friday the great thing about Selma is “it celebrates all those folks who don’t have their name on a plaque or a statue.”

“It wasn’t just Dr. King making a great speech, although I think he is an icon for the ages. It wasn’t just John Lewis, although I don’t know of a more courageous or a sweet man than him,” Obama said. “But it was also just people who went back to their lives after it was done.”

And though the President said he talks to his daughters about what work needs to be done to improve the U.S., he doesn’t think they’ll take the same route he took to get it done.

“I am very doubtful that they will want to run for public office, you know,” said Obama. “Partly because they’ve been listening to their mother.” 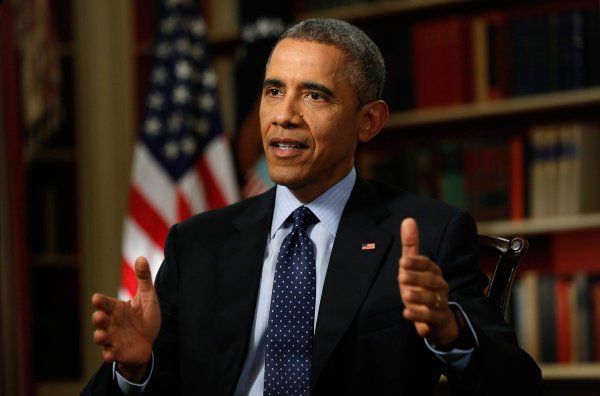 President Defends No Obamacare Backup Plan
Next Up: Editor's Pick