The past year has been a terrible one for Malaysia Airlines. On March 8, 2014, Flight 370 from Kuala Lumpur bound for the Chinese capital, Beijing, lost contact with air-traffic controllers less than an hour after takeoff, and vanished from radar screens shortly thereafter.

What followed was an unprecedented multinational search across over a million square miles that cost tens of millions of dollars in what has turned out to be one of the biggest aviation mysteries of all time.

Then in mid-July, disaster hit Malaysia Airlines again when MH17 went down over Ukraine. This time, the cause of the aircraft’s disappearance from the sky seemed clearer — a surface-to-air missile allegedly fired by pro-Russian rebels engaged in a battle with Ukrainian forces.

Many would argue that the Malaysian carrier was simply unfortunate to have lost a second plane in just over four months, especially since more than 30 other airlines had continued to fly over eastern Ukraine despite the violent conflict raging there (and a warning from the International Civil Aviation Organization). However, the disaster only exacerbated the loss of goodwill that Malaysia Airlines was already facing, especially given the lack of evidence on the whereabouts of MH370.

One year later, those whereabouts are still just as shrouded in mystery. The embattled airline is doing everything it can — including a $1.7 billion overhaul that involves laying off 30% of its staff — to salvage revenues as well as reputation. The Malaysian government assumed total ownership last year and aims to make the firm profitable by 2017.

“Before some of these accidents, airline safety was not top of the minds of most passengers, because it’s taken for granted,” Bennett Yim Chi-kin, a marketing professor at the University of Hong Kong, tells TIME, adding that disasters like these tend to impact the entire industry. “The factor of safety is now back to being a high criterion when selecting an airline.”

Yim says salvaging Malaysia Airlines’ brand equity will take some time. Losses of $368 million in the first three quarters of last year, as well as marketing slipups like a marketing tweet asking “Want to go somewhere but don’t know where?” and a promotion quizzing travelers about their “bucket lists” have already made the turnaround an uphill battle.

Enter Christoph Mueller, a man described by industry experts as a “battle-hardened veteran.” Mueller assumed his position as CEO of Malaysia Airlines last Sunday, one week before the anniversary of the MH370 disappearance and one day before the airline’s owners — state-owned investment fund Khazanah Nasional — announced a plan to ax 6,000 of its 20,000 employees. Mueller is an old hand in the airline industry fresh off a successful restructuring of Ireland’s struggling national carrier Aer Lingus. But reviving Malaysia Airlines will be a far bigger challenge, and the 52-year-old’s new job is one that few people in the industry would relish.

“I would say it probably is among the toughest,” John Strickland of JLS Consulting told AP, but added that Mueller’s position as an outsider — the first foreigner at the airline’s helm — could prove advantageous.

Malaysia’s tourism numbers have gone up in spite of (and some even argue owing to the raised national profile generated by) the two disasters, with a 10% bump resulting in some 22.9 million foreign arrivals until October last year. However, the airline also faces increasing competition from several low-cost airlines, including Malaysian private carrier AirAsia.

AirAsia experienced its own disaster on Dec. 28, when Flight QZ8501, run by its Indonesian affiliate, crashed into the Java Sea, killing all 162 people on board. The aircraft, traveling from the Indonesian city of Surabaya to Singapore, was retrieved from the water piece by piece over the next two months. The final remnant of fuselage was recovered last Saturday, Agence France-Presse reported, and 103 bodies have been salvaged so far. F.H. Bambang Soelistyo, the leader of the Indonesian search effort, said in a press conference that family members of the victims would be consulted before setting a final date for the search effort.

AirAsia’s reputation has not taken as much of a hit as that of Malaysia Airlines, largely because of the efforts of its dynamic and savvy CEO Tony Fernandes. Fernandes rushed to the front lines of the disaster almost immediately, and continued providing updates and messages of sympathy to his sizeable social-media following, in what many say has set the benchmark for how industry leaders should respond to a crisis.

By comparison, Malaysia Airlines’ honchos appeared flip-flopping and rudderless, with families callously told their loved ones were lost via SMS, or learning the latest developments via journalists’ questions.

“The No. 1 thing is you have to be fast, you need a very quick response,” Yim says. “Being honest, being sincere about your response also is very important.”

Many say comparing the two airlines is unfair, considering the vastly different natures of their respective disasters. Certainly, though, reputations must be earned, and for Malaysia Airlines and its new CEO, the most effective method of disaster management moving forward will be avoiding them in the first place. 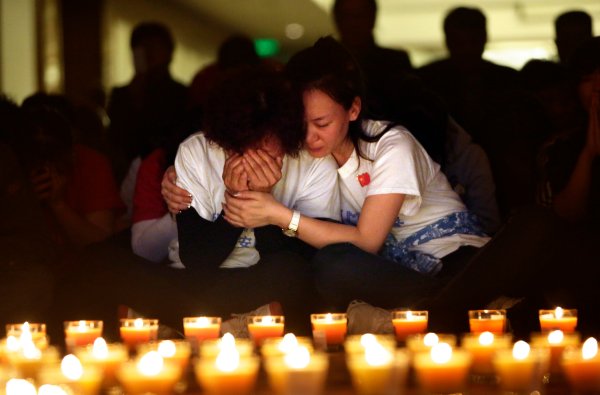 Fading Hope and Little Help for Families of Flight 370 Passengers
Next Up: Editor's Pick