A passenger on the Delta flight that skidded off the runway upon its landing at a snowy LaGuardia Airport in New York City on Thursday says he “thought about Sully Sullenberger” as the out-of-control plane veered toward Flushing Bay.

Robert “Bo”Cramer, 26, was on Delta Flight 1086 traveling from Atlanta to LaGuardia Airport. “You could tell visibility was bad coming in,” he said, “but you could see the runway and the river.”

“It felt like a hard landing, like the brakes were released,” he said. Passengers shrieked as the airplane skidded off the runway and toward the water of Flushing Bay, the Merrill Lynch adviser added, reminding him of the U.S. Airways plane crash in January 2009 when Captain Chesley “Sully” Sullenberger crash landed the jet in the Hudson River. “As we got closer to the water, it looked like we were going into the water… I thought about Sully Sulzberger.”

But once the wing hit the embankment and the fence, he continued, “you could tell we were slowing down.” The plane came to a halt just feet away from the water surrounding the runway.

The Delta staff did a “good job” of ushering passengers off the plane in the immediate aftermath of the accident, Cramer said. “There was a while when they were trying to figure out what happened as well… It felt like a very long time, but it was over before you knew it.”

At least six people were injured when the Delta jet left the runway upon its arrival to LaGuardia airport. The runways have been shut down until at least 6pm Thursday afternoon. 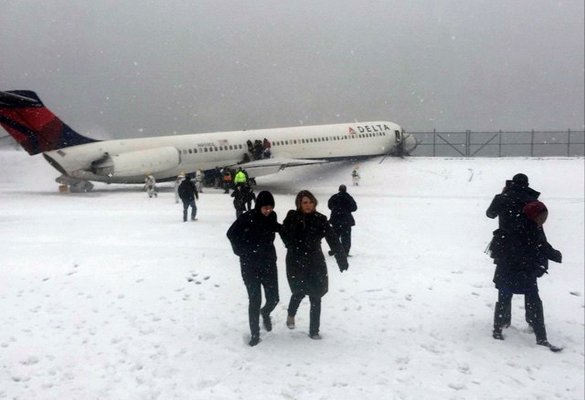 LaGuardia Reopens After Scare
Next Up: Editor's Pick