The Descendants Writer Kaui Hart Hemmings: I Could Work With Shailene Woodley for the Rest of My Life

Kaui Hart Hemmings is well known for her bestselling novel The Descendants, which was adapted into an Oscar-winning film in 2011. While George Clooney shined as the lead and narrator, it was Shailene Woodley who rose to fame from her role as Alex, an angst-filled teenager whose performance — including a memorable scene where she cried underwater — earned her a Golden Globe nomination. But Hemmings, who has always loved writing from the teenage perspective, is publishing her next novel Juniors under the young adult genre in September.

TIME talked to Hemmings about her new foray with teen literature, working with Woodley and recent comments about YA from Jonathan Franzen.

TIME: Why did you decide to write YA?

Kaui Hart Hemmings: I wrote a book of stories called House of Thieves and the bulk of it was told from teenagers’ [points of view.] Even now I consider it YA, even though it wasn’t sold that way. I just wanted to get back into that world of the teenage mind — everything is so immediate and there’s so much living in the present. I didn’t sit down and say, “I’m going to write it as a young adult.” I just wrote what felt true.

Did seeing Shailene Woodley’s character in The Descendants inspire you in any way?

It really did. It was so lovely to see on screen, because you can switch it to that character’s point of view. I couldn’t think of an actress who could have done it any better. She wasn’t a star back then, and it’s exciting that that’s where it started.

Could you see her playing the main character in this new book?

I could totally see her playing Lea, especially because Lea has some Hawaiian blood. And Shai is like a Hawaiian to me — she’s like a local. I think a little bit of Hawaii left with her, so I could definitely see her playing this character if she’s not too young. But someone like her who has that ability to act naturally, so you don’t feel like they’re acting at all. I wish Shailene would be in the movie version. I could work with her for the rest of my life — she’s incredible.

What will Juniors be about?

It’s about Lea, a junior in high school who is transferring from her San Francisco school to a huge private school on Oahu. She’s not only moving to a new school or a new place — she’s also moving because her mom got a part in a show sort of similar to Hawaii Five-0. So in addition to moving schools, circumstances have made it so that she and her mother are going to be moving into a cottage of very wealthy residents. The rest of the book sort of delves into female friendships, and [Lea] trying to find her identity in this new place.

What are some recent YA books you’ve liked that have inspired you?

I loved Belzhar by Meg Wolitzer. I loved We Were Liars — that was wonderfully done. I thought Meg Abbot’s The Fever was wonderful.

I think adults will definitely like it, because the children are also seeing the adults — they’re watching their behaviors, they’re trying to figure out ways not to be them and figuring out what life has in store for them. That will be something [adults] recognize — the differences between the friendships they had when they were young and the way friendships are or can be now.

Jonathan Franzen recently made some controversial comments about YA. What do you think of how it’s been looked down upon as a genre?

Jonathan Franzen seems like the grumpiest guy and he doesn’t seem to like much of anything, so I really don’t care what he has to say. It’s useless to criticize things that people love and something that speaks to them. What’s great about teen fiction is that it’s all mixed up — there’s highbrow and lowbrow! 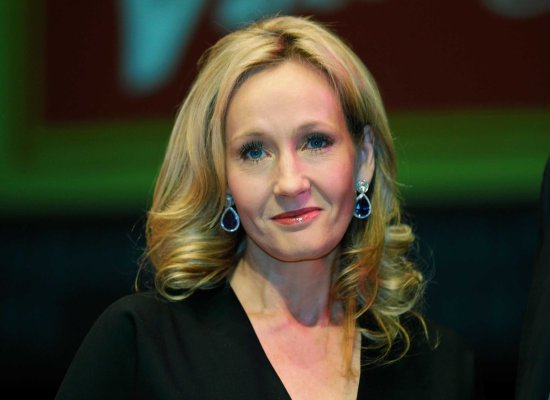 J.K. Rowling Tweeted the Gryffindor Puppy of Your Dreams
Next Up: Editor's Pick