“If Daesh is a big threat in Iraq, another threat is Shi’ite militias,” Davutoglu told TIME in a Wednesday interview, referring to the Islamic State in Iraq and Greater Syria by its Arabic initials. “This is very important. If Daesh evacuates Tikrit or Mosul and if Shi’ite militias come in, then there will be sectarian war. Therefore all these cities, Sunni populated areas, should be liberated by the inhabitants of those cities.”

Davutoglu’s warning raises the question of whether Iraq’s leadership has changed as much as U.S. officials hope. ISIS swept up the city of Fallujah last spring, and Mosul, Tikrit and other Sunni regions in June, in part by offering itself as protector of a minority Sunni population that had been excluded and even persecuted by the central government in Baghdad, which is dominated by autocrats who have overtly favored the country’s Shi’ite majority. Iraq’s corrupt and poorly led military, also dominated by Shi’ites, fled the battlefield en masse as ISIS advanced last summer, while many Sunni tribes essentially welcomed ISIS. The first major stand government troops made was at Samarra, home of a major religious shrine revered by Shi’ites.

The offensive on Tikrit, which began just days ago, is the first major counterattack aimed at ISIS, and observers are concerned that two-thirds of the force of 30,000 attackers are Shi’ite militia. They are backed by Iranian warplanes, artillery, rockets and advisors, including Revolutionary Guards Quds Force commander Qassem Suleimani, who was photographed near the front line on Wednesday, drinking tea with beaming members of the Badr Brigades—a militia trained and equipped by Iran. “This is the most overt conduct of Iranian support, in the form of artillery and other things,” Joint Chiefs of Staff chair General Dempsey, told a Senate committee on Tuesday, noting that U.S. warplanes are playing no role in the Tikrit assault. “Frankly, it will only be a problem if it results in sectarianism.”

It’s a big if. Turkey’s Davutoglu notes there is scant evidence of the local Sunnis who are supposedly being trained for a later assault on Mosul, the Iraqi government having promoted legislation that allows Sunnis to form “national guard” units that amount to militias of their own. “[The Sunni guards] should have a role,” the Turkish premier said. “In Iraq the government passed a new law forming national guards. But unfortunately now Shiite militias form national guards, while Sunnis in Anbar or in Tikrit and in Mosul, they were not allowed to. For us, Sunnis and Shiites are our brothers, we don’t make any difference. But we don’t want to see another wave of sectarian war.”

Davutoglu said he voiced the warning to Iraqi prime minister Haider al-Abadi in a conversation 10 days earlier. Al-Abadi has cast himself as a more moderate and inclusive Shi’ite leader than the highly sectarian premier he replaced, Nour al-Maliki. But the country remains sharply divided on ethnic and sectarian lines: Kurds in the north, Sunnis in the west, and Shi’ites everywhere else. The danger is of a wholesale sectarian blood-letting like the civil war that left tens of thousands dead in 2006 and 2007, when U.S. troops were still in the country. ISIS, with its extremist Sunni orientation, is both a product and an agent of the strife, having slaughtered thousands of Shi’ites during its summer blitzkrieg, including more than 1,000 recruits at a military base outside Tikrit in June. The men were lined up, made to lie in freshly dug trenches, and executed on camera.

Human rights group warn that Shi’ite militias are already exacting revenge, burning down buildings and carrying out extrajudicial killings in Sunni areas taken back from ISIS. “The day of judgment is coming,” Badr Brigades commander Hadi al-Ameri (who was transport minister under al-Maliki) warned residents of the Diyala Province town of Muqdadiyaa on Dec. 29. “We will attack the area until nothing is left. Is my message clear?” Clear enough. The question is whether anyone beyond Iraq was listening. 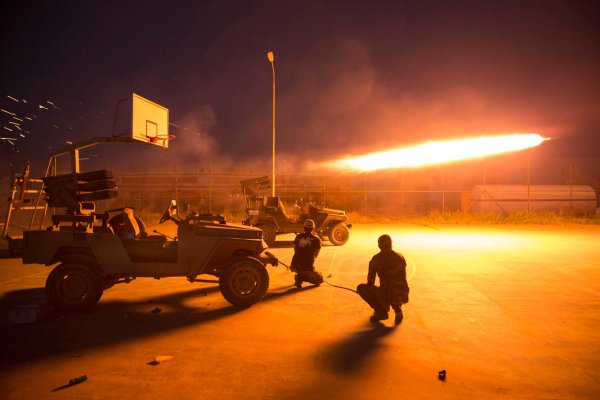 ISIS Set Fire to Oil Fields Near Tikrit
Next Up: Editor's Pick