One Hour of Sleep Makes a Difference In What You'll Eat

Plenty of studies have documented that teens don’t get enough sleep. They’re supposed to be in bed for eight to nine hours a night, but most get seven or less. Now the latest sleep research, presented at the American Heart Association EPI/Lifestyle 2015 meeting, shows when it comes to weight gain—which has been tied to sleep deprivation and disturbances—it’s not necessarily the amount of sleep that tips the scales but rather the consistency of that nightly rest.

Fan He, an epidemiologist at Penn State University College of Medicine, and his colleagues found a strong correlation between the variation in sleep patterns among a group of teens and the amount of calories they consumed. And for every hour difference in sleep on a night-to-night basis over a week, for example, they ate 210 more calories—most of it in fat and carbohydrates. Those with uneven sleep patterns were also more likely to snack.

Previous studies have linked poor or disrupted sleep to obesity; people not getting enough shut-eye, for example, may experience changes in the hormones that regulate appetite and how well they break down glucose in their diet. Levels of the hormone leptin, for instance, drop in those who are sleep deprived, and less leptin prompts the body to feel hungry.

MORE: The Power of Sleep

In the current study, however, all the teens got an average of seven hours a night, so it wasn’t as if some of the teens were sleeping for extremely long or short periods of time. Any metabolic changes they would have experienced due to their sleeping less than the recommended eight to nine hours would have been similar among the consistent and inconsistent sleepers.

Dr. Nathaniel Watson, president-elect of the American Academy of Sleep Medicine and co-director of the University of Washington Medicine Sleep Center, stresses that good quality sleep involves three things — getting enough sleep, making sure the timing of the sleep if appropriate, and avoiding sleep disorders. While the amount of sleep has gotten the lion’s share of attention in recent years, a new phenomenon called social jet lag, which the current study investigates, may deserve equal consideration. “We live in a society of yo-yo sleep in which people sleep less because of social or work demands, then try to catch up,” says Watson. “There haven’t been a lot of studies that looked at what kind of impact this has on our health, but teenagers may be particularly susceptible to social jet lag than older adults, and this study assessed that.”

MORE: This Is What’s Keeping Teens From Getting Enough Sleep

These results show that it was the variability in their sleep that was most strongly linked to their eating habits.

Why? The researchers guess that teens who aren’t sleeping consistently are more likely to get too little sleep on one night, for example, and therefore be more tired or sedentary the following day, which leads them to sit around and eat more. It may also be possible that teens with irregular sleep habits are more likely to stay up later on weekends; He found that these adolescents had a 100% higher chance of snacking on weekends compared to those who slept more regularly.

That suggests that health experts should focus not just on the amount of sleep teens are getting, but on their sleep patterns. “Instead of focusing on how much we sleep, we also need to pay attention to maintaining a regular sleep pattern,” says He. Such consistency, however, may not be so easy for teens to master. 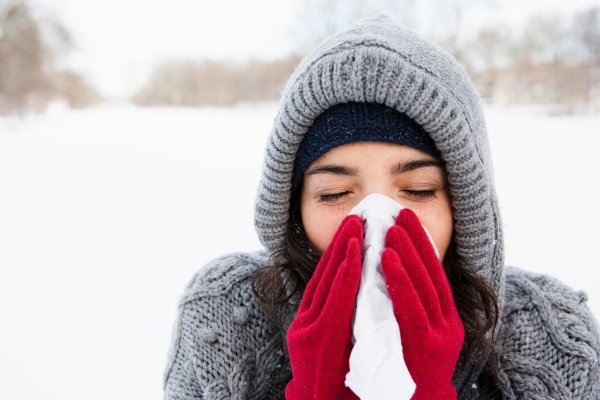 4 Things to Know About Zinc And Your Cold
Next Up: Editor's Pick