A suite of new studies puts a price tag on health problems linked to certain chemicals in our food, makeup and even couches—and it’s steep. The series of papers, just published in the Journal of Clinical Endocrinology and Metabolism, convened expert panels who reviewed laboratory and population-based evidence that certain endocrine-disrupting chemicals—including pesticides, bisphenol A (BPA) and phthalates, which are said to interfere with hormones in the human body—contribute to disease and disability. The cost in the European Union, they concluded, is likely €157 billion ($209 billion U.S.) per year, and may be as high as €270 billion ($359 billion) a year.

The scientists looked at 5% of known endocrine disruptors and estimated costs of exposure, including loss of economic productivity through disability and disease, in the European Union. They focused on three categories of health issues for which they felt the evidence was strongest: impacts on the developing brain and neurodevelopmental disabilities, obesity and diabetes, and male reproductive disabilities. Their estimates were approximately €157 billion per year—more than 1% of the European GDP, the researchers note.

MORE You Asked Is Perfume Safe?

Organophosphate pesticide exposure accounted for the biggest chunk of the cost, at €120 billion. Plastics, cans, phthalates and BPA came in second at €26 billion. Neurological health problems including ADHD were by far the most impactful, researchers concluded, at €132 billion per year.

“Our findings suggest potentially that endocrine-disrupting chemicals are replacing lead and methylmercury as leading contributors to neurodevelopmental disease and disability in children,” says Dr. Leonardo Trasande, lead author on the papers and associate professor of pediatrics and environmental medicine at New York University School of Medicine. By comparison, he says, the cost of lead exposure in Europe is roughly €50 billion.

Trasande adds that the cost estimates would likely be similar in the United States, though because of U.S. efforts like the Food Quality Protection Act to lessen pesticide exposure, pesticide-related costs would probably be lower.

There are proven ways to lower your exposure to the major endocrine-disrupting chemicals, Trasande says, including eating organic to cut out organophosphate pesticides and not microwaving plastic to limit phthalates. But real change will need regulation reform, he says. “Except for the Food Quality Protection Act, the regulatory model in the United States assumes innocent until proven guilty, resulting in broad and widespread experimentation on humans with exposure to endocrine-disrupting chemicals,” he says. “We’re just trying to put information into the hands of decision makers, so that we can consciously and openly decide whether it’s appropriate to allow for a 50% probability that the use of a chemical may contribute to a condition and lead to billions of dollars of costs.” 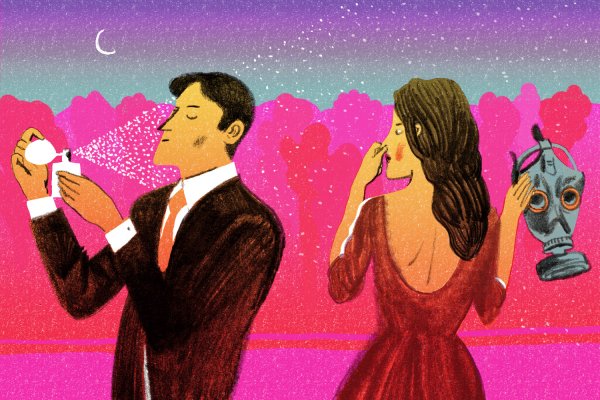 You Asked: Is Perfume Bad for Me?
Next Up: Editor's Pick