Australian death-row prisoners Andrew Chan, center, and Myuran Sukumaran, left, are seen in a holding cell waiting to attend a review hearing in the District Court of Denpasar, on the Indonesian island of Bali, on Oct. 8, 2010
Antara Photo Agency/Reuters
By Yenni Kwok

In the darkness of early morning hours Wednesday, Australians Andrew Chan and Myuran Sukumaran were woken by the Kerobokan prison guards in Bali. It took them 10 minutes to wash and dress for the transfer to Nusakambangan, the prison island in Central Java, where death-row prisoners are set to face the firing squads.

Chan and Sukumaran, sentenced to death in 2006 for drug trafficking, are among a group of 10 prisoners slated to be executed in Indonesia. Despite numerous and repeated pleas from across the globe to spare them — some of whom, like the two Australians, say they have reformed behind bars — Indonesian President Joko Widodo, popularly known as Jokowi, stands firm on his decision not to pardon drug convicts on death row.

On Thursday, Australian Foreign Minister Julie Bishop offered to swap three Indonesian prisoners held in Australia in a last-ditch attempt to save her compatriots. Although no official response has so far been received, Jokowi told al-Jazeera that the foreigners’ executions would at least not take place this week.

Many, including local rights activists, have criticized Jokowi’s blanket rejection of clemency and called on the 53-year-old carpenter’s son to consider each case on its own merits. Foreign leaders from Australian Prime Minister Tony Abbott to U.N. Secretary-General Ban Ki-moon, as well as musicians from Black Sabbath and Napalm Death (Jokowi is a big heavy-metal fan), have asked him to show mercy.

Jokowi announced in December that he wouldn’t give clemency to 64 prisoners on death row for drug-related crimes because Indonesia is in a state of “drug emergency.” He said 4.5 million people need rehabilitation and 18,000 people die every year because of illegal-drug use — a claim that, research analyst Claudia Stoicescu of Harm Reduction International points out, is based on “questionable statistics.”

Todung Mulya Lubis, lawyer for Chan and Sukumaran, questions the government’s decision to proceed with transferring the pair, known as the Bali Nine duo, to Nusakambangan while they are still waiting for the legal appeal process. “We still have hope, but we realize it’s only a miracle that can fulfill it,” Todung tells TIME. “They are now in Nusakambangan, and that means it’s just a matter of time [before the executions], likely to be days.”

Other drug convicts awaiting judicial reviews include a Filipina mother of two and a French citizen. Lawyers said Brazilian citizen Rodrigo Gularte should be exempted from the death penalty because he suffers from severe mental illness, but Indonesia’s Attorney General H.M. Prasetyo rejected this plea.

There are few public figures who openly criticize the death penalty in Indonesia, including Jakarta Governor Basuki T. Purnama, who was Jokowi’s deputy. Overall, however, Jokowi enjoys considerable public support for being “tough” on drug traffickers. On Dec. 24, weeks before six drug convicts were executed in January, he visited the headquarters of Nahdlatul Ulama and Muhammadiyah, the two biggest mass Islamic organizations in Indonesia, the world’s largest Muslim-majority nation, and received official blessing for his death-penalty policy.

Between 1999 and 2014, democratic Indonesia executed a total of 27 people, of whom seven were foreigners. In contrast, five of the six people executed on Jan. 18 were foreign citizens, and nine of the 10 set to be put to death this month are non-Indonesians. All of those executed or slated to be executed so far this year are drug convicts, while only seven of the 27 people executed in 1999 to 2014 were drug convicts. “With the focus on narcotics crimes, foreigners are likely to be executed,” says Dave McRae, senior research fellow at the University of Melbourne’s Asia Institute.

Under the presidency of Jokowi’s predecessor Susilo Bambang Yudhoyono, Indonesia didn’t carry out any executions from 2009 to 2012, or in 2014. As Yudhoyono pushed a policy to save Indonesian citizens on death row abroad, he gave clemency to drug convicts, including Schapelle Corby of Australia, a decision that stirred a firestorm of public hostility against foreign drug traffickers.

The Jokowi administration has announced 20 executions scheduled for this year — that doubles the existing record number in the post-Suharto-dictatorship Indonesia: in 2008, 10 prisoners were put to death, including the Bali bombers. “It is ironic,” Todung says, “that so many executions happen in democratic Indonesia.”

Notably, Jokowi’s hard-line stance jars with his repeated pledges to save the lives of Indonesians on death row abroad. On Feb. 27, Ajeng Yulia, a 21-year-old Indonesian, was sentenced to death in Malaysia for drug trafficking. Her case adds to the long list of Indonesian citizens facing execution outside their homeland — according to the Foreign Ministry’s count on Feb. 24, a total of 229 Indonesians have been sentenced to death overseas, including 131 for drugs cases. Jokowi, however, doesn’t appear to register the contradiction between vowing to save the lives of Indonesian citizens abroad while dismissing pleas from foreign governments on behalf of their citizens.

“We don’t have moral strength when we try to defend our migrant workers who are sentenced to death,” Todung says.

Instead, Indonesia has stepped up its nationalistic rhetoric. Jokowi shrugged off diplomatic repercussions from countries like Brazil, whose President refused to receive the Indonesian envoy’s credentials. “Don’t try to interfere,” Jokowi said Monday. “This is our legal sovereignty.” Armed-forces chief General Moeldoko dispatched four fighter jets to escort Chan and Sukumaran’s chartered plane en route to Nusakambangan. Says McRae: “This has become a political theater that Indonesian can stare down political pressure.” 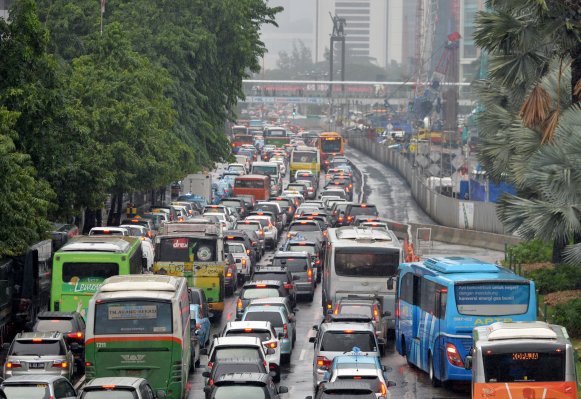 And You Thought Your Commute Was Bad?
Next Up: Editor's Pick