7 Things We Learned Writing a Cover Story About Jeb Bush

This week’s TIME cover story is a profile of Jeb Bush, the former Florida governor who is vying to become the third member of his family to win the presidency. Here are seven things we learned about Bush while reporting the piece:

His father met his future wife the day before his wedding: Jeb and Columba Bush dated for about three years before getting married in February of 1974 at a chapel on the University of Texas campus. George H.W. Bush did not meet his son’s bride until the night before the ceremony, during a dinner at an Austin restaurant called the Green Turtle.

He wasn’t the only one to find love in Mexico: Jeb Bush famously met his future wife on a school program in Leon, Mexico, while he was a student at Phillips Academy. But he was not the only Andover student to find love there. His buddy John Schmitz found a foreign girlfriend first: Columba’s sister. The pair are also married and living in the Miami area.

His business resume is interesting: Bush made millions in South Florida real estate in the 1980s and ‘90s, but he also dabbled in a broad variety of other ventures, from a corporate directorship with a secretive Swiss bank to a deal selling water pumps in Nigeria. Like his brother George, he briefly held a (tiny) ownership stake in a pro sports franchise, the NFL’s Jacksonville Jaguars.

He’s a tennis ace: Bush has a competitive streak in politics that spills over into sports. In 1989, Jeb and his younger brother Marvin even beat top female pros Chris Evert and Pam Shriver in a three-set doubles match on a private tennis court in the Hart Senate building in Washington.

He was the original “severe” conservative: Move over, Mitt Romney. While campaigning for governor of Florida in 1994, Jeb said he wanted to “club this government into submission” and described himself as a “headbanging” conservative. During his 2003 second inaugural address, he laid out a utopian vision of radically shrinking government. “There would be no greater tribute to our maturity as a society,” he said, “than if we can make these buildings around us empty of workers—silent monuments to the time when government played a larger role than it deserved or could adequately fill.”

His staff is loyal: Few politicians inspire quite as much loyalty from their staffs as Bush. Time and again, former aides, friends, and associates deferred to Bush or his advisors before talking for this story. “I would describe him as flawless,” gushed one longtime friend, real estate developer Ed Easton.

His fundraising machine is in overdrive: Jeb’s team is well on its way toward what allies say is a loose goal of raising $100 million over the coming months to blow away the GOP field. At one $25,000 February event in McLean, Va., organizers drew such a large crowd they ran out of name tags. “It’s just an ass-kicking,” says a top fundraiser for one of Bush’s Republican rivals. 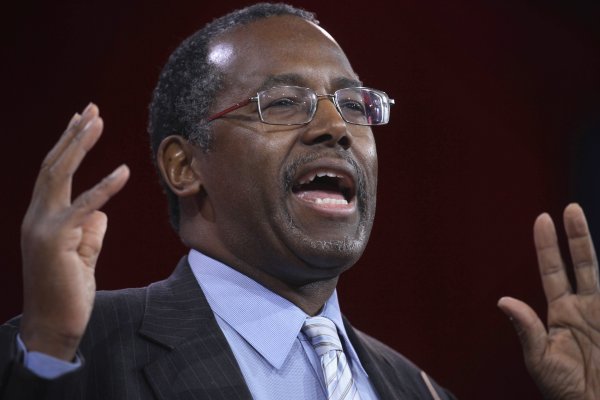 Ben Carson Apologizes For Comments on Homosexuality
Next Up: Editor's Pick