Attorney General Eric Holder said Wednesday that even though the Justice Department will not charge a Ferguson, Mo., police officer with civil rights violations in last year’s shooting death of Michael Brown, it will guarantee the city takes “immediate, wholesale and structural corrective action” after a report found a pattern of racial bias.

Earlier in the day, the Justice Department released a report Holder described as “searing” that detailed that bias, noting instances of bigoted emails, unjustified arrests and excessive force. In a separate report, investigators found officer Darren Wilson was not at fault for Brown’s death, which set off sometimes violent protests in Ferguson and across the country.

“Michael Brown’s death though tragic did not involve prosecutable conduct by Officer Wilson,” Holder said. “These findings may not be consistent with some people’s expectations.”

Holder cited several damning statistics about how the police routinely discriminated against black residents: almost 90% of unnecessary force was directed at African Americans; the use of police dogs was exclusively reserved for African Americans; and 90% of stops and arrests for “manner of walking in roadway” involved African Americans.

“Members of the community may not have been responding to a single isolated confrontation but also to a pervasive, coercive and deep lack of trust,” he said. “Some of those protesters were right.”

Among the recommendations, Holder continued, are the implementation of a “robust system of true community policing”; a review and analysis of the Ferguson police department’s stop, search, ticketing and arrest practices; more civilian involvement in law-enforcement’s decisionmaking; as well as new ways to more effectively respond to claims of officer misconduct.

The report also suggests changes to the municipal court system, which include modifying bond amounts and procedures for detention, an end to the practice of using arrest warrants to collect owed dues, among others. 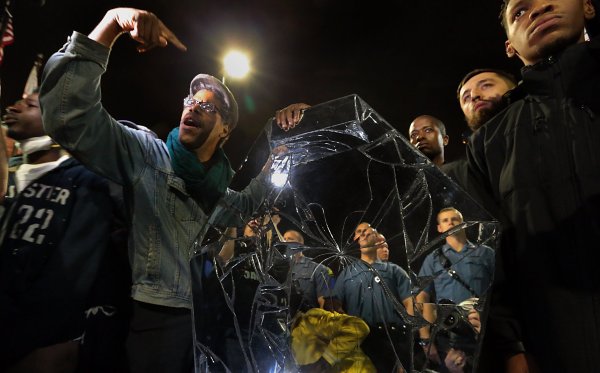