Sports Fans Will Tune Out the NFL in 10 Years

The Miami Heat's LeBron James in the second quarter against the San Antonio Spurs in Game 6 of the NBA Finals, on June 18, 2013.
Pedro Portal / Zuma Press

Mark Cuban, the high-profile entrepreneur and outspoken owner of the Dallas Mavericks, recently said, “Pigs get fat, hogs get slaughtered.” And the pig/hog he was referring to is the NFL.

Over the weekend, Cuban, who is well-known as both the brash owner of the 2011 NBA champion Mavericks and one of the stars of ABC’s “Shark Tank” entrepreneur-based reality TV show, went on a rant about the NFL. Essentially, Cuban warned the league—by far the biggest TV ratings superstar among pro sports—that it was getting greedy, what with more games planned for Thursday and Saturday nights, and speculation that Wednesday games could be next.

“They’re trying to take over every night of TV,” Cuban said to a group of reporters on Sunday night before a Mavericks-Nets game. “Initially, it’ll be the biggest rating thing there is. Then, if they get Saturday, now they’re impacting college. And then if they go to Wednesday, at some point, people get sick of it.”

Soon, Cuban warned, there will be a fan backlash, and the NFL will regret over-saturating the market. “I think the NFL is 10 years away from an implosion,” he said. “I’m just telling you: Pigs get fat, hogs get slaughtered. And they’re getting hoggy.

The warning probably would have been taken to heart to a greater degree by NFL interests had it been issued by someone without such obvious self-interest in stopping football from dominating TV viewing on more days of the week. Nonetheless, Cuban is hardly the only person who thinks the NFL could be getting too money hungry and is spreading itself too thin. Fans find a wide range of NFL policies to be greedy and odious, including practices such as charging full price for preseason games, blacking out games on TV locally when stadiums don’t sell out, and whacking season-ticket holders with ridiculous “seat fees” that are mandatory for anyone seeking the privilege of buying a home-game ticket package. NFL players themselves are worried about the prospect of more and more football—see the union smacking down owners’ quest to expand to an 18-game season—though admittedly players are most concerned about their own safety and team owners’ apparent unwillingness to share the wealth created by more games.

To what degree does Cuban’s assessment have validity? In light of record-high TV ratings for the NFL and commonplace season ticket waitlists for popular teams, it certainly seems like the league isn’t anywhere near the saturation point yet.

“Ubiquitous football won’t turn fans off on its own,” ESPN.com’s Kevin Seifert wrote in response to Cuban’s “hoggy” comments. Still, Seifert agreed that the possibility of something approaching implosion could take place down the line. “Here’s what will send people looking elsewhere: Ubiquitous bad football. If the inconsistent and/or short rest involved in playing on days other than Sunday diminishes the standard NFL quality of play, then the league will in fact have overextended.”

Jerry Jones, Dallas’s other loud, brash pro sports titan as owner of the NFL Cowboys, said that, to some degree, Cuban is right. “Any time you’re having success, then it’s a fool who’s not aware that that could change,” Jones said on Monday. But Jones, a graduate of the University of Arkansas, home of the Razorbacks, also sharply put Cuban in his place.

“I respect Mark,” Jones said. “But with all due respect, I know more about pigs than Mark does. I was taught as a Razorback to be lean and mean, not a little fat pig.” 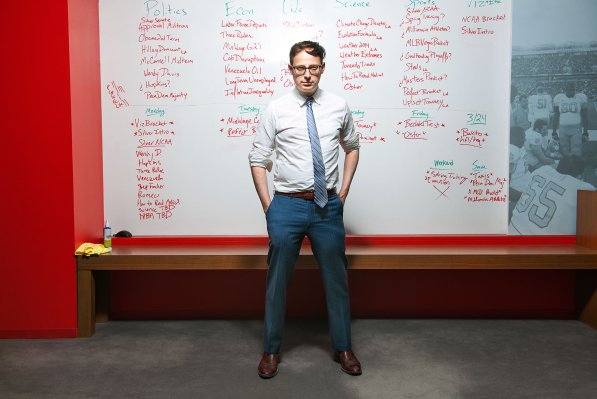 Hey, Sports Fans, It's Time For Math Class
Next Up: Editor's Pick