James Van Der Beek on Starring in CSI: Cyber: 'I Feel Like I Signed on With the New York Yankees'

James Van Der Beek is returning to television, but he’s not playing a comedic version of himself like in Don’t Trust the B-, nor is he playing a teen heartthrob like in Dawson’s Creek. Here, he’s playing Special Agent Elijah Mundo in the latest iteration of the CSI franchise, CSI: Cyber, which premieres March 4 on CBS.

Special Agent Mundo is current FBI and former military — or, as Van Der Beek put it in an interview with TIME: “He’s the guy that they call when they need someone to kick down a door or chase somebody.” While the show is about a whip-smart team of cyber law enforcement agents, Van Der Beek promises that CSI: Cyber isn’t just “people staring at a screen for 47 and a half minutes.” Instead, it’s a fast-paced crime drama that leverages the world’s growing cyber-insecurity into a new life for the long-time franchise.

TIME talked to Van Der Beek about trading comedy chops for karate chops, why he covers the camera on his laptop and what it was like working with Oscar winner Patricia Arquette.

TIME: Playing an action character is pretty different for you after years of comedy.

James Van Der Beek: Yeah. When I started doing comedy, I consciously thought, “What’s next?” so I started training to do some more physical stuff. I took Krav Maga, I studied jiu jitsu. I started training at a stunt gym, where a lot of stunt men work out. I started putting in work just to prepare myself for this kind of action stuff. I don’t think CBS knew that, though. I don’t think anyone knew that. But when they offered me the role and started shooting right away, thankfully I was ready.

I kind of thought Krav Maga was something Archer made up. What is it, exactly?

It’s the martial art that’s taught to the Israeli special forces. It seemed the most efficient and the most practical for combat. I thought it would serve as a good base for actual hand-to-hand combat that was most real-world applicable. Then I worked on modifying it to make it work on screen.

Have you tried it out in real life?

Thankfully, no. I think if I get in a fight it’s lose-lose. Either somebody beats me up and I lose. Or I beat somebody up and they take me to court, and I lose.

When you started working with Patricia Arquette, you had no idea that she would become an Oscar winner before the show even started. What’s it been like working with her?

I saw Boyhood around the same day that I got offered Cyber, so not only was it a chance to be part of a really big TV franchise and play a really great role, but I got to work with my favorite actress from my favorite movie of the year. Then the whole roll-out of the awards, every time she won an award, the next day she would come on set and the whole crew would applaud her. It was sweet.

CSI has been on for 15 years now. What’s it like stepping into such an established franchise?

I feel like I signed with the New York Yankees. I feel like I’m wearing pinstripes to work everyday. It’s probably the biggest franchise in all of television right now. We didn’t even shoot a pilot — they picked us up for 13 episodes on the air with a really capable showrunner who had been running CSI: New York and a crew who had mostly been on CSI: New York, so I felt like I had stepped into a machine that was already well-oiled and moving. It was up to us to try and keep up.

Are you working on a trademark move, like David Caruso taking off his sunglasses?

If your character did have a tagline, what would it be?

To keep things light for the crew, because we were working very long hours, I was constantly trying to come up with a tagline just to make the crew laugh after we had gotten the shot. We decided that “Cyberlicious!” was way too creepy, but my character’s name is Elijah Mundo, so the winner was I would hold up a microchip and look into the camera and say “Perfecta-Mundo.” Unfortunately, I don’t think those are going to make the final cut.

CSI: Cyber is about cybercrimes and hacking. Have you started changing your passwords a lot since you started working on the show?

Yeah. Human beings are hackable. If people put time and energy into it, they can get in. But there are some steps people can take, like changing your passwords, not logging into public free wifi. We’ve been learning about some dos and don’ts.

Have you taken to covering the cameras on your laptop and phone?

Not on my phone.

But you covered the camera on your laptop?

Was it there before you started working on the show?

It was not there before I started talking to the FBI. It’s pretty terrifying.

I’m going to find some tape right after this interview. So the FBI came in to consult with the cast?

Patricia’s character is based on Mary Aiken, a forensic cyber-psychologist who advises the FBI and INTERPOL. What she does is fascinating. Based on the clues left behind in the hack she can profile the human being that’s behind it. [With] just the tiniest little brush strokes based on code and references, she can create a clear picture of who is behind them. While cybercrimes seem faceless, they are all started by humans. Part of the fun of CSI: Cyber is putting together that puzzle.

What would you least want CSI: Cyber to find in your browser history?

All the naked pictures of Charley Koontz that I have in my storage. That would be the most embarrassing, but just because I work with him. It would be awkward.

Speaking of things available online, your Power Rangers fan film is back on the internet. How did that come about?

I was at dinner with my friend Adi Shankar, and I was asking him, “What are you up to next?” He said, “I want to do a hard-R version of the Mighty Morphin Power Rangers.” I said, “That’s crazy…and is there a role for me?” He said, “Dude, if you want to be in it, yes.” He introduced me to Joseph [Kahn, the director and scriptwriter] and I saw that he was just someone who wanted to make something really cool, and put it online for anyone to watch for free. To just make something unencumbered by any studio or financiers, just to follow his vision — it seemed like a really fun thing to do. We put a bunch of work into it and we all worked for free, and we gave it away to anyone who wanted to watch it on YouTube and Vimeo.

If someone did something similar with Dawson’s Creek, would you watch it, or would you be horrified?

Please! I love fan parody. You can’t own anything on the Internet. Everything is fair game. Someone sent me a Dawson’s Creek parody made with dachshunds called Dachshund’s Creek. I thought, “Pretty genius!” Not to get too high-minded about things, but art has always been created by people doing variations on a theme, going back to Mozart. I love that there’s this forum now where anybody can exercise their imagination, and take existing entertainment and filter it through their own lens, and create something original. I think that’s awesome. And then you get to see a tiny wig of your ’90s hair on a dachshund! There ain’t nothing wrong with that. 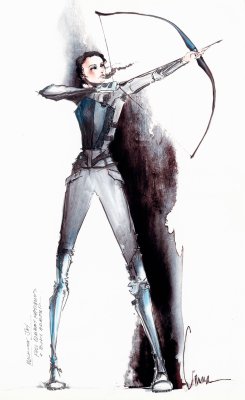 See Exclusive Sketches of the Mockingjay Battle Outfit
Next Up: Editor's Pick