Review: American Crime Is a Mystery With Meaning

American Crime is, like a lot of TV drama lately–Secrets and Lies, Broadchurch, The Killing–built around a murder. Someone has been killed, suspects have been apprehended, no one is sure yet what went down and why. But while the first four episodes of the series (premieres March 5 on ABC) are gripping, and each introduces new complexity to a sweeping story, I would not call it a murder mystery. And that’s precisely why it works.

What we know at the beginning of the pilot, written by John Ridley (screenwriter of Twelve Years a Slave), is that a young military veteran in Modesto, Calif., has been killed in a home invasion, which has left his wife in a coma, apparently sexually assaulted. The news reunites his divorced parents: Russ (Timothy Hutton), a gambling addict who abandoned his family, and Barb (Felicity Huffman), who was left to raise their children in public housing.

Russ and Barb are white. The suspects are African American and Hispanic. And Barb’s bitterness–both from the killing and residually from her experience as a single white mother in public housing–has curdled into racial resentment. She pushes to prosecute the killing as a bias crime, just as, she argues tactlessly, would happen if it had been “three whites who went into a black’s house, murdered him, raped his wife.”

The series, meanwhile, spins outward to take in the effects of the tragedy on a Mexican American family pulled into the case. Naive teen Tony Gutierrez (Johnny Ortiz) is arrested for abetting the accused killer, to the chagrin of his widower father Alonzo (Benito Martinez), who’s always stressed playing by the rules to the point of disdaining “illegal(s)… the ones who always make the rest of us look bad.”

And on the story moves: to the comatose woman’s parents (W. Earl Brown and Penelope Ann Miller) who begin clashing with Russ and Barb, especially once it emerges that their children had checkered histories that may be related to the murder motive; to Carter and Aubrey (Elvis Nolasco and Caitlin Gerard), two lovers and junkies separated when he’s arrested in connection with the case; and in turn to their families, including his sister Aliyah (Regina King), a Muslim convert who disapproves his dating a white woman.

The scariest thing about American Crime is the title. Just look at it: all grand and portentious, implying big statements about America and Society and How We Live Now. Social consciousness is the great careful-what-you-wish-for of TV; handle it right and you can end up with a classic like The Wire, but more often you get a pamphlet wrapped around a brick, like Crash (both the movie and the short-lived TV series) or NBC’s The Slap. Even an excellent show like The Good Wife gave us one of its worst episodes ever this January when it weighed in on a Ferguson-style race conflict.

But this series works, mostly, because Ridley avoids making pronouncements from 30,000 feet, instead keeping the focus at eye level. The racial dynamics of the crime and its investigation are implicit and they play out naturally without the script prodding them along. Instead, Ridley is telling stories about families responding in extremis, and that complicates the show’s societal themes because people are complicated. This plays out especially well in the Gutierrez family; on the one hand, Alonzo is caught between a system that assumes brown suspect guilty and family members who accuse him of wanting to be white, but on the other hand, he’s just a father, protective to a fault, trying to discover the elusive formula for safety and happiness for his children.

Martinez (previously of The Shield, lately of House of Cards), is heartbreaking as a father caught in a nightmare, and Huffman is simply outstanding, playing a discomfiting character with such empathy that she’s understandable, if not exactly admirable, in her soured grievance. The casting is strong all around, which helps pull the series through its weaker stretches, when it does start to drift into a morality play or an overwrought junkie melodrama. (The one thing the title does correctly signal: this is a drama that takes itself very, very seriously.)

But American Crime‘s sophisticated approach to from material that TV tends to render, well, black and white, recalls last year’s underrated The Divide on WE. Often, when broadcast networks try to do cable-style drama, the most noticeable thing missing is not the profanity (here, present but unobtrusively muted out) but the nuance. Ridley has made a good start at it, because his story is built around people, not personifications of ideas, nor devices meant to further a crime whodunit.

About which: there is an investigation in this series, and it moves along at its own pace, but the show is most interested in how people react to tragedy, how tragedy breeds more tragedy, and the extent to which people are allowed to escape the identities that others have assigned to them. There are, in fact, multiple mysteries in American Crime. But the murder is the least of them. 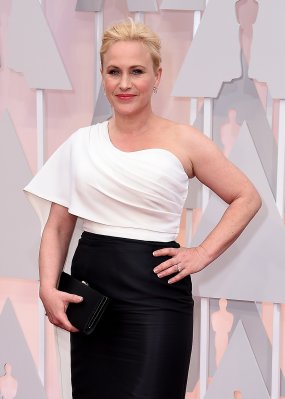