Seldom had the United States seemed to be more blessed than in early 1965. The country’s economy had been expanding steadily for four years, and unemployment was about 4%. Inflation, a serious problem in the late 1940s and early 1950s, was now negligible. Meanwhile, thanks to President Johnson’s predecessor, John F. Kennedy, the nightmare of nuclear war had retreated during the previous two years. The nation was freer to take care of its own needs, and it was building many thousands of miles of interstate highways and dozens of new schools and colleges to meet the needs of the Baby Boom generation, now between 5 and 22 years old. At the same time, Johnson was determined to push Medicare through Congress, making it possible for seniors to enjoy old age without the threat of illness that might not only take away their own savings, but those of their grown children.

One problem, however, still deeply troubled the nation: civil rights. For some weeks, Martin Luther King, Jr. had been leading a protest for voting rights in Selma, Ala., designed to open up voter registration rolls to the black citizens of that community, and, more broadly, of the whole deep south. Johnson had been preparing for possible additional legislative action to solve this problem for months, and the Justice Department had prepared a bill to allow the federal government to send registrars into the most affected states to sign up voters where local officials refused to do so. Johnson had been promising King such a bill for weeks, but he was waiting for an overwhelming northern consensus before putting the legislation before Congress

A dramatic event was necessary to get the attention of the whole nation, and on Sunday, Mar. 7, King’s Southern Christian Leadership Conference and the Student Non-violent Coordinating Committee (SNCC), along with the opposition of Sheriff Jim Clark of Selma and the Alabama State Police, provided it. Defying Alabama authorities, marchers were savagely beaten when they tried to cross the Edmund Pettus Bridge. National television cameras captured the spectacle of troopers beating Americans who simply wanted to vote, and the momentum for action became irresistible. A week later, LBJ called for the voting rights act before a joint session of Congress, and concluded, “We Shall Overcome.”

The premise of the civil rights bills, in those days, was simple. The United States was on the right track. The nation’s extraordinary economic growth had given the mass of the American people an unprecedented standard of living. It had defeated totalitarian states in the Second World War and held the line against Communism in the 20 years that followed. It stood for freedom and opportunity. The exclusion of Negro Americans (as they were still called) from the rights, privileges and benefits of American life was a blot upon the nation and a contradiction to its values, one that had to be removed were the United States to live up to its promises. This belief, in the wake of the 1964 election, clearly enjoyed overwhelming support. Johnson had won 60% of the popular vote and 44 states against Barry Goldwater, who had opposed the Civil Rights Act of 1964. LBJ could get virtually any proposal he wanted through Congress, and that was what he was about to do.

Yet on that very same day, Mar. 7, Johnson had already set in motion another series of events that would destroy not only his Presidency, but the entire postwar consensus which he seemed at that moment to embody. On March 7, U.S. Marines had landed in Da Nang—the first American ground forces to enter South Vietnam.

Several weeks earlier, in mid-February, the sustained bombing of North Vietnam had begun, in response to a Viet Cong attack on a US air base at Pleiku. Johnson calculatedly refused to acknowledge that the nation’s policy had changed, and the Administration portrayed the initial Marine deployment as a defensive measure. But that was false. The deployment was the first step in the execution of a massive war plan, one that would bring close to 200,000 young Americans into South Vietnam by the end of the year, and more than half a million by 1968.

Like the voting rights act, the landing at Da Nang had a long history, reflecting widely held beliefs in postwar America. It was the Eisenhower Administration, as I discovered twenty years ago when writing my book, American Tragedy, that had committed to defending Vietnam and neighboring Laos against Communist aggression. Eisenhower had been on the verge of implementing that commitment but Kennedy had immediately backed away from it. During the first year of his presidency Kennedy had received a long series of specific proposals from his cabinet and bureaucracy to send combat troops into Laos, Vietnam or both, but he had rejected them all and refused to declare South Vietnam a vital interest of the United States. Instead, he increased the American presence with 3,000 advisers and about 14,000 support troops, and focused on other foreign policy issues.

The public did not know this, but Johnson had announced that Vietnam was his Administration’s foreign policy priority within weeks of taking office. By March 1964 he had expressed willingness to go to war to save South Vietnam as soon as he had been re-elected himself. A planning exercise for American action began within days of his re-election, and it was finished by the first week of December. Sometime in the near future, the final paper stated, the United States would begin a sustained bombing campaign in North Vietnam, accompanied by “appropriate US deployments to handle any contingency.” An appendix to the approved document spelled out what that meant. The Marine battalion that had been floating in ships off Da Nang for months would land three days after the bombing began, and an entire Marine division would embark to join it. An Army brigade would follow at once, and several more divisions would arrive by the summer.

During the second half of February 1965, while the Selma protests grew and Great Society legislation began moving through Congress, Johnson refused to approve the war plan in writing, much less to announce it to the nation, but he evidently eventually told Robert McNamara to go ahead. After Da Nang, the other planned deployments followed the Marine landing almost at once. Johnson and his whole generation—the GI or “greatest” generation, as it has come to be known—believed in great enterprises. Civil rights was one such enterprise; defending threatened nations from Communism was another. With interstate highways spreading around the country, the Apollo program halfway underway and a booming economy, they—and most of their countrymen—thought they could do anything. More than a few prominent voices were already expressing skepticism about the Vietnam war, but they were drowned out.

Still, within two more years, the war had alienated much of the younger generation, substantially lowered Johnson’s popularity and split the Democratic Party. It also split the civil rights movement, and eventually broke the alliance between Johnson and Martin Luther King, Jr. American participation continued until 1973, on a scale that would be unimaginable today. The entire roster of killed in action in both the Iraq and Afghanistan wars is still less than that incurred in six months of combat during 1968. But the war could not be won.

Tragic heroes, Aristotle argued, are brought down not by evil, but by a combination of their own ambition for greatness and an ignorance of the facts. So it was for Lyndon Johnson, the “best and the brightest” who served him and, indeed, the whole leadership class of the postwar United States. The biggest casualty of the war, one from which we still suffer, was the consensus, the optimistic spirit and the belief in our national purpose. The landing at Da Nang was the beginning of the end of one of history’s greatest eras of civic achievement. No American under 55 has ever experienced such a spirit, and it is not clear that any American now living will experience it again. That is the tragic legacy of the events of March 7, 1965. 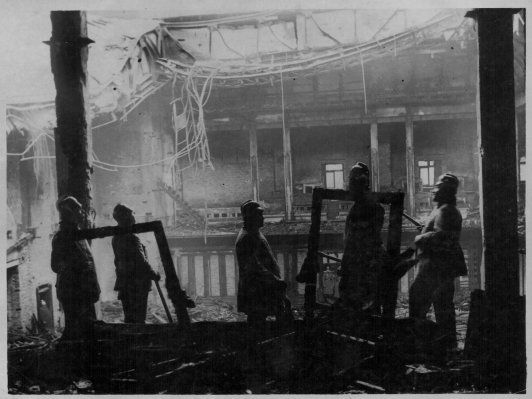 Who Started the Reichstag Fire?
Next Up: Editor's Pick