5 Non-Diet Factors That Can Affect Your Weight

For years I’ve heard experts say, “Weight loss simply comes down to calories in versus calories out.” But throughout my years as a practitioner, that simple philosophy hasn’t rung true. I’ve seen clients break a weight loss plateau after increasing their calorie intake—swapping processed “diet” food for whole, nutrient-rich clean foods and changing up their meal balance and timing.

I’ve also found that stressed-out, sleep-deprived clients have a more difficult time losing weight, which has been backed by numerous studies. And now, research shows that a number of other lifestyle and environmental factors also play roles in influencing metabolism and weight control.

Here are five on my radar, and tips for combating them.

Just-released animal research from Georgia State University found evidence that artificial preservatives used in many processed foods may be associated with metabolic problems, such as glucose intolerance and obesity. In rodents genetically prone to inflammatory gut diseases, the chemicals led to an increase in the severity and frequency of metabolic problems. Scientists believe the effects are due to changes in gut bacteria. When chemicals break down the mucus that lines and protects the gut, unhealthy bacteria come into contact with gut cells, which triggers inflammation, and as a result, changes in metabolism.

Combat it: This is preliminary research, but even more of a reason to read food labels and eat clean. When buying anything that comes in a box, bag, or jar, read the ingredient list first. My philosophy is that it should read like a recipe you could whip up in your own kitchen. For more info check out my previous post What Is Clean Eating?

Researchers from the University of Colorado at Boulder found that people who work the night shift burn fewer calories during a 24-hour period than those who work a normal schedule. The difference can lead to weight gain, even without an increase in calories. In other words, when you throw off your body’s circadian rhythm, your normal diet can suddenly become excessive due to a metabolic slowdown. This parallels research which found a relationship between body clock regulation, gut bacteria, and metabolism. When mice received gut bacteria from jet-lagged humans, they gained significant amounts of weight and had abnormally high blood sugar levels.

Combat it: If you work when most people are sleeping, or you travel through different time zones, seek out nutrient-rich foods that help boost satiety, increase metabolic rate, and regulate hunger, including fresh veggies and fruit, beans and lentils, nuts, ginger, hot peppers, and good old H2O. For more tips check out my previous post 9 Natural Appetite Suppressants That Actually Work.

Combat it: You may not be able to control the type or amount of support you receive from others, but there are effective techniques for improving your personal mindset. For example, practicing mindfulness meditation has been shown to help reduce stress, lower hunger hormones, and prevent weight gain. In a study published in the Journal of Obesity, this practice led to a greater loss of belly fat, without following a calorie-counting diet. I teach it in my private practice and I devoted an entire chapter to meditation in my upcoming book, Slim Down Now($20, amazon.com). If you’re a newbie, check out UCLA’s online classes.

It may seem odd for a nutrition professor to study flame retardants. But one such professional at the University of New Hampshire found that these substances—which are found in everything from furniture to carpet padding and electronics—trigger metabolic and liver problems that can lead to insulin resistance, a major cause of obesity. Compared to a control group, rats exposed to these chemicals experienced dramatic physiological changes. In just one month, levels of a key enzyme responsible for sugar and fat metabolism dropped by nearly 50% in the livers of rats exposed to flame retardants. According to the researcher, the average person has about 300 chemicals in his or her body that are man made, and we’re only beginning to understand the possible effects.

Combat it: You can’t eliminate your exposure to synthetic substances, but you can limit it. You can now find natural products in nearly every shopping category, including cosmetics, cleaning supplies, toys, and household goods. For help, check out resources and guides from organizations like the Environmental Working Group.

Read more: Get a Flat Belly in 4 Weeks

It’s no surprise that we take after our parents when it comes to body type, but new research shows that the type of bacteria that live in our digestive systems are also influenced by genetics. That’s an important finding, because more and more research indicates that gut bacteria are strongly connected to weight control. Scientists at King’s College London found that identical twins had a similar abundance of specific types of gut bacteria, compared to non-identical twins. This indicates that genes strongly influence bacteria, since identical twins share 100% of their genes, while non-identical twins share about 50% of their genes. They also found that the presence of a specific type of bacteria was most influenced by genetics, and that type strongly correlated with leanness. In fact, transplanting this bacteria to the digestive systems of mice caused the animals to gain less weight than those that did not receive the bacteria.

Combat it: You can’t change your genetics, but there’s a great deal of research now about how you can transform your good gut bacteria. The top strategy: avoid artificial and processed foods, and load up on a variety of whole, plant-based foods, including vegetables and fruits, whole grains, beans and lentils, and fermented foods like kimchi and sauerkraut. For more about how to eat more plant-based foods, check out my previous post 5 Delicious Pasta Alternatives. 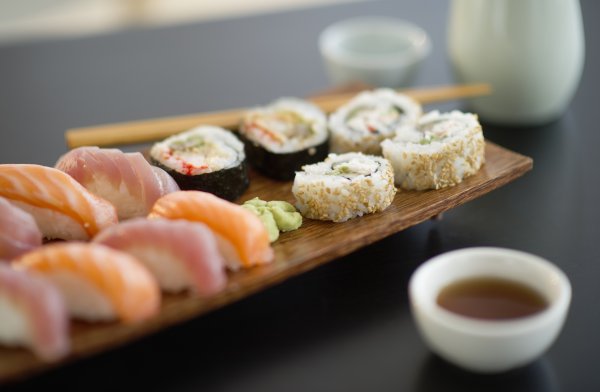 4 Superfoods You Might Be Overeating
Next Up: Editor's Pick