Ideas
By Maria Shriver and Jennifer Siebel Newsom
Maria Shriver is a mother of four, a Peabody and Emmy Award-winning journalist and producer, a six-time New York Times best-selling author, and an NBC News Special Anchor covering the shifting roles, emerging power and evolving needs of women in modern life. Jennifer Siebel Newsom is a filmmaker, advocate, and President and CEO of the non-profit organization The Representation Project, which inspires individuals and communities to challenge and overcome limiting gender stereotypes.

Millions of boys hear these words, these phrases, these commands, almost every day of their lives. They absorb the words and then spend a lifetime dealing with their effects. For our young boys, the path from boyhood to manhood is strewn with harmful words and stereotypes.

Our new film, The Mask You Live In, explores the confining stereotypes that boys are exposed to as they become men. Through personal narratives and expert commentary, the film delves into the destructive and often conflicting messages that boys are being subjected to on a daily basis. Messages that favor dominance over empathy. Physical strength over compassion. Violence over kindness. Sex over love.

It’s a hard time to be a boy, and the facts are something that should give us all pause. Today, boys are more likely to be expelled or kicked out of school than girls. Young men are only 43 percent of enrollees in post-secondary institutions. Boys are more likely to engage in violent crime, binge drinking, and drugs. Male campus sexual assault is commonplace, and mass shootings involving boys and men have become an epidemic. Jails are packed to the rafters with men. And men commit 79 percent of all suicides in the United States. The status quo is unacceptable.

We both have worked for women’s empowerment, and we are both mothers of boys. For years The Shriver Report has chronicled the shifting American family, revealing that the traditional dynamic has changed and both sexes now need a new language with which to communicate, and a new understanding of how to get along. Through our separate work with Miss Representation, The Representation Project and A Woman’s Nation, which produces The Shriver Report special editions, we’ve come together to tackle this next subject because we believe it’s no longer enough to just elevate our daughters. Boys and girls benefit when each is empowered and encouraged to be their most authentic selves.

Starting today, you can bring The Mask You Live In to your community by hosting a screening. Visit The Representation Project website for details. Our mission is to make the film available for all people to see, so these complex topics can be discussed in schools, businesses, foundations, community organizations and homes.

We hope the film spurs a national debate about how we can help our young boys. It’s incumbent upon all of us to better understand the pressures they face, the mixed messages they receive, and the lack of guidance that is available to them as they traverse the narrow path towards manhood.

The Mask You Live In is not about shaming men or telling them what to do. It’s about bringing us all together to support our boys and to address the alarming statistics around the ‘boy crisis’ in America.

We’ve come a long way since women were on Venus and men were on Mars. But we need to go further towards creating a more compassionate, caring, conscious culture for our girls and our boys. This is about understanding what is beneath the surface of our boys’ tough facades, helping them to “take off their masks,” asking them the questions to find out what’s really going on—and being strong enough to accept them for who they really are.

Our goal is to work towards a society of gender respect—adopting new language, throwing out stereotypes, and helping boys to share their true feelings. This can only help us move forward in the right direction.

Maria Shriver is a mother of four, a Peabody and Emmy Award-winning journalist and producer, a six-time New York Times best-selling author, and an NBC News Special Anchor covering the shifting roles, emerging power and evolving needs of women in modern life. She is the founder of A Woman’s Nation, which has produced a series of Shriver Reports that chronicle and explore seismic shifts in American culture and society affecting women today. She is also an Executive Producer of the Academy Award-winning film Still Alice, which tells the tale of a woman affected by early onset Alzheimer’s disease. In the coming weeks, Shriver will announce Maria Shriver’s Campaign to Wipe Out Alzheimer’s in partnership with A Woman’s Nation, the Alzheimer’s Association and a Global Community of Women.

Jennifer Siebel Newsom is a filmmaker, advocate, and President and CEO of the non-profit organization The Representation Project, which inspires individuals and communities to challenge and overcome limiting gender stereotypes. Her first film, Miss Representation, is an award-winning documentary which exposed the underrepresentation of women in positions of power and influence in America. Her second film, The Mask You Live In, premiered at the Sundance Film Festival in January 2015. She is also an Executive Producer on The Invisible War and The Hunting Ground. She is married to California Lt. Gov. Gavin Newsom, and is the mother of three young children.

Read next: How To Shake Up Gender Norms 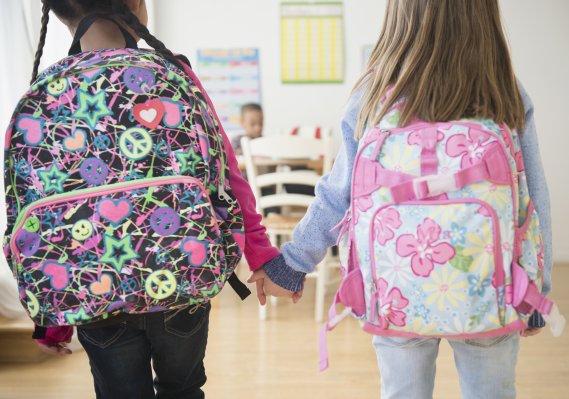 6 Things You Should Know About Young Girls in School
Next Up: Editor's Pick