Why March 4 is a Great Day for Women in Politics

On the same date, March 4, many years apart, two women made history in American politics. In 1917, Jeannette Rankin took office as a representative of Montana, the first woman ever in Congress. The first female member of a president’s cabinet, Frances Perkins, took her post on Mar. 4, 1933. Both were pioneers, carving out their roles as they went along. But their accomplishments extended beyond just showing up as the first women in what had previously been male political spheres. Rankin took an influential stand for women’s suffrage and pacifism, and Perkins’ ideas laid the groundwork for the New Deal and social security.

“They both had to invent the roles for themselves in public life,” says Kirstin Downey, author of The Woman Behind the New Deal, a biography of Perkins. “And they had to do it by being strong and independent-minded.”

The two women were born the same year, 1880 (although Perkins, who notoriously lied about her age, always claimed 1882). Rankin was raised in Montana by a rancher and a schoolteacher. After working for years in the woman’s suffrage movement, in 1914 she succeeded in winning women the right to vote in her state. Two years later she was running for one of two of the state’s at-large Congressional seats, which she secured by 6,000 votes with the help of Montana’s newly enfranchised women.

Pacifism played a major role in the women’s suffrage movement, and Rankin was one of its staunchest champions. She took office amid intense debate over whether or not the U.S. should enter World War I. In the final vote, she was one of 50 dissenters, a decision that generated controversy in the media and among her fellow suffragists. Among the citizens of Montana, her move wasn’t as unpopular, but new state legislation changed the rules about Congressional elections, placing the Republican Rankin in an overwhelmingly Democratic district. Rankin decided to gamble on a Senate race in 1918, which she lost.

Although she wanted to be remembered as the congresswoman who voted for women’s suffrage nationwide, the 19th Amendment passed in 1919, when she was out of office. Instead, she immortalized her reputation as a pacifist when in 1940 she was elected to a House seat a second time. After the attacks on Pearl Harbor, she stood firm as the only vote against the United States entering World War II. Responding to nearly universal pleas to change her vote to a “yes,” or at least to abstain, she responded, “As a woman I can’t go to war, and I refuse to send anyone else.” The ethical stand she took drew a major backlash, making it difficult to do much with the rest of her term and obliterating her chances at reelection.

Frances Perkins, for her part, got her political start in 1911 when she witnessed the horrific Triangle Shirtwaist Factory fire in New York City. She made a name for herself on work-safety commissions in the city, helping to conceive and draft many fire regulations that still exist today. When Franklin Delano Roosevelt was elected the governor of New York, he appointed her as his industrial commissioner. According to Downey, she was one of his most trusted, lifelong advisers. Yet her appointment to Secretary of Labor was still uncertain after he won the presidency, as her gender made her a highly controversial choice. When Roosevelt offered her the job, Downey says, she accepted with conditions—that he let her pursue policy goals that would eventually make up the New Deal.

“She’s really the creator of social security. She’s the driving force behind the Federal Labor Standards Act. It lead to the 40-hour work week. It banned child labor,” Downey tells TIME. “And it changed America.”

To be taken seriously, Perkins dressed very modestly, rarely wearing any makeup. She noted that men tended to take more seriously women who reminded them of their mothers—one of many observations she recorded in a journal she’d been keeping throughout her professional career titled, “Notes on the Male Mind.” She was quiet in meetings, lest she interrupt and be shouted down, or worse, bruise the ego of the man she sought to contradict. She later wrote:

“I tried to have as much of a mask as possible. I wanted to give the impression of being a quiet, orderly woman who didn’t buzz-buzz all the time. … I knew that a lady interposing an idea into men’s conversation is very unwelcome. I just proceeded on the theory that this was a gentleman’s conversation on the porch of a golf club perhaps. You didn’t butt in with bright ideas.”

Rankin and Perkins confronted odds that exceeded under-representation, from repressive stereotyping to an absence of bathroom facilities. When Rankin first took office, American women were three years away from having the vote guaranteed. Perkins herself was unable to vote for much of her early political career, until New York state voted for suffrage in 1917.

“There was a lot of stigma attached to them. There was an unsavory association to unattended women,” Downey says. “Back then there was a saying about women, ‘You only want to be in the newspaper twice—when you’re married and when you die.'”

Perkins hoped her unquestionable success would earn her a comfortable professorship after her retirement from public life. Unfortunately this wasn’t the case. She had trouble securing offers, moving universities often when she wasn’t granted tenure. Eventually, she ended up at Cornell, where she stayed until her death in 1965.

Meanwhile, though Rankin never again took public office, she used her notoriety as a pacifist to continue lobbying against war. She led a peace march in the Washington in 1968 to protest U.S. involvement in Vietnam, and when she died at age 91 in 1972, she was considering yet another run for Congress. 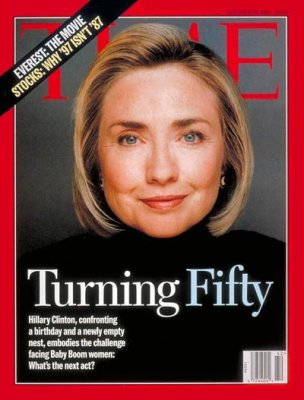 Hillary Clinton's E-Mail Trouble Started in 1997
Next Up: Editor's Pick