The gas supply tubes run along the houses built near the steel factories of Charleroi. Before the electric upgrade of the blast furnace these tubes used to provide the energy necessary to this operation. The factory and furnace infringe and loom over the lives of the inhabitants.
Giovanni Troilo
By Olivier Laurent

World Press Photo is standing firm behind its decision to uphold the Contemporary Issues award it bequeathed upon Giovanni Troilo after the Italian photographer was accused of staging his work.

The claims came after the mayor of Charleroi, Belgium, where Troilo shot his award-winning project The Dark Heart of Europe, wrote to World Press Photo to contest the work, as first revealed by the French photography website OAI13.

“The photographer’s constructed photographic subject is regarded by [Charleroi] as a serious distortion of reality that undermines the city and its inhabitants, as well as the profession of photojournalist,” wrote Charleroi’s mayor, Paul Magnette. “The falsified and misleading captions, the travesty of reality, the construction of striking images staged by the photographer are all profoundly dishonest and fail to respect the codes of journalistic ethics. In our opinion, this work does not comply with the objective of the competition.”

After a three-day investigation, World Press Photo found “no grounds for doubting the photographer’s integrity in carrying out his work,” the organization said in a statement. “No misleading facts have been uncovered in the caption information that was made available for the jury. As a result Giovanni Troilo’s award stands in the 2015 Photo Contest.”

The extent of the organization’s investigation, World Press Photo told TIME, was “scanning local newspapers for reports about crime and other issues in the suburbs [of Charleroi],” talking to the city’s mayor and asking the photographer to provide “further clarification about his work methods.” Though the question at hand is whether the photographs were staged, World Press Photo did not directly contact Troilo’s subjects.

“We had to judge [Troilo’s award] again on the facts and basis of his declaration,” the organization’s managing director Lars Boering told TIME. “So our decision to confirm his award is based on the story he shared with us.”

The final decision was made by the chair of this year’s jury, Michele McNally of the New York Times; the secretary of the jury, David Campbell; and Boering himself. McNally was unable to comment at the time of writing.

Speaking to TIME, Troilo said that none of his images had been staged — including a particularly controversial photograph of his cousin having sex in the back of a car. “I started this project one year ago,” Troilo said in a phone interview facilitated by a translator. “I’ve spent my childhood there. And I saw different scenes of sex that were pretty rude, to tell you the truth.”

As Troilo worked on his project, which uses Charleroi to discuss the slow decline of Europe, his cousin repeatedly suggested that he photograph him while having sex. “What I did is pretty much letting them know that there was a camera, and I just took a photo,” says Troilo. “They knew I was there, and they didn’t do anything different than what they would have done.”

The photographer, however, admitted to using a flashlight underneath the couple to improve the image’s quality.

More problematic is Troilo’s use of the words “psychiatric asylum” in a caption portraying a woman laying her head on a table. In its investigation, World Press Photo learned that the stage for Troilo’s photo was a nursing home, which TIME independently confirmed. And while Troilo claimed that the home had a psychiatric ward, a spokesperson for the institution said it only had people suffering from Alzheimer and Parkinson’s disease, two degenerative disorders common in old age.

Boering tells TIME that his organization asked Troilo to explain where this particular image was shot. “He explained to us that it was a nursing home where his aunt also was,” he says. “I think it was a bad choice of words from Giovanni. I need to check with the team that researched it, but I don’t think it was considered a big issue.”

Whether or not it was a big issue, the controversy has damaged World Press Photo’s reputation, with photographers calling for a boycott of next year’s competition. The organization had to issue two clarifications to statements it made in the last three weeks, including one that was interpreted as condoning staging in photojournalism — a claim World Press Photo clarified earlier today.

“There are always debates about World Press Photo,” said Boering, who acknowledged that his organization had suffered a blow. “It’s up to us to start a dialogue and listen to all the opinions. If we think as a professional community we should change things concerning manipulations and ethics, we will listen and we will change [our] rules as well.”

World Press Photo is not “an arrogant foundation that does it all by itself and doesn’t consult the industry,” he added. “On the contrary, that’s something that will need to be [addressed] in the next couple of months. At this point, it’s damaging World Press Photo because there are a lot of people expressing their discontent with this. But we have to slow down this yelling and look back at the facts, and listen to people who are in favor of this decision.” That debate, however, should not take place on social media, he said.

“We have to realize that the photos and the stories, and everything that we judge, are being sent in by the professional community,” Boering added. “We should look at this both ways: what we get is what we judge; and what we judge will end up into a result; and that result will always be debated but it’s also very important for the photographic community to realize what’s [happening] on the side of people who produce work. What is staging? Are all photographers showing what they see in front of their lenses? It’s very hard for the audience to know what happened around [a] photo when it was taken. It’s something you have to keep in mind.”

Update: World Press Photo has since announced it was reopening its investigation into Troilo’s award. 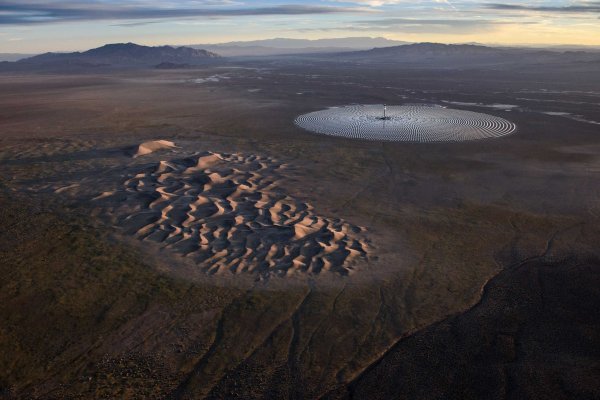 See the World's Largest Solar Plants From Above
Next Up: Editor's Pick