“Remember,” episode 12 of the fifth season of The Walking Dead, is a study in contrasts.

The group rolls up to a self-sustained, well-fortified city state in Alexandria, Virginia to find a land that time forgot. The community has been insulated—metaphorically and literally—from the worst of the outbreak, and life there seems not so distant from pre-apocalyptic times. Electricity and water still flow; people still wear pastel cardigans and tasseled loafers; there are even over-sized coffee table books in plenty.

Rick is introduced to Deanna, the community’s leader, who looks like she walked out of a Ralph Lauren catalogue, not the pages of a Cormack McCarthy novel. The former Ohio congresswoman has domain over the planned community, which is kitted with solar panels and an environmentally friendly water treatment system. She welcomes the group, she says, to help strengthen the community’s numbers. Rick, not quite believing it all, tells her she “should keep your gates closed. People out there are always looking for an angle…how they can use you to live.”

Life in Shangri-La is, well, weird. Rick and Carl walk around their new home (starting in the low-$800,000s!) somewhat dazed. How to make sense of Restoration Hardware reclaimed wood coffee tables and Kohler kitchen fixtures when you’ve been scraping by for so long? Most of the group’s main characters go through some similar kind of disbelief at their new surroundings—Carol takes to it quickly; Daryl, not so much. You could have called this episode Abercrombie & Feral.

After a nice svhitz and a shave, Rick meets some of the community’s other members. There’s Jessie, a mother of two, who offers him a hair cut. There’s Aiden, an enforcer with a temper. There are a few teens in various shades of moody, who Carl befriends. By the end of the episode, the group has decided to assimilate. Deanna, who jokes that “the communists won after all,” assigns each of them a job. She makes Michonne and Rick the community’s constables.

In the final frames, Rick dons a uniform once again. When Carol and Daryl wonder out loud if the community is really capable of dealing with the harsh reality of the world, Rick tells them somewhat ominously: “If they can’t make it, then we’ll just take this place.” 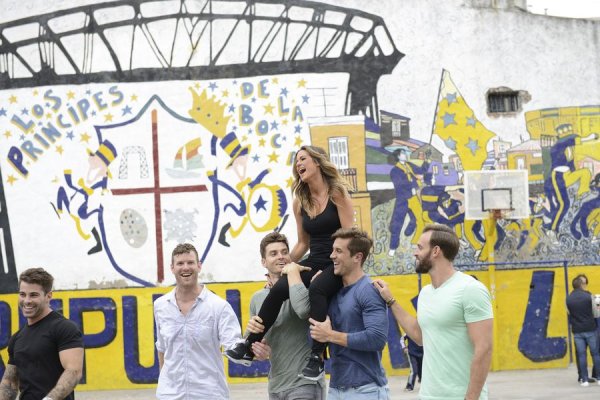 <i>The Bachelorette</i> Watch: Go Ahead and Cry For Jo Jo, Argentina
Next Up: Editor's Pick