Netanyahu Overshadows His Own Speech

A partisan debate over the terms of Israeli Prime Minister Benjamin Netanyahu’s visit to the U.S. threatened to overshadow his message, as he arrived Sunday in the U.S. two days before an address to the Congress about the dangers of President Barack Obama’s recent moves to cut a deal with Iran over its nuclear program.

An NBC/Wall Street Journal poll released Sunday found that 48% of registered voters said Republicans in Congress should not have invited Netanyahu without first checking with Obama, with just 30% of Americans supporting the move. President Obama has refused to meet the Israeli leader, citing the proximity of the visit on Israel’s elections. Obama’s National Security Adviser Susan Rice, cast the speech last week as “destructive to the fabric of U.S.-Israeli ties.”

At the American Israel Public Affairs Committee’s annual policy conference in Washington, D.C., Sunday, the mood was uneasy, as the controversy overshadowed the conference and thrust the bipartisan organization into the uncomfortable position of lobbying lawmakers to attend a speech, as opposed to its key legislative priority: calling on Congress to play a role in reviewing the Iran agreement. “Frankly all of us should be concerned that care so deeply about the bipartisan support for the U.S.-Israel relationship,” AIPAC CEO Howard Kohr said Sunday. “We have spent active hours lobbying for members of the House and Senate to attend this speech.”

In the lead-up to the speech, dueling ads from left and right focused on the speech and who would attend. An incendiary ad from a group founded by Rabbi Shmuley Boteach and linked to Republican mega-donor Sheldon Adelson drew condemnation from all corners for accusing Rice of turning a blind eye to genocide. The ad compared Rice’s role in shaping a withdrawn U.S. policy during the 1994 Rwanda genocide, which Rice herself has since criticized, with her position on Netanyahu’s visit. “Ms. Rice may be blind to the issue of genocide,” the ad reads, under a picture of the National Security Adviser superimposed on the image of human skulls. The text goes on to suggest she has been more gracious in her dealings with Iran’s government than Israel’s. “She should treat our ally with at least as much diplomatic courtesy as she does the committed enemy of both our nations.”

Netanyahu has a long track record of using addresses to Congress for his domestic political purposes. “I am leaving for Washington on a fateful, even historic, mission. I feel that I am the emissary of all Israelis, even those who disagree with me, of the entire Jewish People,” Netanyahu told reporters before departing. His coalition faces a close election on March 17.

In the U.S., the visit has turned into a political weapon. “The really only conflict here is between the White House and Israel,” said Speaker of the House John Boehner Sunday on CBS’s Face the Nation.

At AIPAC, Senator Ben Cardin, a Democrat from Maryland, sought to challenge that message. “The circumstances surrounding the invitation were not what they should have been,” he said. “We all understand that. But don’t lose focus. The bad guy is Iran.”

In Israel as well, the terms of the visit had become a point of political debate. “Netanyahu’s speech is diverting the question to be on whether he should speak or not in Congress rather than the security issue with Iran, and we think this is wrong,” said Israeli opposition Knesset member Erel Margalit. “We saw a poll that had the American public divided over whether Netanyahu should speak or not, instead of having 90% against the threshold nuclear state of Iran, which would have united everyone.”

To pre-empt claims that the White House has not sufficiently supported Israel, the National Security Council forwarded Democratic allies—and later posted online—a pocket card highlighting the U.S.-Israel relationship under Obama casting the President as a “strong defender” of Israel. “Under President Obama’s leadership, American engagement with Israel has grown and strengthened to an unprecedented degree,” it reads. The handout did not include any mention of Iran.

“The Administration doesn’t want to talk about the Iran deal — so instead of hearing about sanctions relief and sunset clauses, we’ve had weeks of high-school-level melodrama about speech protocol and a bad guy named Bibi,” said Noah Pollak, the executive director of the hawkish Emergency Committee for Israel. “The Administration has temporarily distracted from the Iran talks, but it’s also turned the Netanyahu speech into the Super Bowl of foreign policy. In the end it may turn out that Obama only drew more attention to what a bad deal he’s trying to cut with Iran.” 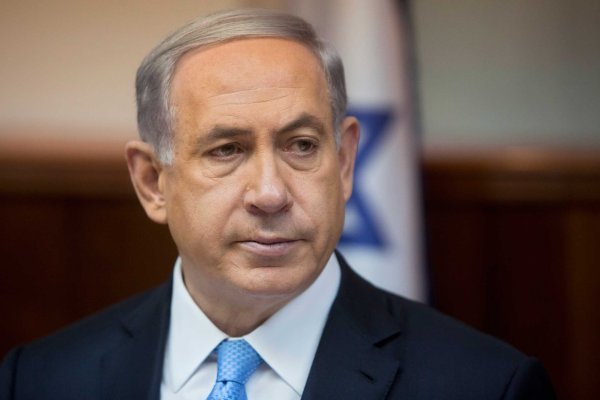