A woman holds a poster reading 'propaganda kills' as people march in memory of opposition leader Boris Nemtsov near the Kremlin in Moscow on March 1, 2015.
Yuri Kozyrev—Noor for TIME
By Charly Wilder / Moscow

Tens of thousands of people marched Sunday under a gray Moscow sky in honor of Boris Nemtsov, the opposition figure who was gunned down Friday night mere steps from the Kremlin. Clutching flowers, Russian flags and signs reading “Propaganda kills,” and “I am not afraid,” throngs of demonstrators walked together over the bridge where the liberal politician who served as first Deputy Prime Minister under Boris Yeltsin was reportedly shot four times in the back while walking with his girlfriend — just a few hours after going on the radio to encourage people to protest the policies of President Vladimir Putin.

“It’s not just about Boris Nemtsov. We all were shot in the heart,” said Alexei Glikov, a 51-year-old advertising executive who had not planned to come to the rally originally scheduled for Sunday. “But after what happened, I had to come.”

Nemtsov’s murder has sent waves of shock and grief through an already battered Russian opposition. But for one day at least, it also seems to have galvanized them. Organizers of Sunday’s march said turnout far outstripped expectations, with Russian media reporting that more than 56,000 people passed through metal detectors set up at the start of the route in Slavic Square on the banks of the Moscow River.

“The numbers have been very, very impressive,” said Leonid Volkov, one of the organizers of the march and a member of the Party of Progress founded by embattled opposition leader and anticorruption blogger Alexei Navalny. Navalny himself couldn’t attend the rally because he’s currently in jail, where he’s serving a 15-day sentence for breaking his probation by campaigning for the originally planned march. “I think this is definitely the largest rally since 2011–2012,” added Volkov, referring to the mass Bolotnaya Square protests that followed Putin’s return to the presidency.

Nemtsov, a gregarious physicist, built a reputation as a committed economic reformer while serving as governor of Nizhny Novgorod in the 1990s. Yeltsin appointed him to his government and reportedly considered Nemtsov to be his successor before instead choosing Vladimir Putin. After Putin’s rise to power, Nemtsov became one of his most vocal critics.

“We came here to honor Boris Nemtsov’s memory,” said Nadya Tolokonnikova of the punk collective Pussy Riot as she made her way through the crowd with Pyotr Pavlensky, a protest artist best known for nailing his scrotum to the ground in Red Square in 2013. Asked by TIME whether state propaganda has made Russia an unsafe place for political dissenters, Tolokonnikova said, “Of course, yes. I have felt it in my own skin.”

Over the past year, the major Russian television networks, all of which are owned or controlled by the Kremlin, have pumped out endless hours of vitriol against those who oppose Putin and his policies, saying that Nemtsov, Navalny, Tolokonnikova and others are “internal enemies,” part of a nefarious “fifth column” intent on weakening Russia. Whether or not the Kremlin had anything to do with Nemtsov’s murder, there is a wide perception among the opposition that it was made possible by the fanged patriotic fervor Putin has cultivated over the past year.

“It’s an act meant to instill fear in people,” said Lyudmila, a pensioner who said her heart had called her to the march. “They are clearing the field,” added her husband Alexander, who called Nemtsov a “brave and honest man” who “unquestionably” died because of his political beliefs.

“This was absolutely a political action,” said Irina Khakamada, a personal friend and former political ally of Nemtsov’s, as she walked across the mud-splattered boulevard. In her opinion, his murder was “not directly the action of President Putin, because this isn’t so profitable for him. But it was done by radicals as a result of the information war that’s been happening inside the country. We’re hearing all the time about the fifth column, the enemies of the state — all opposition, not just the politicians, all people with independent minds.”

As the crowd swelled in numbers, rage and frustration were palpable. Demonstrators locked arms and chanted “Russia without Putin” and “Putin is a murderer,” raising a specter of mass defiance not seen for years in the Russian capital. The Bolotnaya Square protests ended in dozens of arrests and new draconian laws limiting public demonstrations. In the years since, the Kremlin has further tightened the screws on the media and passed rigid laws curbing artistic expression. The events of the past year — the annexation of Crimea, the war in Ukraine and resulting Western sanctions have only boosted Putin’s approval rating, which currently stands at an unbelievable 86%, according to the latest poll by Moscow’s independent Levada Center. Some expressed hope that Nemtsov’s death could be a turning point.

“The rally today, it creates very strong political momentum for the opposition, which was in apathy and disorientation over the past year because of all the Ukrainian events,” said organizer Volkov.

Yet many people were quick to add that all of their hopes, in the end, were just that.

“I am pessimistic about the opposition movement here,” said Vera Gavrilina, a 24-year-old in a fur coat and red lipstick carrying a bouquet of white roses. “There aren’t enough people and the TV propaganda has such a strong influence. I hope this will be a turning point, but I don’t think it will be.” 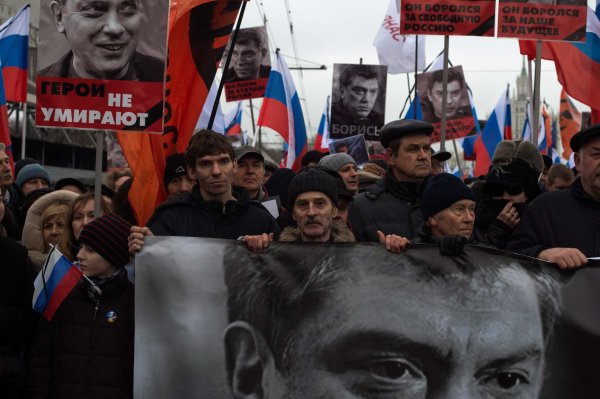 See Russians Come Out in Droves to Mourn a Slain Putin Critic
Next Up: Editor's Pick