Why the Kremlin Is Blaming Putin Critic's Murder on a 'Provocation'

Boris Nemtsov, center, and other opposition activists attend a rally at Red Square on April 8, 2012 in Moscow.
Sasha Mordovets—Getty Images
By Simon Shuster

On Saturday the Kremlin trotted out a favorite piece of Russian doublespeak to explain the murder of one of its most strident critics. Boris Nemtsov, a leading figure in the opposition to President Vladimir Putin, was shot dead around midnight on Friday a short walk from Red Square, and within hours the state had deemed the killing a provokatsiya, a word whose translation into English, “provocation,” does not begin to capture its ability in Russian to shift blame and manipulate suspicion.

The first one to offer this explanation was Putin, who remarked through his spokesman in the early hours of Saturday morning, as Nemtsov’s body still lay on the asphalt, that the murder “bears all the hallmarks of a provocation.” The phrase, vague as it seems, then appeared to set the tone for the subsequent coverage of the murder on state-run television and the pronouncements of Putin’s allies.

Sergei Markov, a long-time Kremlin spindoctor, wrote on his Facebook page that “Nemtsov was killed by Putin’s enemies with the aim of framing Putin for the murder.” Ramzan Kadyrov, the leader of the region of Chechnya, took things a step further: “There are no doubts whatsoever that Western special services organized Nemtsov’s murder,” he wrote on his Instagram account.

But to the average viewer of state-TV, Putin’s use of the term “provocation” would be enough to evoke the invisible hand of Russia’s enemies, while also hinting that the Kremlin, once provoked, could be justified in responding in unpredictable ways. Back in 1983, for instance, the Soviet Union claimed that its downing of a Korean airliner full of passengers was in fact the result of a blatant American provocation.

The term was similarly useful in redirecting blame in Nemtsov’s case, as investigators made clear in their statement on Saturday. Before they could even complete the forensic testing in the case, the sleuths at the Investigative Committee, Russia’s version of the FBI, declared that Nemtsov had likely become a “sacrificial victim” in a provocation staged by those who “want to destabilize the political situation” in Russia.

The Committee’s statement went on to offer a variety of colorful theories, suggesting that anyone from Islamic extremists to “very radical” but unspecified forces from Ukraine could be behind the murder. For good measure, they left open the possibility that Nemtsov was killed due to a personal or business dispute.

But the investigators made no mention of the people most obviously interested in silencing Nemtsov – the state officials he had for years antagonized with his campaigns against corruption. By leaving that out of their initial conclusions, the investigators in effect dismissed even the slightest possibility that the President’s supporters, not to mention his direct subordinates, could be behind the assassination of a man portrayed for years on Kremlin-run media as an enemy of the state.

Much the same has been the case after each of the violent attacks that have befallen Putin’s opponents during his 15 years in power. After every one of these crimes, state officials have suggested that the attackers were not out to kill or hurt their victims, but to tarnish Putin’s good name.

On one occasion in 2007, Putin’s adviser even lumped two of the most notorious unsolved murders together – those of the investigative journalist Anna Politkovskaya in October 2006 and the whistleblower Alexander Litvinenko the following month – as a “well-planned provocation” against Russia. “There are strong groups that unite with each other in a constant onslaught against the President,” the adviser, Igor Shuvalov, said in explaining the murders, which seemed to have no clear connection to each other.

It never became clear what “strong groups” he was talking about, as no one was ever charged in Russia for ordering those two killings. Last fall, the Kremlin even refused to cooperate with a public inquiry into Litvinenko’s death in London, where he was poisoned in 2006 with radioactive polonium. British authorities have linked that murder to Russian security services, but have been stonewalled in response.

Given those precedents, the investigation into Nemtsov’s shooting will likely be just as murky, leaving most Russians to choose from the range of theories their leaders have already offered them, and to wonder what else to expect from a Kremlin so crudely provoked. 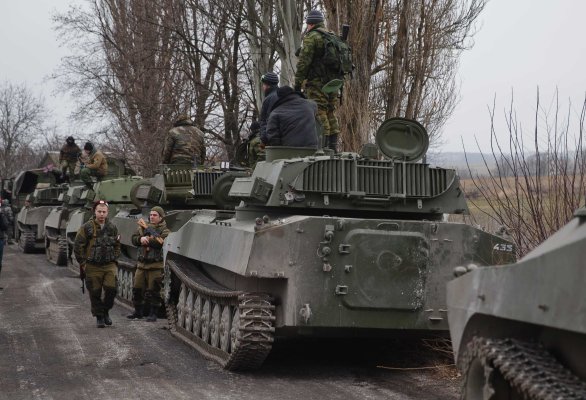 5 Disputed Numbers That Explain Geopolitics
Next Up: Editor's Pick