These Are America’s Happiest (and Most Miserable) States

Alaska led the nation with the highest level of well-being of all states, supplanting North Dakota, which plummeted to 23rd place. West Virginia remains the state with the lowest well-being for the sixth consecutive year.

The 2014 Gallup-Healthways Well-Being Index measures the well-being of Americans in each state based on interviews conducted between January and December, 2014. This year’s index incorporated a range of metrics categorized into five essential elements of well-being: purpose, social, financial, community, and physical. Based on the well-being index, 24/7 Wall St. examined the states with the highest and lowest scores.

Click here to see the happiest states in America

Click here to see the most miserable states in America

While Gallup’s index is based in part on subjective survey measures, the respondents’ perceptions are often closely tied to outcomes. According to Dan Witters, research director of the Gallup-Healthways Well-Being Index, well-being is closely linked to economic indicators and societal outcomes, such as median household income and teen pregnancy rates.

Witters explained that the five essential elements of well-being are interwoven, and a high score in one category can lead to a high score in another. However, this was not guaranteed by any means. All of the 10 happiest states rated better than most in the purpose category, which measures how much residents like their day-to-day lives and how motivated they are to meet their goals. However, in other categories, such as the financial element of well-being, two of the top states overall fared worse than most states.

Physical health, which together with healthy behaviors, was part of the physical element of well-being this year, is an especially important factor contributing to happiness, according to Witters. In fact, examination of healthy behaviors and outcomes measured by government data suggest this is the case.
In states with high well-being scores, residents were less likely to smoke and more likely to exercise regularly. Residents in nine of the happiest states were more likely than most Americans to have an exercise routine of some kind. All but one of the states with the lowest well-being, on the other hand, had more physically inactive residents compared to the national average.

The states with the happiest residents also had relatively low unemployment rates, and people reported relatively few days of poor mental health. The unemployment rates in all of the 10 happiest states was less than the national rate of 7.4% in 2013. And nine of these states reported fewer monthly poor mental health days than the national average.

A regional pattern is also evident. According to Witters, while the top and bottom states change regularly from one year to the next, they tend to be in similar parts of the country. Witters said states in New England, the Northern Plains and Mountain West regions, as well as Alaska and Hawaii, generally and regularly report very good well-being. Low well-being, on the other hand, is found “around the Bible Belt…the South and heading north up through the industrial midwest.” Witters described this as “a very consistent pattern.”

“The thing about those southern states,” he said, “that really hurts them is that they do a lousy job taking care of themselves.”

24/7 Wall St. reviewed all 50 U.S. states based on their scores in the Gallup-Healthways 2014 Well-Being Index. Gallup-Healthways calculated a national well-being score as well as one for each state based on interviews conducted between January 2 and December 30, 2014, with a random sample of 176,702 adults. As part of the rank, Gallup combined five separate essential elements of well-being. In addition to the index, 24/7 Wall St. considered data from the U.S. Census Bureau’s 2013 American Community Survey, including median household income, poverty rates, and adult educational attainment rates. From the Bureau of Labor Statistics, we reviewed annual state unemployment rates and median hours worked among, both from 2013. We also reviewed 2013 obesity and teen pregnancy rates from the Centers for Disease Control and Prevention. Incidence of heart disease in 2013 is from the Kaiser Family Foundation. The share of the population with low incomes and low access to healthy food comes from the Department of Agriculture’s Food Environment Atlas. Low access is defined as living more than one mile from a supermarket in an urban area or more than 10 miles from a supermarket in a rural area. We also considered state violent crime rates in 2013 from the FBI’s Uniform Crime Report Program. Lastly, we used 2012 regional price parity from the Bureau of Economic Analysis as a proxy for cost of living. All other data come from the United Health Foundation’s 2014 report “America’s Health Rankings”.

These are the happiest (and most miserable) states in America.

The Happiest States in America

Based on the Gallup-Healthways Well-Being Index, Texas residents had the 10th highest well-being in the nation. Texas residents were among the most likely to be content with their jobs and be motivated to achieve their goals, with the state ranking second in the purpose category, one of five elements of well-being in Gallup’s Index. Texans worked 36.3 hours per week in 2013, the most nationwide. This may reflect in part Texans’ motivation and workplace satisfaction. Texans were not especially healthy, however, with an obesity rate of nearly 31% in 2013 and relatively few residents reporting routine exercise. More than 22% of residents did not have health insurance in 2013, the worst rate nationwide, which may have made it more difficult for Texans than most Americans to get the medical care they need. Despite these poor physical health indicators, nearly 71% of adolescents in the state were vaccinated in 2013, one of the higher rates, and less than 16% of adults were smokers, one of the lower smoking rates reviewed.

Unlike most states with the happiest residents, a typical household in New Mexico had relatively low income in 2013, earning a median of less than $44,000. The median national household income was $52,250 that year. New Mexico also had an exceptionally high poverty rate, at nearly 22% in 2013, the second highest nationwide. While many New Mexico residents struggled with financial burdens, they tended to be in relatively good physical health. For example, the obesity rate of 26.4% was among the lower rates in the nation. Residents reported relatively few cases of high blood pressure and high cholesterol as well, which likely contributed to a lower incidence of heart disease. There were 147 heart disease-related deaths per 100,000 people in 2013, the 10th lowest such rate in the country. On Gallup’s survey, New Mexicans rated their physical health and habits fifth best in the country.

Utah is one of only a few states where less than one-quarter of adults were obese in 2013. Residents were also the least likely in the nation to report high blood pressure and high cholesterol that year. Utah residents generally reported healthy behaviors, which likely helped contribute to the good health outcomes and the state’s high well-being. Utah adults were the least likely to be smokers, with only 10.3% reporting the habit in 2013. Traditionally low smoking rates may have helped Utah residents stay healthy and out of the hospital. Between 2010 and 2012, there were less than 146 cancer-related deaths per 100,000 people, the lowest rate nationwide. In addition to strong physical health, Utah residents also liked where they lived, felt safe, and reported having pride in their community — the state ranked seventh in the nation in Gallup’s community element of well-being. Like most states scoring well in this category, Utah’s violent crime rate of 209 incidents per 100,000 people in 2013 was among the lowest in the country.

With an unemployment rate of 3.9% in 2013, the third lowest nationwide, Nebraska residents had the benefit of a relatively strong job market. Nebraskans were also more likely than most Americans to feel content with their jobs, rating their day-to-day contentment and motivation to meet goals — part of the purpose element of well-being — the seventh best nationwide. Workers also reported having just three poor mental health days per month in 2013, the sixth-lowest figure nationwide. While the median household income in Nebraska was slightly lower than the national figure, the cost of living was considerably more affordable than most states. As in most of the happiest states, Nebraska is also a relatively safe state. There were approximately 252 violent crimes per 100,000 people in 2013, one of the lower rates in the country.

Colorado retained its 2013 standing on the list of happiest states, with a particularly high ranking in the physical element of well-being this year. The state had the lowest diabetes rate of all states, ranked second lowest in the percentage of the population with high blood pressure, and ranked third lowest in the percentage of residents with high cholesterol. The state also had the lowest obesity rate in the country, at 21.3% of the adult population. Residents were also relatively well-off financially. The state’s 2013 median household income of $58,823 was the 12th highest in the country. In addition, only 8.6% of Colorado households received food stamp benefits in 2013. Colorado households also had better access to services such the Internet, as 79.4% of residents reported having a broadband Internet subscription, the fourth highest percentage in the country.

As in most states with the happiest residents, Montanans were well educated. Nearly 93% had completed at least high school as of 2013, the third highest rate and considerably higher than the national rate of 86.6%. Montana residents were in exceptionally good physical health, which likely significantly contributed to happiness. Less than one-quarter were obese in 2013, for example, the sixth-lowest rate nationwide. Residents also had relatively low rates of diabetes and high blood pressure. Residents were not especially wealthy, however, earning a median household income of $46,972 in 2013, lower than the national figure of $52,250. 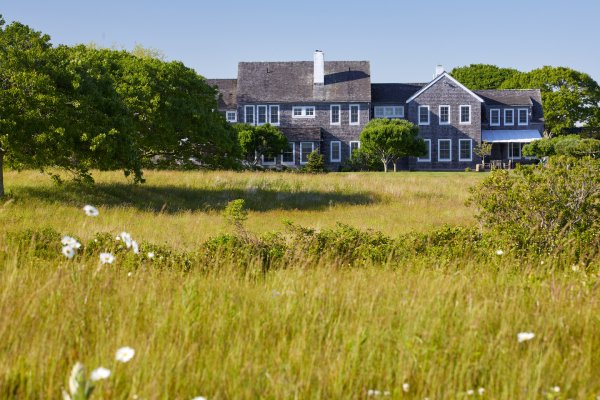 Jackie Kennedy’s Martha’s Vineyard Estate on Sale for $65 Million
Next Up: Editor's Pick