The Surprising Reasons People Buy the PlayStation 4, Xbox One or Wii U

The first customer to purchase the PlayStation 4 (PS4) video game console holds the box at the launch of the PS4 console at the Sony showroom in Tokyo, Japan, on Saturday, Feb. 22, 2014.
Bloomberg—Bloomberg via Getty Images
By Matt Peckham

Infometrics guru Nielsen just published the results of an inquiry into why people are buying the latest game systems from Sony, Microsoft and Nintendo. The results are surprising in part.

Consider the following chart, which breaks the decision-making variables impacting each system into “factors” ranked by survey respondents:

The chart’s results are weirder than they appear at first. Take resolution, the number of horizontal by vertical lines output as video signal, and constitutive of the number of pixels onscreen. Several first-wave, multi-platform games ran at higher resolution on the PlayStation 4 than the Xbox One, owing, everyone in the media’s assumed based on anecdotal developer chitchat, to disparity between the two systems’ processing power.

The presumption is that slight visual differences shouldn’t matter, that you’re just being slavish to detail if you’re obsessed with subtle pixel differentiation. Yet there it is, the topmost reason for buyers of Sony’s console.

And what’s “Blu-ray Player” doing as PS4 factor number two? The Xbox One’s just as capable a Blu-ray system. Is this telling us something about a Microsoft messaging failure? Or wait—isn’t packaged media all but dead? Whether people are really watching scads of Blu-rays on their PS4s or this is just the psychological “want the option” factor is unclear.

“Game Library” is another head-scratcher. The Xbox One’s library is just as big and just as critically acclaimed as the PlayStation 4’s, while neither system offers native backward compatibility. Is this indication of a preference for the kinds of exclusives Sony’s system offers? And looking across the way at Nintendo, what’s the difference between “Game Library” (PS4) and “Exclusive Games/Content” (Wii U)?

I’m also a little confused about “Brand,” which tops the Xbox One’s factor column. Sony’s PlayStation-as-brand is, judging by platform sales across all systems, far better known than Microsoft’s Xbox—unless it’s more a Microsoft versus Sony (than PlayStation versus Xbox) thing.

And what does “Innovative Features” refer to? Xbox One Kinect, a peripheral the company yanked from the system before its first anniversary? SmartGlass integration? The bifurcated operating system (and Metro-styled interface)? Or the list of features the company wound up retracting in the wake of controversy over player privacy and digital rights management?

What this more likely confirms is that perception remains nine-tenths ownership. 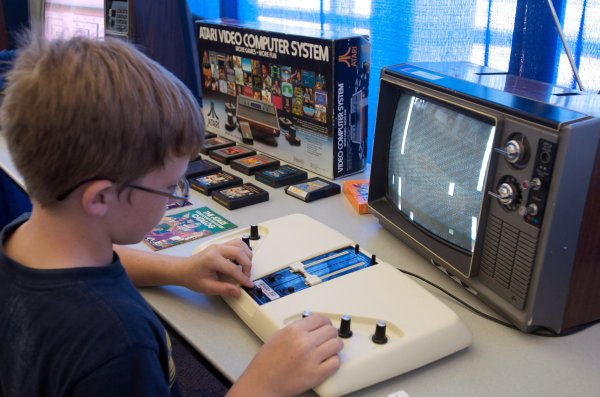 This Computer Learned How to Totally Devastate You at Pong
Next Up: Editor's Pick