An artist's illustration shows a supermassive black hole with millions to billions times the mass of our sun at the center released by NASA on February 27, 2013.
NASA/JPL-Caltech/Handout/Reuters
By Helen Regan

A team of international astronomers has discovered a black hole of almost unimaginable proportions.

“Our discovery presents a serious challenge to theories about the black hole growth in the early universe,” lead researcher Xue-Bing Wu for Peking University, China told the news agency.

The enormous object was formed 900 million years after the Big Bang, and scientists are stumped as to how a black hole of that size could have grown in such a relatively short time.

“Current theory is for a limit to how fast a black hole can grow, but this black hole is too large for that theory,” said fellow researcher Dr. Fuyan Bian, of Australian National University.

Not only is the black hole the biggest ever seen but also it’s at the center of the largest quasar ever discovered. (Quasars are the brightest and most powerful objects in the universe, with this one emitting huge amounts of energy and light as matter is ripped apart by the black hole at its core.)

For comparison, the black hole at the center of our galaxy, the Milky Way, has only about four to five million times the mass of the Sun.

The black hole was discovered by a team of global scientists at Peking University, China, tasked with mapping the northern sky, and their findings were published in the journal Nature.

Read next: This Is How Incredible (and Terrifying) Space Looks in Virtual Reality 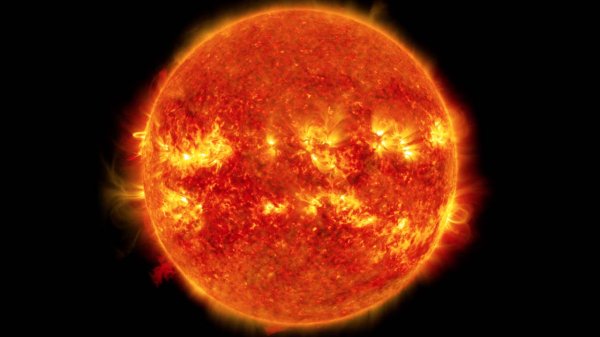 See NASA's Trippy Time-Lapse Video of the Sun
Next Up: Editor's Pick