5 Times Madonna Has Bounced Back

Madonna took a nasty fall during her finale number during the 2015 BRIT Awards on Wednesday night, but then got back up to finish the performance without disruption. The pop icon later reacted to the accident on Instagram, writing “nothing can stop me and love really lifted me up.” It’s not the first time fans have watched her resilience pull her through tough times. Here are 5 other moments Madonna made a flawless rebound.

This 2002 remake of a 1974 classic was a colossal critical and box office bomb. Madonna’s then-husband, Guy Ritchie, directed the film and she starred. Reviews were so bad the film only holds a 5% fresh rating on Rotten Tomatoes and rumors swirled that the director of the original left the theater sobbing. But Madge held her head up, defending Ritchie’s work. “I think the knives were going to come out for Guy anyway, even if he hadn’t ended up with me,” she said. “He had too much success with his first two films. That’s how the media is: eventually they have to pull you down.”

When Madonna and Penn were married back in the 1980s, they were so volatile the media dubbed them the “Poison Penns.” After a series of altercations, the situation reached a boiling point at the end of 1988. One tabloid reported claimed Penn broke into Madonna’s home, tied her up and beat her viciously for hours until she finally escaped. She never pressed charges, but she did file for divorce a few weeks later. Shortly after, she signed a lucrative deal with Pepsi and debuted her smash-hit, “Like a Prayer.”

At the 2003 MTV Video Music Awards, Madonna kissed both Britney Spears and Christina Aguilera during a performance of “Like a Virgin” and “Hollywood.” Many stars instantly, and vocally, disapproved. Rock icon Stevie Nicks called it “the most obnoxious moment in television history.” But Madonna had been planning the moment for a long time, it turns out, and it was perfectly calculated to become legendary. Nicks herself, in her criticism, had to admit, “Madonna will be fine. Madonna is Madonna. She does what she wants.”

To promote her upcoming album Rebel Heart, Madonna posted fan-created artwork to her Instagram that featured Martin Luther King, Jr. and Nelson Mandela incorporated into her album art. “This #rebelheart had a dream!” she wrote beneath the picture of King. An immediate social media outcry followed as observers criticized her comparing herself to famous freedom fighters. She responded with only a half-apology, hitting back at her detractors, “This is niether a crime or an insult or racist!” Her album, most of which is now available due to two major leaks, has gone on to be one of the best-received in recent years.

Madonna intended to release her first single, “Living for Love,” on Valentine’s Day, but due to a series of album leaks, she had to release six songs early. The singer called the theft an “act of terrorism.” A suspect was arrested last month. In the wake of the December leaks and a few more minor ones, Madonna has gone on to receive praise for her awards show performances, which, until Wednesday, were generally without incident. 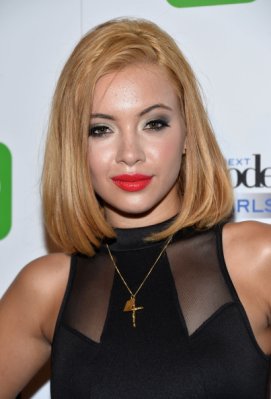 America's Next Top Model Alum Dead in Apparent Homicide
Next Up: Editor's Pick