The Food Ingredient That Could Be Messing With Your Gut

Scan the fine print on almost any processed food in the grocery store and you’re likely to find emulsifiers: Ingredients such as polysorbate 80, lecithin, carrageenan, polyglycerols, and xanthan and other “gums,” all of which keep ingredients—often oils and fats—from separating. They are also used to improve the texture and shelf-life of many foods found on supermarket shelves, from ice cream and baked goods, to salad dressings, veggie burgers, non-dairy milks, and hamburger patties.

Now, a new study released today in the journal Nature suggests these ingredients may also be contributing to the rising incidence of obesity, metabolic syndrome, and inflammatory bowel disease by interfering with microbes in the gastrointestinal tract.

This news may surprise consumers, given the fact that emulsifiers are approved for use by the U.S. Food and Drug Administration (FDA) and appear in many foods otherwise considered “healthy,” including some in which their presence helps to reduce trans fats and gluten, and many labeled organic and non-GMO.

“What we’ve been attempting to understand for the past several years is the increase in metabolic syndrome and inflammatory bowel diseases” that affect digestion, explains Andrew Gewirtz, Georgia State University professor of biology and lead study author. Metabolic syndrome includes obesity, increased risk for Type 2 diabetes, and cardiovascular diseases like heart attacks and strokes. All these conditions, Gewirtz explains, “are associated with changes in gut bacteria.”

The recent, dramatic increase in metabolic-related diseases cannot be attributed solely to genetics, says Gewirtz. Human genetics haven’t changed in recent decades. So he and his colleagues set out to investigate environmental factors that might be responsible, including “modern additions to the food supply.”

Previous suggested that emulsifiers could be implicated. So for the new study, researchers fed mice emulsifiers through water or food. The experiment used polysorbate 80 (common in ice cream) and carboxymethylcellulose, and found that it altered microbiota in a way that caused chronic inflammation. They tested the emulsifiers at levels below those approved for use in food and also at levels modeled to mirror “what a person would eat, if they eat a lot of processed food.”

Gewirtz explains that the emulsifiers appear to disturb both the bacteria normally present in the gut and the gut’s protective mucus layer. Something in the chemistry of the emulsifiers seems to change the microbiota and how these bacteria interact with the intestine itself. The combination, Gewirtz says, sets the stage for inflammation.

Gewirtz is quick to say that these food additives are by no means the “only cause of the obesity epidemic or inflammatory bowel disease.” But emulsifiers may be a factor contributing to excess eating.

He also points to the fact that emulsifiers are “very common” food additives and their increased use in the food supply “roughly parallels the increase in these chronic diseases.”

That emulsifiers appear to be associated with metabolic and digestive problems and are used in some reduced-fat, dairy and gluten-free products that consumers may be choosing for health reasons, prompts additional questions. Next, the scientists plan to test additional emulsifiers and to follow up with tests in people.

Another important point, says Gerwitz, is that these–and many other–food additives are inadequately tested by the FDA. A 2013 study found that almost 80 percent of the chemicals the agency allows in food lack testing information that would help the FDA estimate the amount people can safely eat.

Maricel Maffini, who co-authored the 2013 study, suggests the FDA’s current system of approving food additives could be improved by requiring additive safety to be reviewed periodically and by basing safety information on how much people actually eat. With additives like emulsifiers in so many different foods, some people may be eating far more than the FDA estimates, says Maffini.

Gewirtz and colleagues also note that the FDA classifies some food additives­–including various emulsifiers­–as Generally Regarded as Safe (GRAS), meaning they are not subject to FDA “premarket” review. The upshot is that FDA oversight may not be keeping up with the latest science, adding to shoppers’ existing confusion about what appears on ingredient lists.

According to Marion Nestle, NYU professor of nutrition and food studies, this study “suggests that artificial emulsifying agents may not be harmless and that their use should be scrutinized carefully.”

Read next: Deadly Stomach Bug Infects About Half a Million in U.S. Each Year, Study Shows 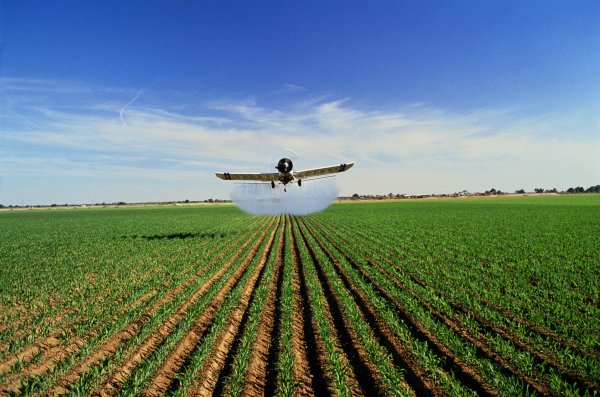 Here's Which Produce Has the Most Pesticides
Next Up: Editor's Pick