There’s a new Power Rangers fan film, and it’s probably not something your parents would have let you watch as a kid.

The 14-minute fan film, described by its creators as a “deboot of the Power Rangers,” has been produced by Adi Shankar and is directed by Joseph Kahn — the guy behind the movie Torque and Taylor Swift’s “Blank Space” music video.

It stars Dawson’s Creek actor James Van Der Beek as Rocky, the former Red Ranger who betrays his teammates to the enemy, and Battlestar Galactica’s Katee Sackhoff as Pink Ranger Kimberly. It also has the kind of blood, gore and sexuality that would be more at home on Game of Thrones. And this isn’t even the R-rated version that was found on Vimeo.

“Not a pilot, not a series, not for profit, strictly for exhibition. This is a bootleg experiment…” the film’s disclaimer adds.

But that’s not how Haim Saban, the owner of the Power Rangers franchise and co-producer of an upcoming reboot of the series, sees it. According to Deadline.com, Kahn, who insists he has not infringed copyright laws, alleges he is being “harassed” by Saban.

“It is just as if I drew a pic of Power Rangers on a napkin and I gave it to my friend,” said Kahn in a series of outraged tweets. “Is it illegal to give pic I drew of a character on a napkin to someone for free? No.”

Vimeo has reportedly taken down the original version after a complaint from Saban Brands, but the “safe-for-work version” on YouTube still exists and has been viewed over 2.5 million times in two days. 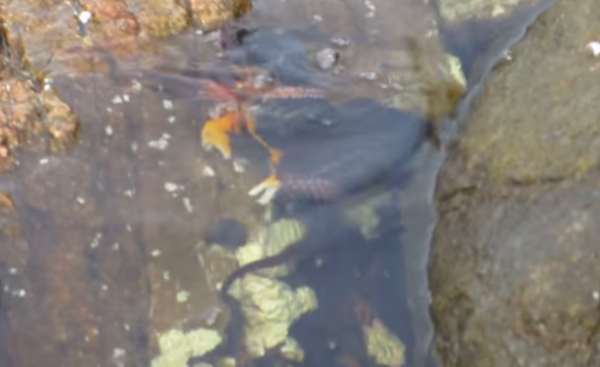 This Video of an Octopus Leaping Out of Water to Devour a Crab Proves None of Us Are Ever Safe
Next Up: Editor's Pick