It’s weird—Robert’s Rules of Order makes no mention of how you are supposed to prepare for the end of Parks and Recreation. Should you stock up on Kleenex? Treat yo self to a spa day? Hail Zorp before he melts off your face with his volcano mouth? Scarf down all the bacon and eggs you have before the looming forever famine? All good ideas. But what would also be wise to check in with the people responsible for the final hour of NBC’s beloved small-town comedy about Leslie Knope (Amy Poehler), a hyper-perky woman with big dreams for her community, country, friends, coworkers and even a few random passers-by. So instead of just re-reading the official description of the episode (“The Parks gang completes one last task together, before saying goodbye to Pawnee”), let’s see what Poehler, her castmates, and series co-creator Michael Schur can tease about “One Last Ride,” which airs tonight at 10 p.m.

It does not play it safe. “We’re taking a big swing,” says Schur. “If you make contact, you hit a homerun. And if you don’t? ‘Wow, what a strikeout!’ A crowd can still roar at a strikeout if the guy took a huge swing, a Dave Winfield swing from the old days. And hopefully we’ll make contact.”

It will help you imagine life for Leslie and her friends beyond the end credits. “To me, the finales that have made me the happiest—and we watched a bunch of them in the writers’ room this year— were the ones where I felt like I could imagine what happened to everybody after the credits rolled,” says Schur. “So as part of the ethos of the show, Leslie has a big talking head-type speech in the finale that summarizes the themes of the show. And obviously one of the themes of the show from the beginning— and she’s said it in multiple episodes—is no one achieves anything alone. She’s a big believer in teamwork and communities and ties that bind. So the idea was: Let’s show how these people affect each other and how they stay in each other’s lives, and hint at the sense that there was something special about this group of people being in the same room at the same time for however many years. The finale is really about getting a sense of what their lives are going to be in the future and how they stay in each other’s lives in the future.”

It is designed to delight all levels of fans—and, according to Poehler, maybe even a non-fan. “I think it’s really just… funny. I’m excited about how funny it is. And how sweet it is. If I could watch two viewers watch the show, it would be someone who has never watched it before and somebody who’s the biggest fan. And I’d like to think that both people would be satisfied. Because I think it’s just, ‘Oh, those are funny, stupid people doing funny, stupid things,’ and then also like, ‘Oh my god, thank god we have an idea of what’s going to happen to Leslie.’”

It provides proper closure, for which the cast and producers are grateful. “It’s emotional like our show has always been,” says Chris Pratt (Andy). “There’s always been a beating heart in Pawnee. It has a lot of respect for itself but it doesn’t take itself too seriously. It respects the characters. It gives the audience what they want and sends the characters off in a way that they all deserve. I think. Maybe we don’t all deserve it (laughs), but nonetheless we get a good ending. It’s great to know when you’re ending the show. Any of our season finales could have been our series finale [because of the low ratings] and that would have sucked. So it’s nice to know that this time this is goodbye. Not only for the TV show-watching experience but also for the process of saying goodbye.”

It touches, radiates hope, and offers metaphorical cheeseburgers. “I found it infinitely moving,” says Nick Offerman (Ron Swanson). “It’s just a nice played-out pastiche of our eight characters’ lives that leaves me feeling very hopeful. There’s no pat ending but instead it has the sloppiness of real life— it has victories and losses, but above all, it has pluck. And so when we fall down, we get up and laugh at our scraped knee and continue getting kissed and eating cheeseburgers.”

And now, a final(e) piece of advice from Poehler: “Bring tissues. Doesn’t everybody want to cry a little bit at the end of a finale? Expect a really funny, familiar, bittersweet, adventurous hour. It is an hour so before you watch the show, so take a shower, sit in a room full of pillows, surround yourself with cellphones, and put tinfoil on your windows and don’t leave your house until you figured it all out. Because I should mention the episode is just a giant logic puzzle and whoever answers it right gets a million dollars from The Voice.”

Most Popular on TIME
1
Murder Charge in George Floyd Killing
2
What Martin Luther King Jr Really Thought About Riots
3
Are You Experiencing COVID-19 'Caution Fatigue?' Here's What It Is, and How to Fight It 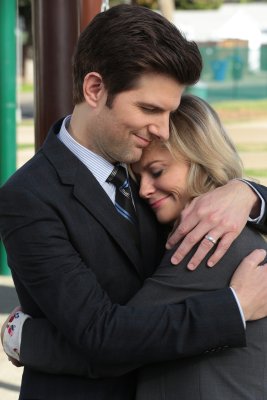