After over six months and over 2,300 airstrikes against Islamic militants in Syria and Iraq, Congress doesn’t feel that much pressure to authorize the President to do what he already is doing.

Though lawmakers are faced with a debate over whether to formally authorize President Obama to take action against the extremist group known as the Islamic State of Iraq and Syria, the fact that he’s essentially claimed that authority under old post-9/11 authorization has kept the issue on the back burner.

“This is unusual because typically you authorize before actions are taken,” says Senate Foreign Relations Committee Chairman Bob Corker, who will helm a hearing on ISIS Wednesday. “In this case, people have been watching for six months and have a lot of questions as to whether they really are committed to dealing with ISIS. So that makes the dynamic here different than probably any authorization in modern history.”

“It’s not like anybody necessarily is going to feel a sense of urgency to act because they know it’s not going to alter the [current or immediate] operations in any way,” he told TIME.

The congressional war powers debate is one many members wished to avoid. Democrats, many of whom were elected on an anti-Iraq war platform, are especially wary of approving any resolution that would give the President the go-ahead to send troops into another Middle East quagmire. And if Republicans vote to approve what’s known as an authorization for use of military force—or an AUMF—they could open themselves up to criticism if the White House strategy fails.

But now, a few weeks after the White House sent over its war powers request, Congress will begin the politically divisive and solemn responsibility of debating the use of military action against a brutal enemy that split off from al-Qaeda a year ago. The first step will be to figure out what the role of U.S. troops should be.

Corker, who says he grabs breakfast with former Secretary of State Henry Kissinger every two or three months and recently held a long phone call with another former Secretary of State to discuss the ISIS threat, is just as confused as a back-bench Congressmen with five words in the White House’s war powers request: “enduring offensive ground combat operations.” The White House’s proposed ban on such activities has led to head scratching across the aisle and will be the focus of intense hearings over the coming weeks.

“That’s part of what people are hoping to understand,” says Corker, who adds that the 700,000 U.S. troops involved in the Gulf War could not classify as an “enduring” operation. “Obviously they haven’t limited enduring defensive [operations and] they haven’t limited Special Ops … But what does that mean?”

“I think ‘enduring’ is defined however the White House intends it to be,” says Senate Intelligence Committee Chairman Richard Burr. “I don’t know whether that’s a week, three weeks, a month … I’d rather go into this with the President asking for more than he needs and not use it as much than not asking for enough and not following through with the mission.”

Some Republicans would like to see the Administration interpret those five words to allow the President to send in ground troops against ISIS. No Republican on the Senate Foreign Relations Committee voted for a Democrat-led AUMF late last year that would have limited ground operations to intelligence collection, operational planning and the protection of U.S. troops from “imminent danger.” Over the past several months, Senate Republicans have met with top Administration officials, including White House counsel Neil Eggleston, and lobbied for expanded authority on the ground.

“It wasn’t just a message to us, it was input from our side too,” says Arizona Sen. Jeff Flake of the Administration meetings, where he says Republicans pushed back on any “strict prohibition” of ground troops.

“What the president put forward reflects a lot of what I think Republicans have wanted,” he adds. “Obviously we didn’t like the product that the Democrats pushed through the committee in December; we thought that that was too restrictive. This is better but we’ll see what works in the process.”

Burr, for example, thinks that the draft should be even broader to explicitly allow the President to send in troops. “I don’t think he does [have that authority] the way it’s written,” he says.

Much of the opposition to the AUMF will come from the President’s party on this issue. While some Democrats are trying to change the draft’s wording to include greater geographic or time constraints, many more will pressure Obama to ban in the AUMF what he said he would in an accompanying letter: “long-term, large-scale ground combat operations.”

“I think it’s quite open-ended,” says California Democratic Sen. Barbara Boxer of the AUMF. “When they say no enduring offensive operations, that means there will be offensive operations. And when you ask, ‘What is the definition of enduring?’ No answer comes back. So that’s a big problem for me—huge.”

There are other concerns from liberal Democrats who believe that the Administration should be authorized to attack ISIS only in Syria and Iraq. But most Democrats on the Senate Foreign Relations Committee have dismissed that idea and the White House’s draft doesn’t include such restrictions.

“I don’t think you do a geographic limitation,” says Boxer. “How can you? These guys sprout all over the world. You’ve got to take the fight to them. Not say we’re only going to go after them in these two places. Then they can go to other places and they know they’re free—that doesn’t make sense.”

Other progressives have expressed concern that the White House draft only repeals a 2002 Iraq AUMF and not another written in the aftermath of 9/11, which the White House has been using to go after ISIS. Maryland Rep. Chris Van Hollen, a member of the House Democratic leadership, has called the 2001 AUMF a “blank check” for indefinite war while hawks like Florida Republican Sen. Marco Rubio, who is exploring a White House bid, has called it the “the cornerstone of the war on terror.”

Most Democrats, however, are pleased that the AUMF proposes a rare self-imposed foreign policy constraint: a three-year “sunset” in which the next president would have to go back to Congress for reauthorization.

“If it’s open ended like that foolish thing the Senate voted for on Iraq—I was one of the 22 who voted against it—I’d vote no,” says Vermont Democratic Sen. Patrick Leahy. “Let’s see what it says though.”

Complicating the political calculus are libertarian-minded Republicans like Kentucky Sen. Rand Paul, who has written his own AUMF that is more restrictive than the White House’s war powers request, including how the roles of troops are defined. With Rubio and Paul, another Senator considering a White House run, on the same panel at the center of the debate—and a wide gulf between many Democrats and President Obama—the AUMF debate could become exactly what Corker fears most.

“What I hope doesn’t happen: that this in some way dissolves into some partisan exercise,” he says. 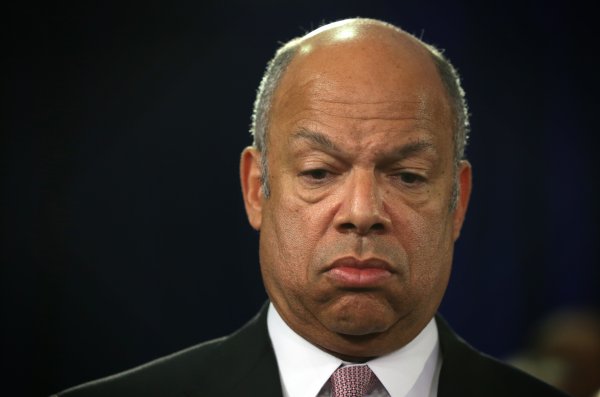 The Battle Over Homeland Security
Next Up: Editor's Pick