How ISIS Runs a City

Demonstrators chant ISIS slogans as they wave the group's flags in front of the provincial government headquarters in Mosul, June 2014.
AP
By Thanassis Cambanis and Rebecca Collard

Nihayet Ojel fled his home in Tel-Abta, a city southwest of Mosul in northern Iraq, not just because he objected to the strict Islamic law that the Islamic State of Iraq and Greater Syria (ISIS) enforces in the area the group took over in 2014, but because of its administrative ambitions.

“ISIS told me they were going to take away my Iraqi ID card and give me one [for the Islamic State] instead,” recalls Ojel, as he waited with his family last August on the side of a highway near Kurdish territory in northern Iraq.

ISIS looks much more like a functioning government than any of its detractors ever thought it would: it is pumping oil, policing streets, collecting taxes, even planning to issue its own currency — much like the national governments it has supplanted in the Syrian and Iraqi territory it controls.

Aymenn al-Tamimi, a researcher at the Philadelphia-based think tank Middle East Forum, has been studying ISIS’s administrative methods. “I wouldn’t say on the whole it’s a better quality of life than most Arab states, but what they do bring, that gives them a one-up, is their totalitarian model,” he says. “It brings this sense of order in a time of civil war.”

In Mosul, the largest city under ISIS control, the group is revising school curriculums, setting tariffs for waste disposal and banning litter.

“Waste is to be placed in a barrel, waste-basket, big black bag,” reads an ISIS communiqué issued to residents of Mosul and the surrounding Ninawa province in December. “Waste is not to be thrown away and gathered in a strip of vacant land, and all who deliberately throw away waste thus will incur a fine of 25,000 dinars [around $22] or be held in custody in the event of refusal to pay the fines.”

In Deir ez-Zor province, along the River Euphrates, ISIS has banned fishing during the spawning season and the use of dynamite for fishing. It has also banned electric current fishing, whereby two electrodes deliver a current into the water, because, “it leads to extermination of many river/water creatures as well as congenital disfigurement for small fish and other river creatures.”

Since it took control of Raqqa in 2013, ISIS has also added new mechanisms of social control: the Husba, or morality police, which enforces the hijab, or head covering for women; a ban on smoking and alcohol; and a requirement that women only circulate outside the home with a male relative. If a man is outside with a woman not his wife, or immediate relative (his mother, sister or daughter), he is subject to arrest and can face lashes of the whip as punishment.

According to witnesses, ISIS has maintained a relatively high level of local services by changing as little as possible in the areas it governs. Most of the civil servants who make the city function remained in their old jobs, still paid by the government in Damascus even though they are now effectively entrenching ISIS in power. School teachers, state telecoms company employees and municipal workers all remain at work, under ISIS control but paid by Damascus. According to several businessmen, activists and ISIS supporters in Raqqa, ISIS has placed its own members at the top of existing institutions, like schools or the municipal headquarters, to make sure employees follow ISIS’s new rules.

In the education system there have been major changes such as the cancellation of subjects like philosophy and the adoption of a new ISIS-authored curriculum for religion. In other ISIS-run sectors the only significant change is that employees must interrupt their work to pray.

Some residents like the way ISIS is running the city. One newcomer to Raqqa, a man who requested anonymity for fear of antagonizing ISIS officials, told TIME he has become an enthusiastic advocate for ISIS. At the beginning of the war he lived in the city of Homs where he ran a mobile phone shop. The 35-year-old man survived the bloody siege of Homs, then moved to Palmyra, and finally to Tal Abyad, a suburb of Raqqa.

Alhough he once sympathized with the FSA, the man did not fight ISIS’s takeover. Initially ISIS members impressed them with their piety and the effective way they policed Raqqa but he was won over by their generosity. ISIS gave the man’s brother an $800 grant to pay for his wedding in the Spring of 2014; it gave the man himself some free diesel; and gave his neighbor money to repair his damaged house.

“The Islamic State is walking in the Prophet Muhammad’s footsteps,” he said by Facebook chat. “They are protecting our boys and girls from vice. We don’t have those nearly-naked girls walking around like in Damascus. No one is smoking here, and it’s almost impossible to commit adultery. They are saving the Islamic community from vice and destruction.”

Another resident, named Abu Yasin, 58, spoke by Skype from Raqqa. He picks up a lot of local news from the customers in the kebab restaurant he owns. He says ultimate authority rests with the provincial emir or governor and with the Sharia court. Anyone who has a serious complaint or problem appeals to those authorities. He has to pay a set tax to ISIS and close his shop during prayer times.

Others are more critical. One activist who fled in August 2014 said that he finally left the city after ISIS started displaying severed heads in the Raqaa main square. “They are [eager] to kill and to cut,” the activist says. “They are just like animals. You see them [ISIS members] laughing and happy when they are standing near those heads. ISIS tries to control the people through fear.”

The activist said he was haunted by the smell of rotting bodies that were left in the downtown area and were sometimes eaten by cats and dogs.

Another activist who worked in Raqqa and now lives in the suburbs considers himself a faithful Muslim but an ISIS opponent. Now if he wants a cigarette he must smoke it in secret. “I need to be schizophrenic to accept life in this city now. I am supposed to smile at the man who whips me. Everything is upside down now. You might be beaten in the street by a foreigner who doesn’t approve of something you say.”

Mohammad Ghannam in Beirut contributed to this story 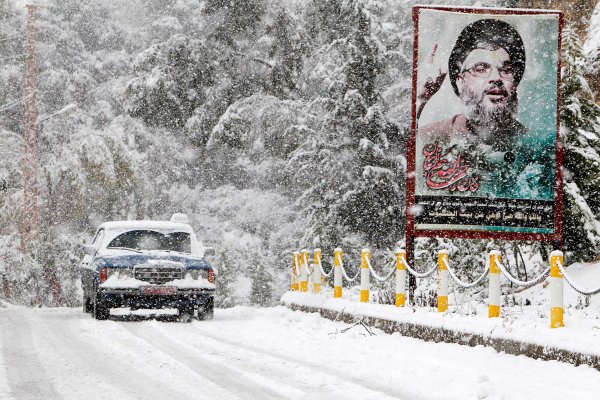 How ISIS Unites Lebanon's Divided Factions
Next Up: Editor's Pick