The Bachelor Watch: Fireworks in the Fantasy Suites

Welcome back to The Bachelor where we join gentleman farmer Chris Soules on his journey to find love. At this point in his mission: possible, Chris has winnowed his herd of potential wives to three contenders — Whitney, the fertility nurse, Kaitlyn the dance instructor and rap enthusiast, and Becca, who is a chiropractic assistant and a practicing virgin. The only reason to bring that up at this point is that tonight Chris is taking all three women to Bali for some alone time in the infamous Fantasy Suites. Since Chris made out with exactly everyone on the show, there’s little doubt that he will jump at the opportunity to jump at the women in privacy. As he doesn’t know Becca’s status, all eyes are on her and the inevitable Fantasy Suite invite.

Kaitlyn: Chris announces his first date with Kaitlyn by saying, “she’s definitely a person I can see having in my life,” which sounds simultaneously ominous and vague. Chris takes her to a temple for what Kaitlyn dubs “a spiritual moment.” But who cares about that when a monkey mounts Chris’ head and then pees on him! Life on the farm has trained him well, though, because Chris is surprisingly chill about a monkey urinating on him. (We can all agree that Bachelor Brad would have punched a monkey for doing that.) Kaitlyn must really be in love, because she doesn’t make him change his shirt or anything before making out with him. He changes his shirt before dinner for sanitary reasons, and that’s when Kaitlyn tells him that she’s feeling vulnerable. Chris responds that he’s “extremely excited” and one can only assume he is talking about the Fantasy Suite. He hands her the card and the key and she agrees to forgo her individual room. Their Fantasy Suite has a bathtub filled with flowers arranged in a heart shape, which inspires Kaitlyn to tell Chris that she is falling in love with him, and he says he is falling in love with her too. While on most seasons of The Bachelor that would be a jaw dropping admission, Chris probably says that to all the ladies.

Whitney: When Chris visited Chicago, Whitney told him that she was falling in love with him. Then her sister ruined it all by refusing to give her blessing to their union, because at the time Chris was still dating three other women. For their reunion, they go on a boat ride in the Indian Ocean and drink and make out and flat-out canoodle, while Whitney spends a lot of time apologizing for her sister (whose behavior does not merit an apology). After jumping into the ocean and kissing in the water, Whitney interviews that she thinks she’s going to marry Chris. Chris has some concerns, though. Namely, he’s not convinced she wants to leave her rewarding job in Chicago for farm life in Iowa. He tries to tell it like it is: there’s nothing in Arlington, nothing to do there at all, nada, zip, zero. (Dude, the Chamber of Commerce is going to have words with you. Four-letter ones.) Whitney doesn’t care, because she is ready to go from making babies to having babies, and she can do that in Arlington. Chris nods his approval. Isn’t it nice that Whitney is willing to give up her career without even asking Chris to give up his other two girlfriends? They make out, and he interviews that he’s falling in love with her. He hands her the Fantasy Suite card and she says something like, “I’ve thought a lot about this … and let’s do it. Check please!” Chris takes her to a much nicer Fantasy Suite than the one he took Kaitlyn to.

Becca: As everyone but Chris knows, Becca has decided to wait until marriage to have sex — and to wait until the Fantasy Suite to tell Chris that factoid. For their date, Chris take Becca on an agricultural tour of rural Bali, because: farmer. Then they hit up a temple and meet a local soothsayer who tells them that they should “make love.” Becca dies laughing, but not for the same reason that Chris does. Chris interviews that he is falling in love with her. (See? He does say that to all the ladies.) After their romantic day spent making out in streams and looky loo-ing at temples, Becca is starting to feel things for Chris. Chris is starting to express some concerns about Becca, specifically the fact that she has never been in love. They have a big talk, but the most Becca can manage is that she “thinks” she’s falling in love with him, but she doesn’t really know because she’s never been in love before. Then Chris hands her the Fantasy Suite card and Becca hems and haws and Chris lets loose with a few nervous giggles. She finally agrees to spend some time alone with him. The cameras follow them into the Fantasy Suite, and while Chris interviews about looking forward to new “intimacy,” Becca finally tells him she’s a virgin. He lets out a disappointed sigh, tries to keep a straight face, takes a deep breath and says, “I respect that,” but his voice rises on the last word like a question. Then she admits that she may not be waiting for actual marriage. Girl, do not lose your virginity on national television. Seriously, that’s like the first rule of Girl Club.

The Morning After: Chris stares contemplatively at the ocean and expresses his doubts about Becca. It’s not about her virginity, though, pinky swear. Becca hasn’t said she loved him and expressed some doubts about moving to Arlington, which is a dealbreaker for Chris. (Bachelor lesson: If we learned nothing from Britt, it’s to lie convincingly.) Chris loves all three women and isn’t sure what to do, so he cries in his hotel suite and stares into the middle distance while using the soaking pool. Then he does the only logical thing and calls in a wingman, which he is contractually obligated to do to justify the expense of flying Chris Harrison to Bali. Chris and Chris have some Chris time and Chris listens patiently as Chris explains that he is falling in love with Becca even though she isn’t in love with him yet and isn’t willing to move to Iowa yet. Then Chris time is over and Chris goes back to staring into the middle distance.

The Rose Ceremony: The Bachelor decides to desecrate Bali’s most sacred temple with their Rose Ceremony, because they can. They all wear color-coded Balinese clothing and Chris Harrison tells everyone to refrain from kissing for the next 30 minutes or so, if they can contain themselves. Chris stares at the three women he spent the last three nights with standing next to each other and breaks out in a cold sweat. Then he calls Becca aside and Whitney and Kaitlyn share some side-eye, because they think he is kicking Becca to the Balinese curb. Becca and Chris sit down for a tête-à-tête, and Becca immediately declares that she’s falling in love with him, which is a nice save. While they are gone, Kaitlyn interviews that she feels bad for Becca, but is really excited too, because she can’t wait to meet Chris’ family and is excited about their future. Uh oh. Kaitlyn is going to get kut for being happy. Sure enough, Becca and Chris return, holding hands. Kaitlyn goes wide-eyed as she realizes her mistake. Chris apologizes for the delay and picks up a rose. He hands it to Whitney, who happily accepts it. The second rose goes to Becca. Kaitlyn nods, because she knew that was coming. She rolls her eyes and lets Chris walk her out, clearly out of contractual obligation more than interest. She won’t make eye contact with Chris as he apologizes. He hugs her, and she’s like, whatever. He mumbles about following his heart, and she is trying not to cry while also undoubtedly relieved at not having to move to Iowa.

Next Week: The Women tell all! 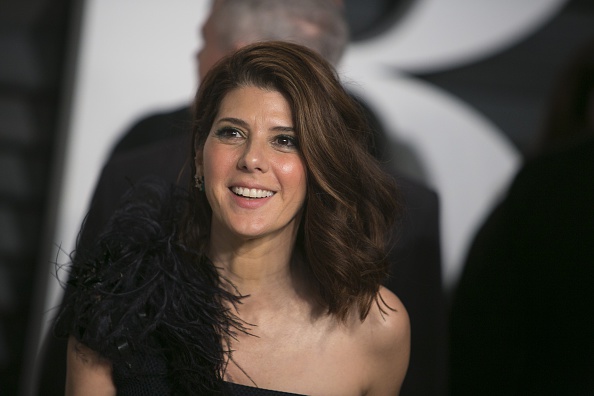 Marisa Tomei to Play Gloria Steinem in HBO Miniseries
Next Up: Editor's Pick