These Four Policy Issues Got Our Attention at the Oscars

Hollywood is never shy about sharing its thoughts on politics, especially on Oscar night. But after the acceptance speeches fade, what happens next? Here’s a look at the status of several issues raised at the Academy Awards ceremony Sunday night.

The issue: The Pew Research Center estimates that women earn 84 percent of what men earn, though the gender pay gap has narrowed since the 1980s. This is the rare issue that also affects Hollywood. The 10 highest-paid actors were paid $419 million in 2013 while their female counterparts earned $226 million, barely half as much.

What Arquette said: “To every woman who gave birth to every taxpayer and citizen of this nation, we have fought for everybody else’s equal rights. It’s our time to have wage equality once and for all and equal rights for women in the United States of America.”

The outlook: Legislation introduced last year would have made it illegal for companies to retaliate against employees who share how much they make, a key step in ensuring men and women are paid equally. It failed to pass the Senate and is dead in the current Republican Congress. Some states, such as Vermont, are tackling the issue, however.

Common and John Legend, “Selma,” on Racial Justice in the U.S.

The issue: Racial disparities persist decades after the events depicted in Selma. In their acceptance speech, singers John Legend and Common highlighted two: the high rate of incarceration among black men and changes in voting rights laws, such as requirements that voters show government ID at polling stations.

What Legend said: “We know that the Voting Rights Act that they fought for 50 years ago is being compromised right now in this country today. We know that right now, the struggle for freedom and justice is real. We live in the most incarcerated country in the world. There are more black men under correctional control today then were under slavery in 1850.”

The outlook: Protests over how police have handled black male suspects have given the cause momentum. The Eric Garner case helped inspire New York City officials to begin to rethink their approach to policing. Activists on the left and right are coming together to push for reforms to the criminal justice system, though voting rights legislation isn’t going anywhere in Congress.

The issue: Immigration reform has been a hot button political issue for years. Millions of undocumented immigrants live in the U.S. and there’s widespread disagreement about how they should be addressed.

What Iñarritu said: “I want to dedicate this award for my fellow Mexicans, the ones who live in Mexico. I pray that we can build the government that we deserve. And the ones living in this country who are part of the latest generation of immigrants in this country, I just pray that they can be treated with the same dignity and respect of the ones who come before and built this incredible nation.”

The outlook: Immigration reform is a thorny issue, and legislators in Washington repeatedly have had trouble finding common ground. President Obama took action on his own, taking executive actions providing temporary legal status to millions of immigrants. Still, those actions remain contested in court and Congress isn’t likely to do much on this issue.

The issue: Twenty-two veterans commit suicide everyday — a rate that more than double the rate in the general population. While the Veterans Affairs Department provides mental health services, mental health experts say many the veteran culture makes many hesitant to take advantage of the resources.

What Kent said: “This immense and incredible honor goes to the veterans and their families who are brave enough to ask for help.” What Perry said: “I want to dedicate this to my son Evan Perry, we lost him to suicide, we should talk about suicide out loud.” 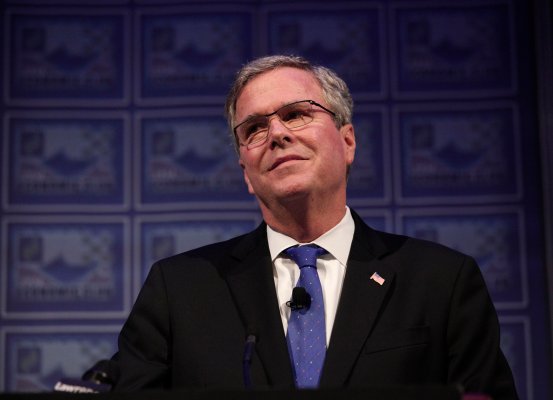 Here's the Only Photo from Jeb Bush's Wedding
Next Up: Editor's Pick