Maldivian Democratic Party presidential candidate Mohamed Nasheed, who was ousted as President in 2012, speaks to reporters in Male, Maldives, on Nov. 10, 2013
Stringer—REUTERS
By Rishi Iyengar

Former Maldives President Mohamed Nasheed was arrested Sunday amid suspicions that he would try to flee the island nation to avoid facing terrorism charges.

Nasheed’s detention led to clashes between his supporters and law-enforcement officers who used pepper spray to dispel crowds, Reuters reported.

Nasheed, Maldives’ first democratically elected President, resigned in what he alleged amounted to a coup d’état in 2012 after protests over his order to arrest a prominent judge.

The 47-year-old had been accused of misusing military power to enforce that arrest under Maldives’ antiterrorism laws, charges that were dropped last week. However, new charges pertaining to the same case were cited in an arrest warrant issued on Sunday.

“I call on the public to do all that is necessary to stop the harassment meted out to me and other politicians to save Maldives,” said Nasheed, who had called on the Indian government to intervene in case current President Abdulla Yameen imposed emergency rule.

Nasheed’s Maldivian Democratic Party called for his immediate release, according to the Associated Press, with party spokesman Hamid Abdul Gaffoor saying in a statement that “Nasheed had never absconded from court, nor has taken the opportunity to flee or go into hiding.” 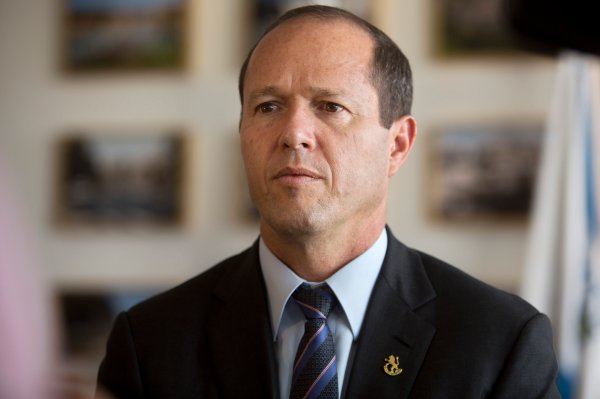 Jerusalem's Mayor and Bodyguard Foil Attack
Next Up: Editor's Pick