The Pentagon Spills the Beans: Stupidity, or Strategy?

Back on Dec. 10, lawmakers wanted to know how many Iraqi troops would be needed to drive the Islamic State of Iraq and Greater Syria (ISIS) from Mosul, Iraq’s second-largest city. Brett McGurk, the State Department’s special presidential envoy for defeating the militant group, said a force of 20,000 to 25,000 would be a “reasonable” estimate of its size.

Spring was the goal for the timing of the counteroffensive, assuming the Iraqi army and their Kurdish peshmerga allies had enough troops and training by then. That timetable was a target freely, if privately, expressed by Pentagon officials since late last year, and surfaced in numerous press reports.

So why did a pair of influential Republican senators explode when they heard that an anonymous Pentagon official had relayed those same two key facts to reporters during a background briefing last Thursday?

“Never in our memory can we recall an instance in which our military has knowingly briefed our own war plans to our enemies,” John McCain of Arizona, chairman of the Senate Armed Services Committee, and Lindsey Graham of South Carolina, also a member of the panel, wrote President Barack Obama on Friday. “These disclosures not only risk the success of our mission, but could also cost the lives of U.S., Iraqi, and coalition forces.”

Graham has served as an Air Force lawyer, so perhaps he can be forgiven for hyperbole. McCain, a onetime Navy pilot shot down over Vietnam and held as a prisoner for more than five years, surely knows better. There is only one way to take an enemy-held city: surround it with overwhelming force, and then attack it until the foe buckles, or choke it until he starves.

Everyone paying attention, on both sides of the fight against ISIS, has known for months that the battle for Mosul is going to be the climactic clash. “Certainly, ISIS knows that Mosul is the center piece of any counteroffensive,” Jack Keane, a retired four-star Army general, told Fox News on Sunday. “They know that. We’ve been knocking off lines of communications and isolating Mosul now for weeks, with air power, too. They know we would like to do that probably before Ramadan or do it after. So, timing is something that they can figure out themselves.”

Both sides also know that it’s better to launch a counteroffensive sooner rather than later, thereby limiting the defenses ISIS can dig and build, which narrows the timeframe down to the spring.

The U.S. military knows that it cannot support its Iraqi allies in that fight without being confident they will prevail. Their training and outfitting will take at least several more weeks. The arrival of the Muslim holiday of Ramadan (June 17) and summer (June 21), pretty much shuts the window on the operation about that time, Pentagon officials say, citing religious sensitivities and heat. By default, that leaves the April-May timeframe cited by the Pentagon briefer Thursday as the soonest the counteroffensive to retake Mosul could be launched if it is to be attempted before fall.

The official from the U.S. Central Command, which oversees U.S. forces in Iraq, heavily caveated the timing of the Mosul operation in his telephone Q&A with Pentagon reporters from Centcom headquarters in Tampa. “The mark on the wall that we are still shooting for is the April-May timeframe,” he said, implying the timing wasn’t new and wasn’t secret. Beyond that, he said more than once, the U.S. and its allies would delay the assault if the Iraqi forces are “not ready, if the conditions are not set, if all the equipment that they need is not physically there.”

The fact is, the U.S. has routinely telegraphed offensive operations before launching them. There was a flurry of stories detailing the “shock and awe” bombardment that would open the 2003 invasion of Iraq before it began. “If asked to go into conflict in Iraq, what you’d like to do is have it be a short conflict,” Air Force General Richard Myers, chairman of the Joint Chiefs of Staff, said in response to a question from TIME at a breakfast two weeks before it started. “The best way to do that would be to have such a shock on the system that the Iraqi regime would have to assume early on the end was inevitable.”

The U.S. military also offered previews of coming destruction before the battle for Fallujah in Iraq in 2004, and in advance of the offensive against the Taliban in Marjah, Afghanistan, in 2010.

Leaking word of such attacks in advance, Pentagon officials say, can convince enemy fighters to abandon the fight. But they concede it can also stiffen the backbone of others. Such a tactic can also encourage the non-ISIS population in Mosul to rebel against the occupiers.

So just how many Iraqi troops will retaking Mosul require? “We think it’s going to take in the range between 20,000 and 25,000,” the Central Command official said Thursday. He wasn’t risking the success of the eventual mission. He was simply echoing what McGurk told Congress more than two months ago. 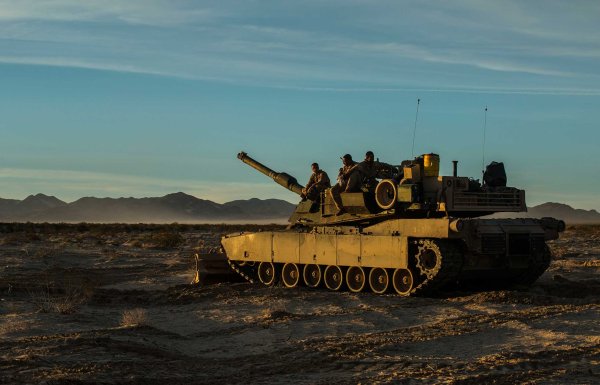 22 Marines Injured During Training
Next Up: Editor's Pick